Stukov, The commander that could. No longer viable defensively through changes?

What changes made Stukov unplayable, I wonder? He literally got only buffs. The only nerf is bunker cost 300 -> 400, yes, slows down mass bunker strart a bit, but not that big of a deal overall.

His bunkers have been adjusted from 6 troops in them to size and it feels liek even their armor values have changed.

Bunker cost so much, how about making more Barracks and quickly spawning infested from them to defend when needed?

That is one way to spam and hold his own I guess. But, It leaves you lack luster trying to defend multiple doorways like that.

His bunkers have been adjusted from 6 troops in them to size and it feels liek even their armor values have changed.

I have only ever seen nerfs to Stukov since his release. His bunkers have been an issue since week 2 but, then they sold a crap ton of him. Now that everyone owns him they made changes to him making him unplayable where he was legitimately on par with others. Nerfs to duration aren’t what I am complaining about. I care that defensively this commander can no longer hold his own with the mechanics put forth where other commanders like Mengks and Karax just put him to shame. More fun to someone or a collective isn’t the world. Nor do most of us like to accept these alterations to loved commanders.

You’re just wrong. The only nerf to bunker is cost increase. There was a supply increase at some point, but it was reverted. Mech only buffs.
And Stukov can hold easily, proven by replays.

Ill watch the replays but, i bet the other player set defense and helped to carry where Stukov couldn’t are these on brutal normal?

Yes, regular Brutal.
Tychus helped first night and focused on clearing after that.
Kerrigan also helped from time to time, but she just wasn’t powerful enough to push at night time, so she just got nothing to do. That was longer, I almost killed as much infested structures as she did.

Your mmr is 3k+ and have max stats with everything unlocked on him. That Tychus shredded that map. Ill watch the other now.

My ally Stukov literally defending against anything just with a lot of bunkers. Even the “Just Die” mutator can’t stop his advance. 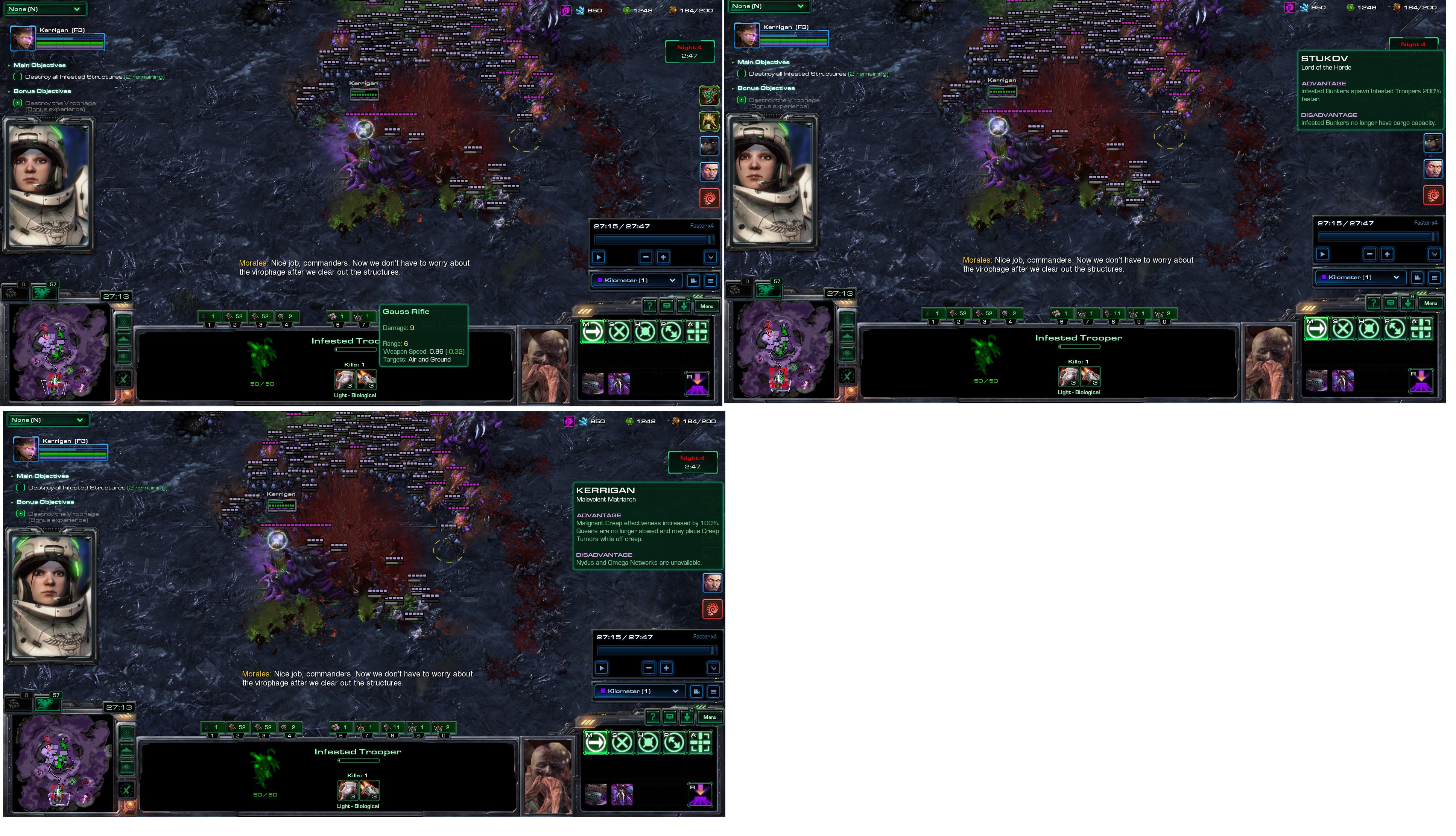 Okay Kerrigan wasn’t all that bad. She helped the entire time. I used the same strat you did but, my teamates and I killing the stuff outside weren’t as effective or really up to the task. I didn’t build a second command center but the rest was close. Maybe they just made trying to prestige him a horrible grind to get there.

Honnestly many commanders are a pain to prestige. Stukov got off easy as his P1 is decent to level with, mass DB is able to give him standard or mech with P1. Bunkers like many strats became less effective overtime due to AI changes, like getting weapon upgrades (I could be remembering this wrong, but the comps didn’t change, but the AI changed? To be semi more intelligent sometimes).

As far as I know there hasn’t been any ai changes, but there’s been a number comps added, namely any of the ones that use SC1 units. But the big one was that on hard and brutal Amon’s units started to get ability upgrades (like Stim and Combat Shields for the Marines)

As well, many of the buffs over time for CO units got added on to Amon’s versions, things like the Yamato charge time.

Had a decent teammate this go round I guess. I guess if you break the main structures outside the front gate the game goes a little easier. Still janky to get an armory just to armor your bunkers sucks. ttps://drop.sc/replay/16986411

You’re just wrong. The only nerf to bunker is cost increase. There was a supply increase at some point, but it was reverted. Mech only buffs.

Not sure, but I think they also reduced the infested marines’ spawning rate from bunkers, so you get less marines now.

@OP Stukov P3 can hold DoN np, at least until 3rd night, and by then the map should be pretty much over. Tell your friend to use bunkers, and get some points into broodling mastery to be able to cast it more often if infested marines get overwhelemed or bunkers get attacked. I don’t really know what the appeal was into investing points into volatile infested in the first place, but with p3 it seems even more useless - but that’s another story.

And regarding bunkers being empty on p3, there’s a double-edge to it. On one side, they can’t be used to defend per se, since they no longer attack enemies. You no longer have 6 marines in them, you get marines spawned one at a time, and those aren’t as powerful, because they’re fewer and don’t have the bunker protection. On the other hand, since bunkers no longer attack enemies, they’re no longer targeted by them eitherm if they have other units to target nearby - so it might actually increase the bunker’s chances of survival considerably.

Stukov is not so bad. He can solo every map. For Dead of Night, I did it with P3:

I was about to write that Stukov might have trouble with the current mutation since his diamond backs would not be good (first strike) but …
Several players have chosen him already to do this mutation by swarming Amon with endless free infested and were happy with their choice.

Thanks for sharing the replay. Here’s some things to help you.

Check out starcraft2coop.com for more and also CtG and Hunter on YT.

stukov is one of the must haves for some weekly mutations