Hi, I am trying to learn how to beat an elite computer on a skirmish map against
all the teams but specifically me as Protoss vs. Terran I’ve been trying over and over and I just can’t seem to figure it out does someone know of a step by step guide or something like that, that could help me out by any chance please, ok thanks in advance.

I was playing not a lot, but frequently vs AI and growing my skill (mainly macro).
However, at some point I learnt a beauty of Disruptor and it is the only unit that allowed me to beat Elite AI, and as Zerg or Terran I’d certainly lose.
I’d suggest you using disruptor, after a short practice you should be able not to blow up your own army, and use it to kill first enemy attack and either continue going economic or counterattack.

Also feel free to share your replay, you can post it on drop.sc [website which automaticly analysis replays and makes it easy for sharing] and give us the numbers of the replay.

Hi, I made a video just for this post.

Just take a probe, go to the front of the bots natural (not too close) and build a proxy pylon, 3 gateway, then another probe, then another gateway, THEN a final pylon.

After that, rally the zealots to the opponent AI nat. Here is a youtube video. 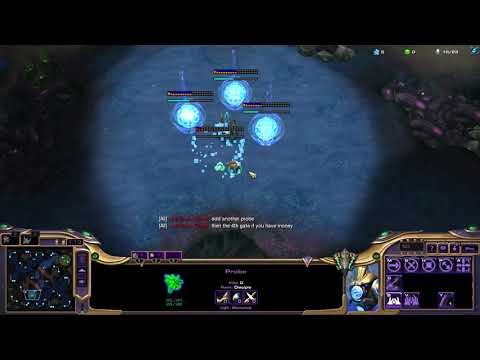 Hi I tried what you said but in the beginning part of the game I just cant push disruptors out fast enough but then I turned it down to Harder and was able to beat a zerg comp the replay is on drop.sc #### Rubberrbbutt VS A.I. 1 (Harder) 31 Aug, 2021 2:09 Am but I don’t know how a person will find the replay there because on that site I did not see any search bar but anyway I copy pasted the name for you after I uploaded it, it is ( Rubberrbbutt VS A.I. 1 (Harder) 31 Aug, 2021 2:09 Am), ok thx again.

That is a correct way of presenting links (preformatted text, or ctrl e), saying just date may be not enough, in case I checked drop.sc too late ^^
https://drop.sc/replay/19904424

I’ll have a look and edit post with anything I notice. Well, I already notice the match is too long.

You basicly were crushed by harder AI, so I’d suggest practicing vs it first, before moving to elite. The victory was allowed only because thanks to infinite minerals, your opponent have filled their supply limit with over 150 workers.

Note: I am a more experienced player and know what to focus on, and pay attention to structures that just finished production, what allows me to be faster. It comes with practice. You should be able to catch up by using shortcuts and control groups.

As you can see on the replay I go straight to robotics facility and start producing a few disruptors and colossus (with lance upgrade), mass stalkers and go straight at enemy. Unfortunately enemy Terran turned out to be mass tanks (which counters my composition), so I lost pretty hard. However, I continued stalkers production and started massing immortals what allowed me to push again and win.

In the example I use mouse, ctrl and 1 (for army control group) and after my army being destroyed for first time, I started using shift for stalkers production.

Hi thanks for the reply, I know about doing it this way in the video, though
I never actually watched the video but I know what it is but I
don’t always want to rush in the beginning of the game I wanted to learn
how to actually outplay them in a longer game, thanks again.

And for Dallarian Hi thanks for all the info I’ll have a look at it and practice
a bit more, thanks. It might take me a while though because I am addicted
to Diablo III and only practice Starcraft inbetween lol, thanks again.