Based on this week’s status from overbuff, Ana has higher pick rate in all ranks above Gold and that’s the part I’m okay with. Doomfist has low pick rate but he’s also very strong.
But on th other hand,

Mercy has been unbalanced for almost a year now. And all you did was throwing some random nerfs out there and see what happens. Then you were too proud to accept that you messed up and decided to keep messing with her and she basically got worse and worse with every patch

All I’m asking for Mercy is her to be a normal hero.

The problem is, they can’t fix heroes. It’s happened to Symmetra, Sombra, Hanzo, and probably Torb soon. They just try to work around the main problems of the hero but by doing so they just create more.

The problem is, they can’t fix heroes

And I think this is why there is something called Overwatch Forums.
There are lots of amazing ideas for Mercy out there.
If they aren’t gonna consider any of them then they should probably close the forums

When her pickrate drops winrate will rise. She will be used in Pharah-Mercy, double sniper, pirate ship…
However the last nerf was too much. 55 hps would have been fine.

55 hps would have been fine.

I believe that the problem isn’t really her healing.
It’s not like “okay we dropped her hps by 5 now all the mess we made over the past year is fixed”

However the last nerf was too much. 55 hps would have been fine.

Her healing was never a problem

I don’t see any problems with Mercy but if they had to nerf her it should have been less severe.

And I think this is why there is something called Overwatch Forums.
There are lots of amazing ideas for Mercy out there

Blizzard are just too proud of themselves to use community’s ideas. They make changes, nerfs and buffs to things in their own judgment, in what they think is good or bad, in their closed server which is completely unrealistic…

Mercy has been top pick for the longest time, I think you can manage a bit of a statistic set back, and we all need a Mercy break. You’ll be fine. Besides, the meta hasn’t settled yet, Mercy will come back eventually.

Mercy has been top pick for the longest time, I think you can manage a bit of a statistic set back, and we all need a Mercy break. You’ll be fine. Besides, the meta hasn’t settled yet, Mercy will come back eventually.

I ain’t complaining about her pick rate. I just want her to be a normal hero like tracer. Not OP not weak, and fun to play.

Saying that we need a “Mercy break” isn’t really a good excuse for ignoring the fact that she is a mess right now. She’s been a mess for almost a year.

I disagree with this logic. The purpose of nerfing, buffing and balancing is to place heroes from certain class on the equal field. When there shouldn’t be tings such as “don’t pick specific hero cause we’re gonna lose”, or must-picks.

We don’t need a break from Mercy, we need to feel that we can play any healer and feel like we have an impact and we’re viable for the team. AND MOST IMPORTANTLY WE ARE HAVING FUN.

Mercy has been top pick for the longest time, I think you can manage a bit of a statistic set back, and we all need a Mercy break.

But it’s also to do with a lot of people who were “boosted” into higher ranks where they never should have been because of how powerful Mercy was.

With Mercy being more in line with Ana/ Moira, the people who did abuse her will now be dropping to where they should have been

Had a game the other day where someone went from low Gold, to Masters 1 tricking Mercy after her rework.

This season after the Mercy nerf, they dropped from Masters to Plat playing Mercy

well, yeah. she’s absolute trash now. she can’t outheal ANYTHING and it literally takes, like, 5 minutes to regen a tank.

after the nerf, the only aspect about her kit that isn’t garbage is rez. that’s it. she’s literally just a rez bot.

Do you feel like Mercy is underrepresented in Platinum? 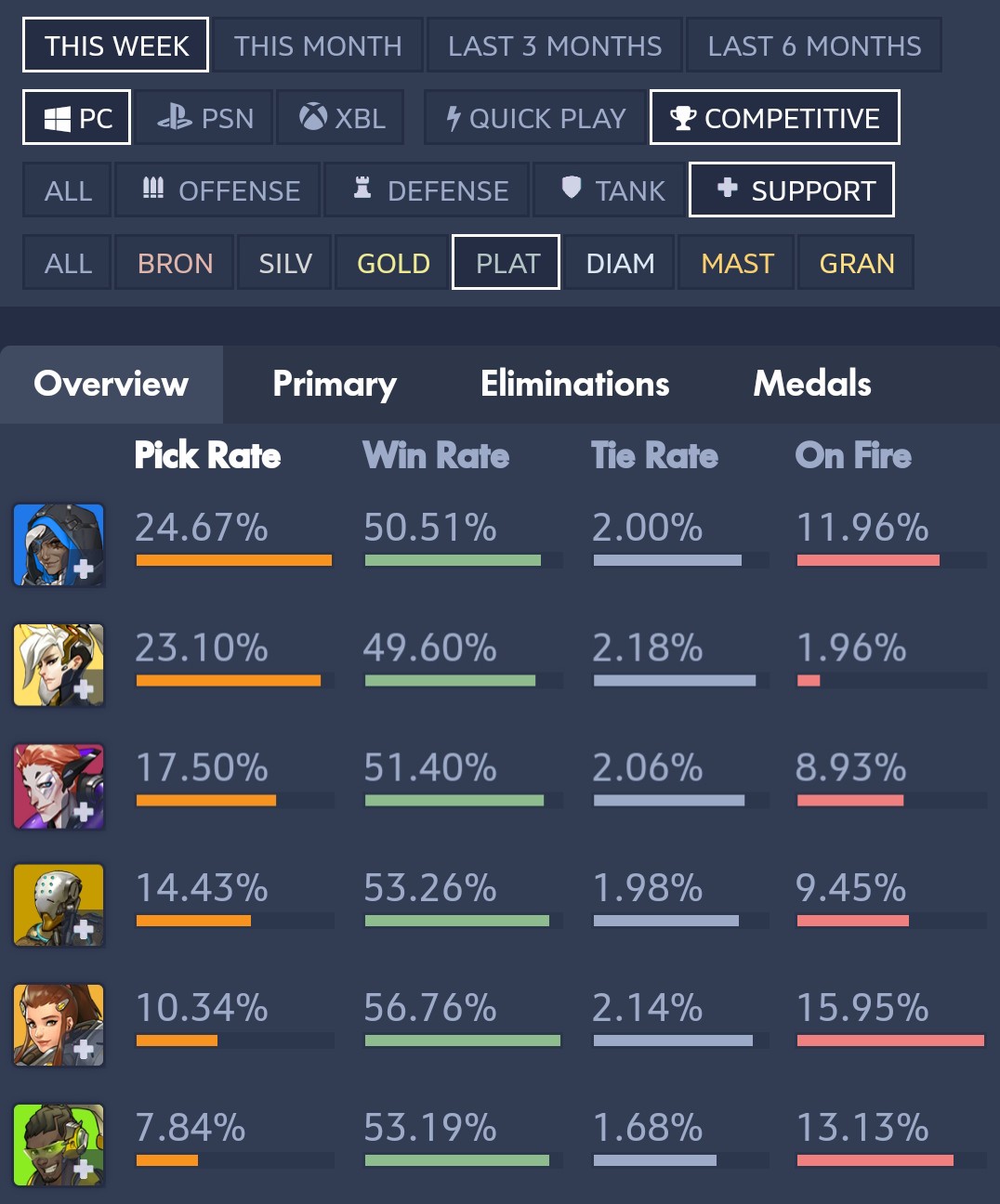 I do understand ur points but there are two things that made Mercy kinda not abusable
Firstly, during her must pick time both teams had Mercy so they didn’t have the advantage over each other on that part.
Also they removed performance based sr system so no one can abuse a character. Like people used to do with mass rez

Based on this week’s status from overbuff

Kind reminder that overbuff takes information only through public profiles, something a lot of people don’t use.

I wouldn’t take this site’s word as fact anymore.

so a hero being nerfed into the ground to the point where she doesn’t even have good healing anymore is justified because we “need a break” from her? that makes no sense.

I mean even factoring in Mercy’s pick and win-rates and while it’s much lower than it used to be, it’s nowhere near any level that we should be worried about (at least currently).

Ana is currently the dominant pick, but it’s not like Mercy is a throw pick.

That on-fire rate hurts my soul though.

Will they ever fix it for us?

Ana is currently the dominant pick, but it’s not like Mercy is a throw pick.

Mercy is not so far from being troll-pick.

Even though her healing is trash right now, OP REZ and Survability via Valkyrie keep her from being completely useless.