There is 0 excuse for it.

How do you know its his fault? After all you play as a team you lose as a team.

Also how is this forced winrate anyway? That guy would not be in your time if it was true. Nor would forced winrate be responsible for his performance.

“Nothing is different!” I can hear you say.

This is how you deal with forced 50% winrate

On top of that, what does stop OP to find friends to play and win with them?

Well to be fair, it’s not like there aren’t ppl who achieve 60%+ wr in solo q either.

What are thou, a developer to know what is happens or not?

Plz explain the 50% win rate to me General Discussion

I’m not an engineer, but I can take a crack at this. The forced 50% win rate discussion is weird and complicated because it’s both true and not true at the same time, and people often inject their own biases very heavily on games to support what they think is happening to them, usually to assign blame for a loss to an external source (in this case the matchmaker) because it’s an easy thing to do (the matchmaker can’t defend itself after all!). First, let’s discuss what forced 50% isn’t. Force…

Spoilers: it’s a perception created by personal biases and the law of large numbers. It’s not something coded into the game.

How are they doing this?

Map control, baiting the enemy, good sustain dmg and not dying as pilot form. It gets harder in GM since they focus the pilot better once she Self-Destructs.

I have no experience playing D.va so it’s good to learn.

You should not be playing jaina if you cant do more than 7k dps in 15 minutes.

Useing hero dmg as a indicator that someone is bad with him is invalid argument since you dont know what he was doing to be that low. She properly had to clear up mercs and lane minions cause those who are better then her to do it refuse to do it and people ignore lanes and expect others to do thier job.

Without any replay to proof how a mage could be that low in dmg its just an empty statement with no proof to back it up.

Forced 50% is honestly a cow that’s been milked to the point of no return.

Find something else to blame your losses on.

There is no reason in this game to force win rates. Stop matching people with 32% win rate with 56% players. It does not even anything out.

At the end of the day, whatever matches the Matchmaker gives you it’s still gonna be random to every letter of the word “Random”.

Matchmaker can’t predict it. There’s many factors that can mess up an ally in your team causing them to drag you down with 'em and i myself have given up hope that preciesly that will change any time soon.
We just gonna have to live with it and keep on rolling the dice in SL.

Storm League is a gamble all the way up to Master League, after that every single step you take and every call you make with your hero is on you.
Keep Rolling the dice and hope you hit the mark.

Accept a loss and move on

Why do people have such a hard time with this? Its ok if you lose a game whatever the reason. Accept that you lost and move on. No people wanna argue about it and blame everyone else.

If I left this cherry-picked quote as is, people might agree with the sentiment and otherwise find it ironic that such a statement is being expressed by someone upset by a loss and blaming everyone else.

If I included the other half of the post, then that would put better context on what you actually meant.

A 32$ winrate is a cherry-picked stat; it could be a seasonal low from someone that finished 1/3 in their placements just as much as it could be 32/100 or 320/1000. It doesn’t indicate role, preferred heroes, or a number of other things that typical complainers neglect because they’re too focused on the wrong thing to have a better impact in their own games.

Esp if they’re the sort just looking for a reason to give up.

Of the times I’ve seen you post, most of them are complaints and ones usually aimed at “matching” with this topic just being par for the course. While aspects of the game are team-based, there’s a difference in outcomes that happens between players that keep on compared to those that don’t; a difference between players that think themselves ‘good enough’ and those looking to ever get better.

What I typically see is that those are look to blame anything else (inanimate or not) tend to hit a cap, and at that cap they get stuck and keep on complaining that they’re stuck. When I see players that ask for advise, or ask others to check their replay for tips, or suggestions on heroes/builds/etc etc, then then climb.

As a healer/support main, that role can arguably be padded and ‘carried’ by other players because their usual fixation is on simply healing, or at least attempting to keep other players alive. They may neglect waves, mercs, objectives, opportune gank or camp invades, etc etc

If someone is just going for cherry-picked stats then… 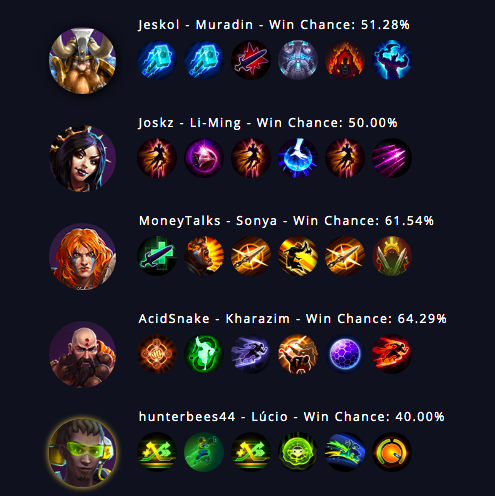 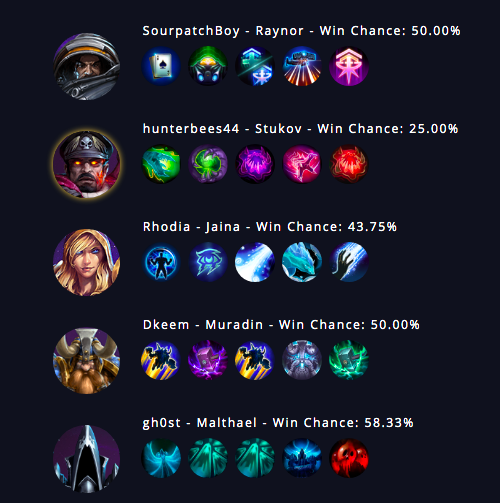 What happens when you’re the bottom rung of your own games?

Now for point of clarification, the point of posting this is because they are cherry-picked stats. There isn’t context, a hint of win or lose, the enemy composition and a lot of details that matter. However, in those select games you had lower contributions than on other averages, so the system Heroesprofile uses appraised you at low, if not the lowest in those games.

Because player performance can swing wildly – your own games stats can be seen as examples of that – the system can’t “force” winrates as people like to theorize.

The usual gimmick of that complaint is that people make those complaints because that’s all they know how to see. They don’t see how to contribute more in their games (get more seige, make calls, ping retreats, etc etc) they don’t know what the rest of their team is doing (because they’re not with them) they don’t know how to inspire their team to try a bit harder and coordinate a turn-around, and a number of other stuff that does matter.

The game doesn’t know if a healer or tank or ‘siege’ hero got carried, or had a good shot-caller in game to follow, or had a solo carry, or luck by winnions or any of that. Since it doesn’t know those things, it can’t use them to ‘force’ win rates.

For the players of this game
that don’t know how to look for that stuff,
they can’t see how to stand out from all the fluff,
and content themselves with things to blame.

For the players of this game
that don’t know how to look for that stuff,
they can’t see how to stand out from all the fluff,
and content themselves with things to blame.

This guy’s been saying the exact same rhetoric on this forum for years. He complains because he plays this game. He’ll stop complaining about this game when he stops playing it. If he plays LoL, he’ll find some way to complain about that game.

The complaints have nothing to do with Heroes of the Storm when they’re as irrational as this. This is just a person who likes to be angry.

or they just go on to more games and continue to cry about forced 50% in those games too.

It’s not as if LoL doesn’t have people complain about newbie que, reports nothing, small indy team, forced 50%, broken heroes, heroes unchanged after 3+ years, or posters that end up making fun of those tropes.

Regardless of game, the same type of attitudes lead to stagnation and people that resort to complaints and expect something else to magically fix what can often be a ‘them’ problem tend to keep on doing that until they reach the magical rank of Enlightenment and figure out how to get around all that.

Because it obviously takes Super Sadjen Zhaggy Heavily Cultivation Jiant Yobot ckharma to realize such a profound mantra of success that people have to transcend reality to realize the basic stuff they were told all along actually does matter.

Every “toxic” player that leaves may give the remaining players comfort as “good riddance” to the game. But every person who leaves makes HOTS one step closer to dying unless somehow more players come because that one person left