My opponent just won by running out of cards... please help me understand what happened

I’m a casual player, just back into hearthstone relatively recently after a two year break (it’s difficult to accomplish reentry). I was just playing a warlock who had all sorts of strange cards that quickly ran his deck down. It was happening so fast, I couldn’t really follow, but I kept thinking, he’s screwed, he’s going to run out of cards here in the fourth or fifth round of our game. How did that happen? It wasn’t clear to me. And then all sorts of weird stuff was going on, he dumped his deck, redrew it, a bunch of 1-1 minions came out, he ran out of cards, but, shockingly, I exploded. What? How the F did that happen? It was absolutely ridiculous and made me want to quit Hearthstone again on the spot. It’s the first deck I’ve played against in 200 games back that I could not follow at all what happened. I tried to search online for “hearthstone deck that wins by running out of cards” but all I could find was a reference to Mecha’thun which is now wild. Please help me understand what deck I played! It was maybe the most annoying game of Hearthstone ever, which is saying a lot. Thanks for your help.

That’s mechathun’s effect. When it dies, you win the game when you have no cards at all.

If he dumped his hand and drew a new one that’s Plot Twist.

But you almost certainly lost to a Mecha’thun deck. They dump cards as cast as possible because you win by having no cards in hand, deck, and board when it dies. It’s a combo deck; you beat it by killing him too fast, or preventing him from playing the combo (discounts to play Mecha’thun plus usually Bloodbloom to pay for Cataclysm) in the right order.

the card that killed you : 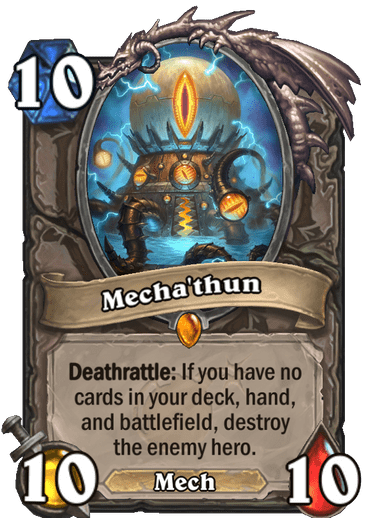 The card that made him put cards from his deck in his hand and then redraw : 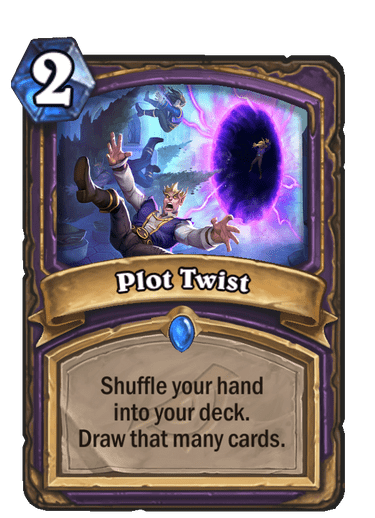 The card he played to empty his hand and kill his board on the same time : 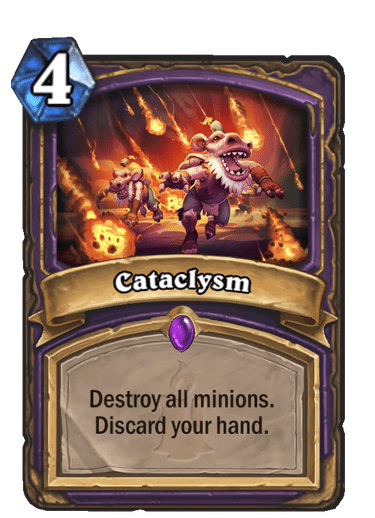 Sorry, should have clarified that I was playing standard, if that wasn’t clear.

There is no such deck outside mech’thun

Do you use any Tracker? You should, if you don’t know what happened you can always review the match.

sounds like you played against quest warlock and saw plot twist. and if you havent seen plot twist before and didnt check his deck count it can very much look like he dumped his entire deck. you then likely lost to a 0 mana malygos

I could be utterly wrong here, but the comment about 1-1s makes me wonder, could this have been a Mogu Cultist deck?

O lol, that is indeed the only explanation then.

Mechathun decks no longer use Bloodbloom…it was nerfed to 4 mana. In fact, that’s WHY it should have to use something like Dollmaster Dorian.

I think most likely you were mistaken, thinking you were in standard but really in wild, because it was a Mechathun deck. But I guess it’s possible it’s something super obscure like Mogu Cultist…

According to the Wiki for Mogu Cultist, in standard, " you can use [Glenda Crowskin] on Warlock. You can summon 6 copies, kill off Glinda with [Grim Rally], then play the last (Echo copied) Mogu Cultist. This combo is not possible on one turn normally, so you will need to draw Glinda with [Tome of Origination] from [Supreme Archaeology] to make this combo possible, which you can guarantee using [Baleful Banker] with an empty deck."

Glinda is also wild tho, right?

, " you can use [Glenda Crowskin] on Warlock

I would do it like this: you need 2 Plotwist, 2 Mogul cultist, Fel Lord Betrug and Barista Lynchen.
You opponent needs to cooperate, it’s a 3 turn combo.
You need Fel Lord Betrug on the Field and no other minions in your deck and hand, except Mogul cultist.
Turn 1 Mogul + Barista, Mogul must survive.
Turn 2, play Betrug, he needs to survive, as does one Mogul.
Turn 3, plot twist 2 times, 4 Mogul Rushes will appear on the battle field. (5atm)
Trade Barista and Betrug and play your other 2 copies form your hand. Voilà.

Thanks so much, I have a lot to learn. I’m sure I was in standard, I only play standard and didn’t change anything. I don’t know about trackers, I’ll research and get one, if you have a suggestion of a good one please advise.

Sorry everyone, MeltedWater is right, I just went backed and looked at the deck I was using, and even though I was sure I built a deck I could use in standard, there were a couple cards in it that were wild-only, so I was clearly in wild. My bad. So I’m sure Mecha-thun makes the most sense here.

its cool man…and its okay, I hate that stupid deck too.

Hearthstone Deck Tracker is the one pretty much every streamer uses. I highly recommend.

Could it been possible you were playing wild accidentally?

Yes, I had to create all new decks, because my old decks were all obsolete, but I did just discover that I somehow put a few wild cards in that Priest deck I used, so I was indeed wrong about playing standard, which was part of my big confusion here.