Will PS5/Xbone have mouse and keyboard options for Diablo 2 resurrected? It only seems fair for consoles to have access to different controls if PC does. Thanks for info if any.

No it won’t but PC players will most likely use a controller.

In D2 original you can only move on the 8 axis points of N, S, E, W and the four points in between like NW, NE etc.

In D2:R Keyboard + Mouse is restricted to the same axis limitation to reflect the nostalgic feel of the game.

However, switching to Controller support on the PC version changes this so it becomes like a modern game and the control of your character is far greater, finer and granular than the 8 axis points.

Many PC players myself included when we played the Alpha noted that controller support with a greater degree of control really enhanced D2:R.

Thus I can’t see K+B coming to Console where the perceived greater control method during Alpha was Controller.

If they did do it then on console it would be still be limited to the 8 axis points and whilst representing the original would be awful on console.

Thank you for you quick response

No, they will use mkb. Most players are already used to it. Teleporting via mkb > controller everytime. Not to mention point and click mechanics on skills like blizzard. I guarantee anyone playing if given the option will use mkb and when people craft enigma. Maybe new players to d2 will use controller.

Did you play the Alpha or have read/watched the feedback from streamers who played the Alpha?

For all the points above controller has an advantage over K+B for D2:R. It has more functionality and therefore the opinion is a lot will use a controller.

But that was not the OP’s question but it is a factor in that if controller has far greater movement capabilities then I can’t see them introducing K+B to Console given D2:R was never on Console in the first place.

I guarantee anyone playing if given the option will use mkb and when people craft enigma.

Go and watch streamers opinions on D2:R…loads of them who are PC master race and only use K+B for PC games advise controller support is far better in D2:R on PC. 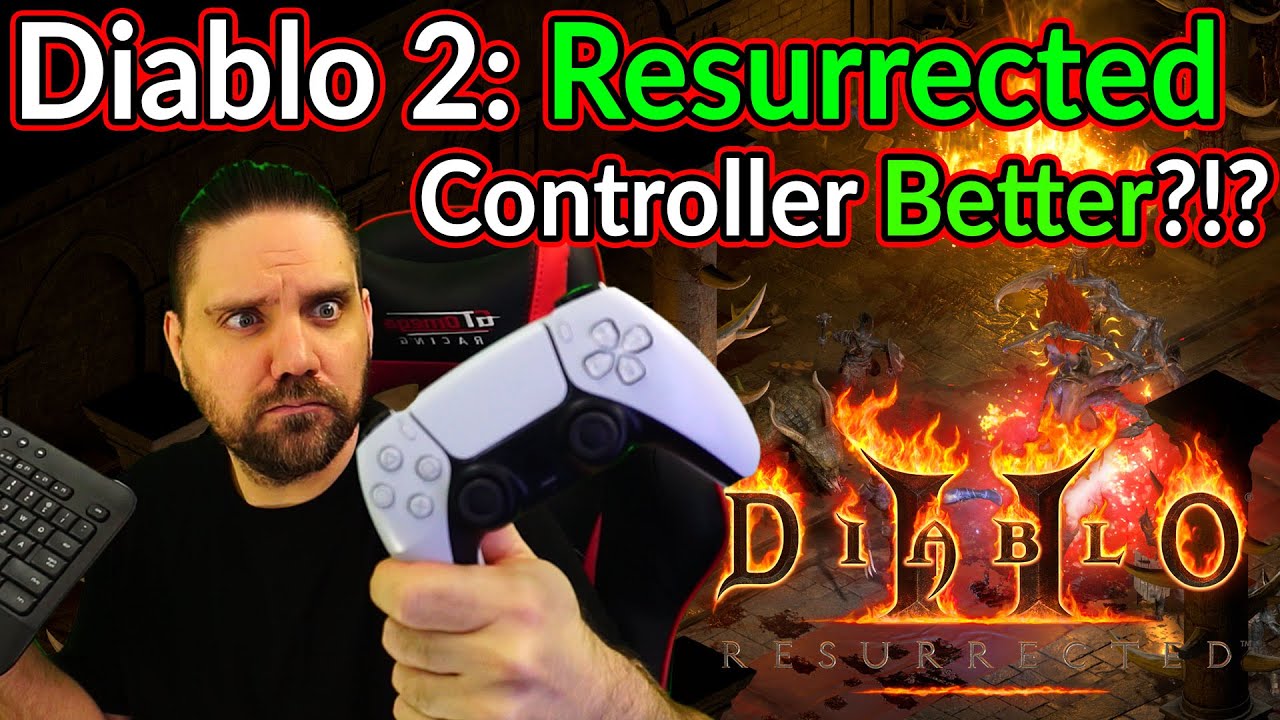 Don’t need to. I saw the game mechanics between the two. Teleport being the #1 reason to use mkb otherwise, youre gonna die by getting telestomped. Controller has set value of distance. Early ladder start people with controller are gonna have a bad time navigating on hell mode.

They are saying it is better support because of things like auto potions to your belt, which makes sense. Smart targeting like it is on d3. Controller isnt bad, but mkb will be go to for majority of seasoned players. It depends what they play as well.

I disagree, the majority of seasoned players on PC will prefer the controller if they own one.

Having been a D2 players year ago and playing the Alpha I’ll be doing controller. It doesn’t solve every issue and not perfect and has some cons like you mention but has far more pros.

But hey as long as the game is good and has online saves for ladders on console I’m happy!

I disagree. I follow a lot of streamers and they all will be playing with MKB as they know the issues with controller for certain classes. They say controller feels good, but they are using mkb for my previous stated reasons.

Long story short, it won’t have the precision mkb have.

No judgment here but in my personal Opinion I feel many PC commenters are just saying they will use a controller, as a veteran player from the original D2 and someone who can’t stand PC for anything else, I have to disagree, I would gladly use a KB+M over a controller on my console. I’ve watched probably every streamer possible and most have not even mentioned controller one guy did a comparison between the two. And while yes it’s playable but it’s a step back. Especially as a caster like the Sorc. I prefer the feel of a controller over KB+M but I did not like the controller option. There’s more cons then pros with a controller. And while KB+M would have a huge advantage on console in PvP it’s not everyone’s cup of tea. As a Console user I have to keep funds aside when a brand new controller breaks 2 months later by normal play. A KB+M costs less then half the price of a new Controller. So it’s not hard to grab the gear for KB+M play on Console. Also on Controller the Inventory use is god awful and is super slow to do anything. PC has always gotten the goodies over Console. It’s time we get the same. The controller support is a neat idea for PC though don’t get me wrong but it means support can be added to console just as easily quite a few games on Console can be used with KB+M as well. So it doesn’t make sense not to include it especially if the Dev’s really want to keep the game as close to original as possible like they claim. D2 was the one exception that never saw Consoles like D1 and D3 so having KB+M for D2R will keep that original feel and allow new players to see how it was played back in our days. With many streamers I watched many chose KB+M over Controller some compared but went back to KB+M and stayed. The handling of a Controller felt better then mashing buttons on a KB+M were mentioned in a couple. I just don’t believe PC players will use Controller like you expect, Just doesn’t look like a popular choice to many PC Streamers. I apologize for such a long comment.

It depends who you play as. it is easier to aim with keyboard and mouse but more fun to use a controller for brawlers/hack and slash characters.

I think people will turn to controller despite a lack of accuracy with targeting given the vast difference the movement axis makes.

Most builds will be good with controller. I mainly see issues in nm and hell mode with teleporting sorcs or teleport charges on staff, getting instantly stomped by aura champs, beetles, stygian dolls. Once someone is accustomed to how it works, they might be ok, but playing the game and knowing the ai mechanics that is the reason for my conclusion. Its not like controller will be bad by any means just not as precise. Most builds/characters wont have this issue, though. Controller will probably be easier on the hands too. I plan on using controller for certain builds.

I can see a multi-button trackball mouse being useful, potentially as good or better than a controller. I’d have to get reacquainted with it, though.

even with a trackball, you’d still only have the 8-axis movement compared to the controller with 360 movement.

Possibly and likely, but it would potentially be easier on the hand (and an accessibility option). Never tried it, myself, but I like to think about what I may eventually need to do to keep enjoying the game.

When your in a bnet game fighting over loot m&k is going to win every time.

It’s not with D2:R, that is the point…its very unique in that controller support adds more functionality than K+B…if you played the Alpha you would see that.

This is not about K+B v Controller…K+B wins in nearly all games BUT for D2:R the 360 movement adds so much over the 8 way axis movement of K+B that IMO a lot will prefer Controller even on PC.

Epoch for now has spotty Controller Support so I use M&K…I’m a bit rusty at it and taking some getting use to. I don’t have some $100 Game mouse and KB but the Remapping and custom option vs Controller is huge…BUT…

With Controller that I’ve used for the longest, everything is within a 6" Radius in palm of my hands instead of 2ft area with M&K…I have (4) triggers, (4) Buttons, (4) Ways on D-Pad plus (2) Down on thumbsticks…

…whereas with M&K…you can have 7-10 Buttons on Mouse alone and almost endless KB Remapping to fit your taste and feel…I think it’s up to Individual and game Type itself. I know some who use both depending on what Game they’re playing. With the Diablo Style Games, for me Controller is just better at the moment…

IMHO it’s about the only pro if you can call it that. The reason it’s not feasible to not add KB+M support on Console is one word “Inventory” slow and a lot of actions take 2 seconds like Clicking an ID or TP scroll or even selling. Also the limited range with Teleport it’s asking for a disaster more then 90% of the videos and streamers I watched STILL preferred KB+M some did a comparison but the only compliment was it’s playable if you can call that a compliment. Also when in Inventory it uses the entire screen vs KB+M with half screen you can do things in background on KB+M also if you play HC and your close to dying there is mo pause in-game and one streamer even showed the multiple actions needed just to go to exit game = Dead HV character. Yes the Controller use is a “rough” trial but it will need some Serious improvements to be worth the aggravation. Many commented that the controller has a nicer more comfortable feel as well but not much else. From what I saw there’s no auto target either whatever monster is highlighted is what you get. You also have to turn and aim at the mob causing slight movements forward giving less time for spells and a preemptive strike with KB+M you can hold your char in place turn in that direction without moving and then attack. Can’t remember the buttons to do this haven’t played in over 10 years. I’m also a console player and I really don’t like Pc except for D2 and I would still choose KB+M over controller. Just my opinion. I feel if you actually used a controller you would easily see the cons and how it’s a huge step back. No judgement of course if you do prefer controller.

I’m a D2 PC player but I really liked the controller in D2:R when I played the Alpha…again I would not be hasty to form opinions on D2:R Controller until you actually play it because it is not like standard Controller support in PC games.

I would still expect the MrLlamaSC of the worlds to use K+B on D2:R because they are the elite D2 players but a lot of casuals may switch to controller on PC for D2:R in my opinion.