I’ve outlined these build(s) to help Crusaders understand LoN Bombardment is still relevant. While, A6I2 Bombardment has taken the spotlight with it’s groundbreaking PTR debut, there is a small niche for LoN Bomb, mainly in 4-man, or if you just prefer not to use the horse. 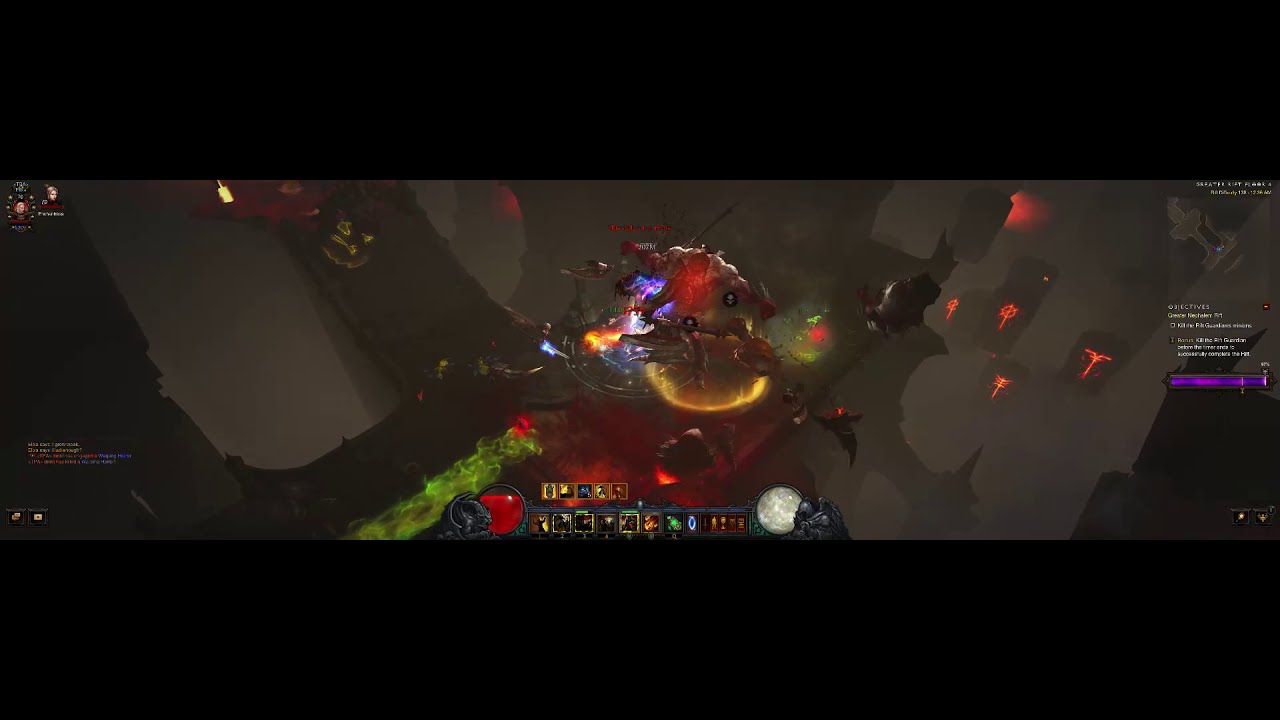 The big sister build A6I2 Bombardment gets to do the following with zMonk:

LOD OPTION
LoD has other configurations, it’s solid for lower paragon players with Stone of Jordan and Justice Lantern. Those with the old Stone of Jordan can go double SoJ for more elite firepower.

RGK OPTION
There’s another very interesting variant for groups where you are the trash clearer and RGK:

Hard to test in solo, you will likely die, but this setup will yield ~4APS+ on boss.

Thanks for the write-up! Very encouraging to know that there’s more than one way to play bombardment.

Have you tested both I2A6 and LoN/LoD enough to speculate on the tier difference? I have a primal heart of iron with thorns that I’ve been itching to use.

Also, any case for doombringer?

Thanks for the infos. I might give LoN a go at some point. The post invoker nerf was unplayable for me.

Have you tested both I2A6 and LoN/LoD enough to speculate on the tier difference? I have a primal heart of iron with thorns that I’ve been itching to use.

Doombringer was first thing I went to look for, but I ultimately had a better Pig Sticker. You can really crank up the element damage in groups. Did anyone test if SoJ works with thorn damage? If so you could gear Fire too with LoD.

Oh wow, pretty close. Seems like this build has a little less to micromanage, so I’m thinking I’ll give it a go.

I’m pretty sure SoJ would benefit thorns, since it makes your physical bonus equal to your fire bonus on your character sheet. I’m not sure it would effect this build much though. You could give up Stone gauntlets for magefist, but I think you’d probably die fairly quickly. You could give up heart of iron for cindercoat, but the increase probably isn’t very much.

Ty dmkt.
As I really like the Invoker6 playstyle and wish to enjoy it for s22, how far behind A6I2 and LoN Bomb in Grift, do you place it to be, acording to your testing?

I don’t recommend Furnace because of Heavenly Strength damage penalty.

Although Sun Keeper’s 30% elite bonus takes a primary affix, Fervor’s 15% CDR is better than the additional primary affix on Furnace unless you really want the extra strength/vitality on 2h weapon.

Sunkeeper is a good suggestion. Furnace is for groups only, If run solo, the additive buffs to offset Heavenly Strength could be:

Those formulas would have to take the element damage contrast between Hexing and Swamp pants:

In my opinion Sunkeeper is better solo, some of that damage difference can be offset by AC uptime and still running Finery passive solo. Just make sure it has CDR and AD.

I forgot about Lidless being a generic shield, not even sure if it rolls AD.

In season, I6 should catch up a little with mortal drama cubed or furnace. A shame, because it was pacing to clear GR135-140 solo in season, pre I2 nerf. (5k paragon).

I6 w/ Norvald and Mortal Drama Bombardment hits were 600-800T pre-nerf, now they will be 125-140T in season 22 with the extra cube slot. Which should bring the build to around GR133 with 5k paragon. (The same as what it cleared with Pig Sticker and Mortal Drama in cube pre-nerf)

So instead of just nerfing A6I2, they killed Invoker6 completly?

Everyone should play A6I2 next season.
Easy 140 with

On RG fights, belt says every 4s you drop free bombs. Akarat Awakening only needs RG to hit you 6 times and it gives 100% uptime on Reflective skin, buffing all free bombs. Thus Akarat champion’s benefits will outweight Furnace or unity.

Also, the way i spawn oculus in rift is 1/2 holy press reflective skin + stead charge. This will give oculus between start of lightning to 1/2 lightning . Run into oculus, stand there and press all your buffs on 3/4 lightning. With Akarat awakening, you can do this and also gain survivability till physical cycle, especially if you also use unstoppable force (some survivability + faster stricken stacking).

In non season ptr post nerf, i only could press stead charge on 1/2 holy. Pressing reflective skin on 1/2 holy would mean i have no reflective skin buff on Physical. But in S22, you can do that. This is huge damage buff if you use Akarat Awakening.

If RG is Orlash, Hamelin, Stoneslinger, Akarat Awakening will also give you extra manual bombardments, non stop reflective skin uptime, refresh akarat champion for face tanking ability through infinite death procs since they give you very good blocks. These can prove that BIS for 4th cube wont be furnace but Akarat Awakening.

Sigh, as a Wizard I’m pretty damn jealous you guys have basically a better meteor build then the class that actually has a skill called Meteor.

Now you guys go and break a couple of leaderboards.

Ty for the guide dmkt. Have you tried to run it with the fire-rune + critdmg instead of thorns?.

This is to give Reflective skin 100% uptime in rift (gives 50% damage reduction).

I’ve examined Akarat’s Awakening and Iron Skin quite a bit on PTR. Those inbound hits get distributed to all skills on cooldown.

On LoN, I was running 67% CDR and Leorics, which brings cooldown to ~10 seconds, 4 seconds uptime, 6 seconds down. A6I2 with a 2hander and full cooldown rolls is like 65% CDR. (very comparable)

You have to block roughly 24-30 times to get full uptime (depending upon your horse usage and uptime) it’s possible, although rare to pull this off in certain trash heaps, but unlikely you’ll get 100% uptime on the boss.

The best you can do is have it up on 2 cycles to guarantee it’s ready to go for the Physical bomb. Some bosses flounder too much, so I wouldn’t count on Akarat’s Awakening for achieving 2 bombs, maybe better bosses 2 reflect skins every 8 seconds.

One of the builds I tested had Gogok and Lord Commander w/ Provoke, no joke, I had Iron Skin and manual Bombardment going almost 3 of 4 cycles. Clear the trash, move to another kill site and you might run risk missing a manual cast on the physical cycle. It was a net loss though from a progress standpoint.

I am not doubting A6I2 is stronger – it is, and that should hold true even in Season 22. I think with LoN, you’re going to land virtually every single Oculus ring, the density is going to be tighter with condemn, throughout the rift by just walking there. and there is one less button to press in order to reach peak damage.

This makes the build have a lower skill cap. For many the horse will feel clunky – it’s the difference between playing Invoker with and without Norvald. (well maybe that’s a bit little worse).

And to honest, going up from GR138 to 140 is doable on non-season, and wouldn’t be a problem with a few gear refinements, Sunkeeper and Bombardment % on Shield and a few more thorns rolls on secondary.

The build has a lower skill cap, which might help the average player do better in general.

This is a really good tip if you want that oculus ring present for the bulk of physical cycle.

Hey Psikill, YES! I actually did, and man did I make a crazy build too in the process:

Considering Invoker2 w/ Reflective Skin, all non thorns runes are inferior by a factor of ~30x in the most optimal fire builds. Bombardment was hitting for 25-40T, whereas Barrel of Spikes slams stuff for 1Q+

I was more impressed with the visuals of Impactful Bombardment rune that had the enormous 18 yard AoE, those hits reached 70T. And looked super impressive too.

The issue is that Barrel of Spikes base thorns is crazy strong. It seems like the whole thing was balanced against miniscule I2 or low level Boyarsky gem.

Here is the best comparison I came up with:

Call in an assault from afar, raining 5 spheres of burning pitch and stone onto enemies around you, dealing 2850% total weapon damage to enemies within 12 yards of the impact zone.

In place of the burning spheres, barrels of spikes are hurled. Damage of each barrel is increased by 200% of your Thorns.

Each impact has a 100% Critical Hit Chance

Highest Thornsdmg i could get on PTR was around 300k. Would you mind to explain? too dumb atm to come up with that number myself

So after all Non-Thorns Bombardment is still 120ish capable? Neat thats also what i calculated in another thread. So i wasnt that wrong there

Sorry about the Cliffsnotes!

It was GR120 capable with the help of Condemn. I ran this combo on LoN/LoD so I could get all weapons in (Mortal Drama/Blade of Prophecy/Frydehr’s Wrath).

A pure Fire Bombardment build could probably produce a GR118-120.

There were a crap load of circles on the floor.

When you say 1Q. Do you mean 1 Quadtrillion?

When you say 1Q. Do you mean 1 Quadtrillion?

Is there maybe a conversion-error between the german quadtrillion and another one? do you guys in NA have not just those weird yards but also differnent numbers?

But back to topic. Those 1 Q hits, did you reach them after the I2-Nerf?

I admit i didnt play around much on PTR after the nerf with Bombardment. But with a lvl 110 Boyarskis i was just in the area of around 50-60 T and nowhere near of 1Q or 1000T

Here’s a screenshot of me doing a 2.7Qd hit in a battlefield, post nerf : https://i.imgur.com/73z7cFo.png
Granted, this is an area damage proc and I am high paragon but still, goes to show you the damage potential is there.