The new Legendary Affix on the SoJ is nice, but it overall does not give you a damage buff at all. It just makes all other elemental damages equivalent to your highest one.

That means it does not matter if you wear the SoJ or not if you either go just specialize in one element. In fact, it also might be detrimental because you had to give up a much more useful ring like CoE, Unity, Band of Might, Elusive Ring, etc for basically nothing.

So a very, very easy fix to let the SoJ actually make a noticeable difference is by increasing its Single Elemental Damage bonus from 15-20% to at least 30-35% (or more), and maybe even slightly increase the Elite Damage from 30-35% to 35-40%.

See my main PTR thread for all the updated feedback and ideas.

They can’t do that unless they fix the snapshotting bug.

If it goes live as it is, you’ll probably start to see LoD Mammoth Hydras abusing it. LoD Mammoth Hydra normally runs 60-80% fire (bracers, amulet, Swampies, sometimes Cindercoat), with the snapshotting bug you could switch to cold, and pretty easily snapshot 200+% fire (around a 40 enemy pull) with Black Hole: Absolute Zero. In a dream rift, a 250+% snapshot (a 60+ enemy pull) isn’t out of the question.

A LoD Mammoth Hydra build that normally runs 80% fire with Cindercoat and Unity could swap to 80% cold (bracers, amulet, Swampies, lose Cindercoat, gain SoJ) + Aquila’s + SoJ, have equivalent toughness (losing Unity but gaining Aquila), and deal as much as 2x damage. It’d effectively be less than that since you’d be losing out on the Spellsteal buff, but the Spellsteal buff is temporary and you could snapshot in an an SoJ Absolute Zero buff into fire and keep it for a rift floor. Then you just need to fish for a 90-100% progression Festering and get a massive snapshot. And never potion again or die after that.

If it gets buffed to give double elemental bonus, you’d be able to snapshot in a much higher buff. So all of a sudden you’d be talking an 80% bonus vs. a 500% snapshotted bonus, so you’d be leveraging a potential snapshotted 3x damage bonus from SoJ for any non-cold wizard builds.

Potion snapshotting is an obnoxious mechanic though. I’d hate to see that come back again.

I think they have to fix the bug before they can consider buffing the SoJ effect.

but would it really make so much of a difference if Blizzard is already allowing that snapshotting in the first place, even if it doubles the damage output?

Or maybe they can increase the Elite Damage from 30-35% to 45-50% instead if that is an alternative.

with the snapshotting bug you could switch to cold, and pretty easily snapshot 200+% fire (around a 40 enemy pull) with Black Hole: Absolute Zero. In a dream rift, a 250+% snapshot (a 60+ enemy pull) isn’t out of the question.

Who cares? You can’t do that in a Greater Rift, so that tactic wouldn’t affect leaderboard standings, so I say, who cares? Go for it!

I’ve been running the Demon Hunter UE build with the SOJ, which gives me +60% Fire damage, and an automatic +60% to Physical, Cold, and Lightning damage.

My Multishot build is Fire damage, and of course that build has to use Vengeance, and with the Visage of Gunes Cubed, it uses the Seethe rune which is Physical damage. And I use Strafe/Drifting Shadow, which is Lightning damage, in place of Evasive Fire, which is Cold damage for leveling up legendary gems to rank 45.

So the overall effect is that I gain a +60% damage bonus to Vengeance which already enjoys a huge damage bonus from the sixth piece of the Unhallowed Essence set, and that same bonus to all the other elements used in the standard Multishot build and my Strafe variant.

And then there is the +30% damage bonus to elites…

As it turns out, the ring is looking very powerful as it is.

You can’t do that in a Greater Rift, so that tactic wouldn’t affect leaderboard standings, so I say, who cares? Go for it!

Yes you can. Not sure why you think you can’t do potion snapshotting in a GR? 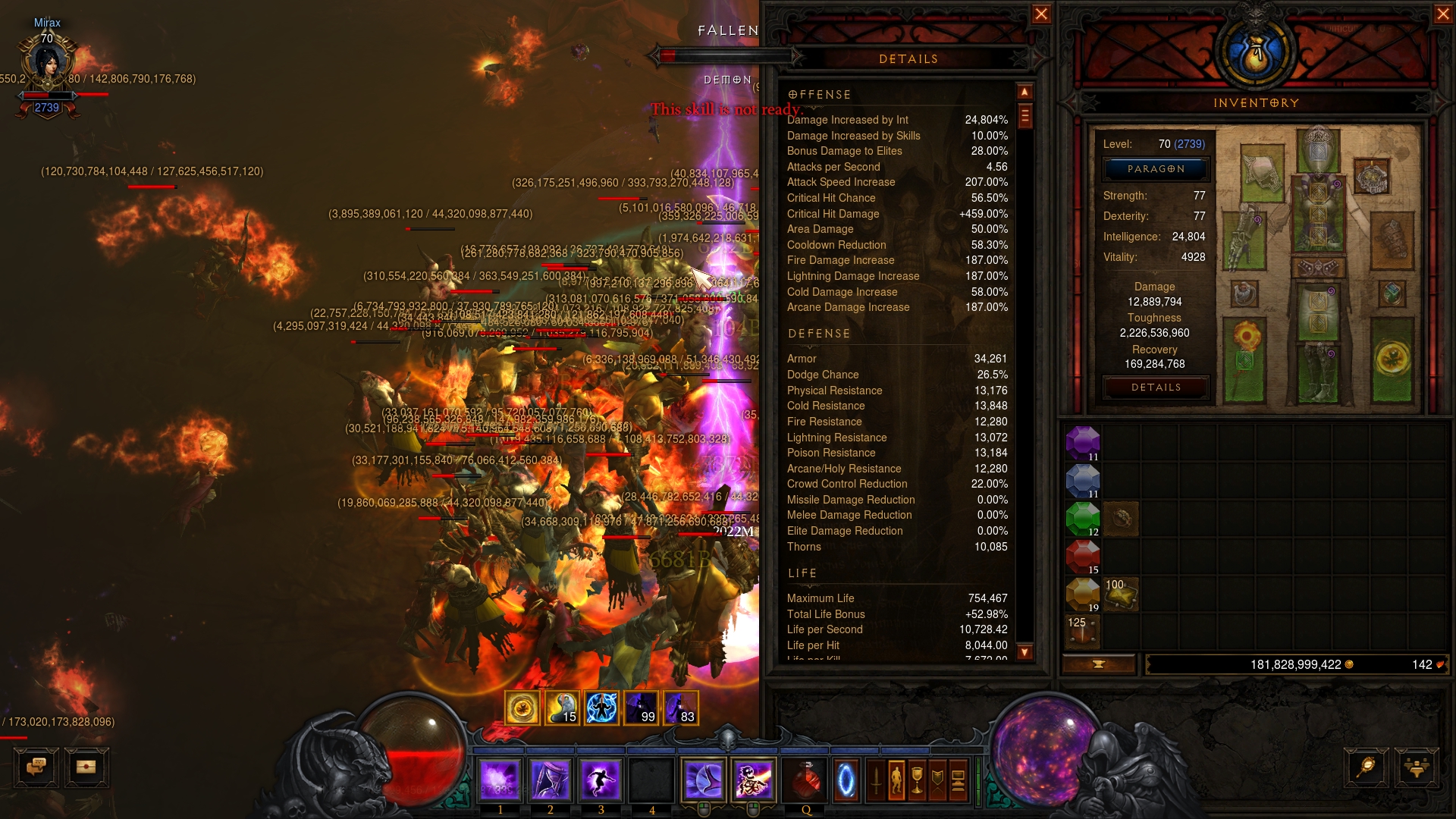 I guess you can’t really tell I’m in a GR there since it’s covered up, but you can see some enemies have 300+T HP, so that should be an indication. Also my gear is faded, which implies GR.

That was just a test, you can get bigger pulls that that if you are actively trying for a huge one to snapshot on a good open map. 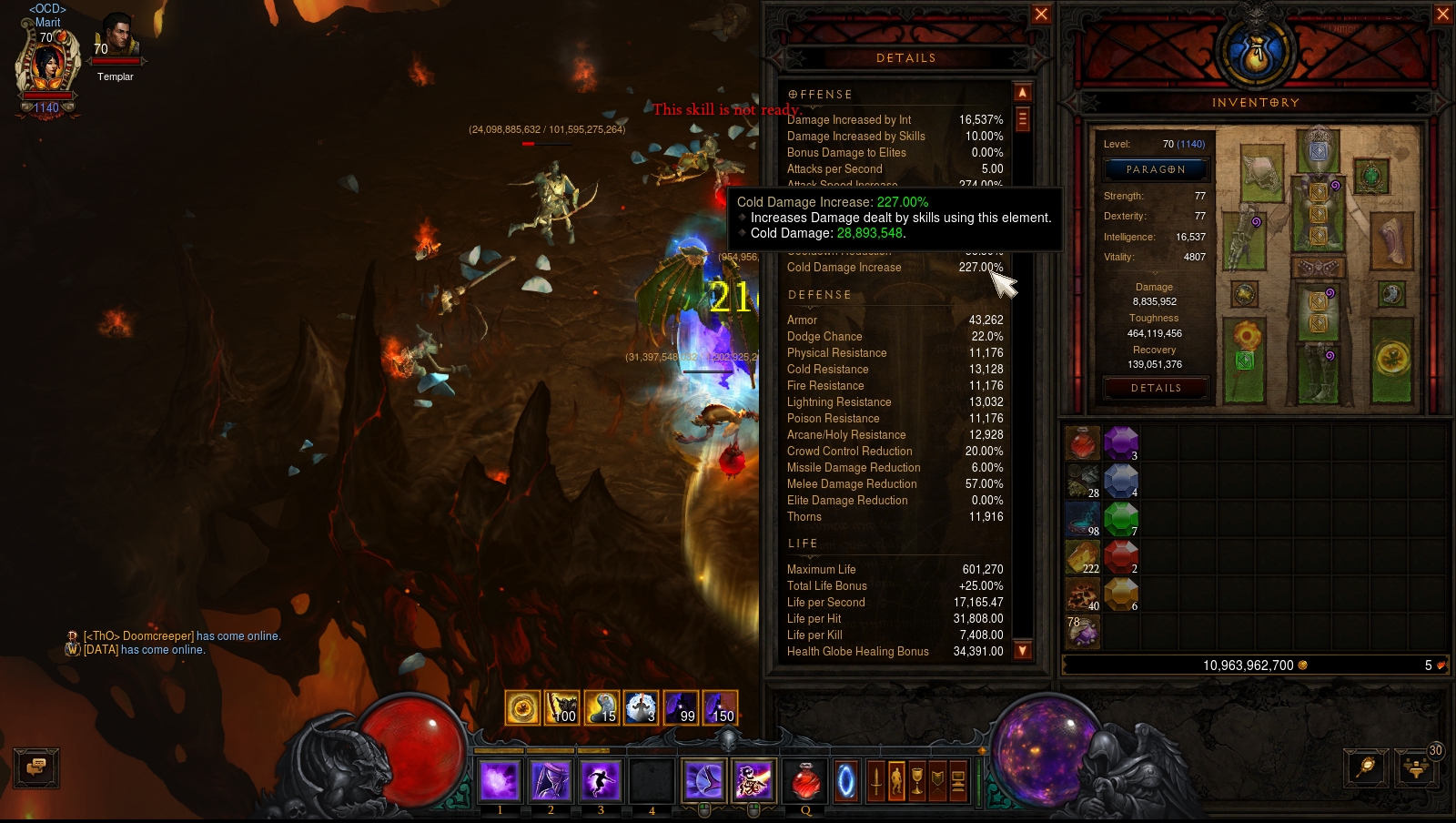 EDIT2: And in case it’s not clear, that first screenshot where I have 187% fire/lightning/arcane, that’s snapshotted in. I keep that for the entire rift floor, assuming I don’t die and don’t potion again. And you can actually get significantly bigger snapshots than that, that was just a testing example.

Compared to Multishot, Vengeance is totally underbuffed in a UE build.
You have Yangs and Dead Mans that buff MS, but not a single legendary that buffs Vengeance, so even if Vengeance gets buffed by 60%, that increase is still neglectable, especially when compared to something like CoE.

I see. I thought you were talking about snapshotting and then swapping out a piece of gear…my bad…

Underbuffed or not, it’s making a significant difference in my clear times.

I see. I thought you were talking about snapshotting and then swapping out a piece of gear…my bad…

Yeah sorry, I probably could have explained it a little better I guess haha!

I made a bug report about it: Stone of Jordan can snapshot temporary elemental bonuses

However, if you potion while the cold buff from Black Hole: Absolute Zero is active, it applies the SoJ effect, and raises your fire/lightning/arcane up to match your temporary cold buff. Your cold damage will drop back down when the Absolute Zero buff falls off, but your fire/lightning/arcane damage will stay elevated. And they will stay that way until you potion again, change floors, or die.

Potion snapshotting is an awful mechanic, and I’m really hoping they fix this.

Underbuffed or not, it’s making a significant difference in my clear times.

And the difference would be even bigger if you had a CoE instead of a SoJ.

^^ I have both equipped.

and CoE will give you a lot more power compared to the SoJ.

I can only sigh.
They finally touched on SoJ; and it falls short (outside the bug that is).

Well, I gotta do a few more, but I just did GR101 with the CoE/SoJ setup, and the standard F&R setup (UE and only the 2 rings changed), and damned if I didn’t do it a full 2 minutes faster with the Focus & Restraint. I’m very disheartened.

By the way, that puts me at rank 33 in the hardcore Seasonal DH PTR leaderboard.

F&R are two seperate 50% multipliers adding up to a almost constant 125% more damage. You only have to cast a generator every 5 seconds, which lowers your dps a bit depending on your attackspeed.

SoJ´s disciplin secondary for example just buffs up your maximum disziplin from 86 to 96 (?) which isnt even 10% more damage in the UE set.

The fire% isnt a multiplikative 20% increase either, since you already have 20 or even 40% on some other parts of your gear and those are additive.

The CoE´s 200% is actually a seperate multiplier (to the other elemental bonusses) but then again, only up 25% of the time, lowering its usefulness overall so much that if you dont spend attention to it, you wont get out of it so much. CoE is way more useful for characters with high burst potential. Less so for a constant stream of multishots.

Its no wonder, F&R clears faster for you

oh and for the snapshotting bug:
Finally a buff to the hydra gameplay. The set is F anyways, so why not buffing the LoD setup