Blizzard, what’s going on with Diablo 3? With the patch? What happened with the PTR values? Are you going to radio silence us again until patch hits and we get surprised with whatever you did in the dark without communicating?

Just because you announced D4 and committed to “quarterly updates” on D4 doesn’t mean you should now go radio silent all the time about other issues. Is this what we can expect moving forward? Silence unless it’s an update about D4, a game that is likely years away?

How many times have you promised “improved communication” yet we end up in situations like the following:

See where this is a problem?

I don’t see any “improved communication” from you at all, beyond some vague promise to update people on the state of Diablo 4 like 4 times a year in 2020… a game many aren’t sure we’ll even buy.

The way you have handled, and continue to handle Diablo 3 is 100% informing my choice on whether to buy the next game or not. What’s the point if D4 ends up being an imbalanced mess with devs who can’t communicate about simple number changes?

Nothing’s changed as far as your actions are concerned. Players are completely in the dark about what is happening with Diablo 3, when, why, or how.

As always, most people in the community are vocal and communicate constantly. But this recurring situation is, as has been the case for years now, like talking to a wall.

Zero communication. Which is why no one in the playerbase can answer those basic questions.

Just want to share my take. Right now, D3 has only Nev as a CM, and before she can post anything, it has to get approved by various corporate tiers. I suspect that they had something planned, got to BlizzCon, the images got leaked, and they backpedaled when they saw the community backlash. Mind you, if they did backpedal, that means they had to re-submit whatever they were publicly going to say through all the various approval outlets, and it all falls on one CM’s shoulder to write it up, manage the approval process, and get it posted. And unless I’m mistaken, “CM” isn’t even Nev’s main job–I believe she was promoted to a different position.

In typical Blizzard fashion, it’s likely they haven’t provided her with the staff and support necessary to do her various jobs, and it’s also likely they’re dragging their feet due to internal debate or the upcoming holiday/BlizzCon decompress.

That said, Blizzard has done a horrible job of communication with regards to this patch, and in particular managing the expectations and outcomes of the PTR. At this point, I’d rather they delay the Season, do another PTR week, and actually communicate with us this time.

the images got leaked 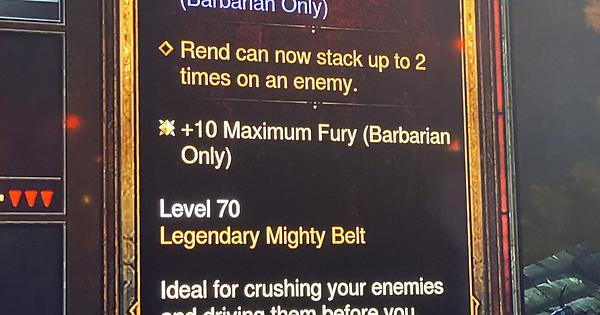 That was originally posted by Fluffy on his Twitter. You’ll notice it’s missing the 200% (3x) multiplier for Rend. In other words, not a “small nerf.”

There are other changes made to Monk and Sader sets at the convention–mainly buffs, but they haven’t been publicly tested outside BlizzCon.

they haven’t been publicly tested outside BlizzCon

do another PTR week

This would be the best decision then.

The funny part about the BlizzCon PTR build controversy is that it’s so simple to assuage player concerns about this stuff.

All it takes is one post clarifying. “Hey an older version of Lamentation made it into the BlizzCon build, it’s actually going live with X%” or “no the Heaven’s Fury and Monk sets are still being tweaked”.

Whatever. But the problem is they don’t say anything at all. So no true exchange of information between the two sides occurs.

Which is why historically, the playerbase is completely in the dark about the game until the day an update actually hits. Then we are stuck with changes (again without communication) for 4 months until they decide to update the game again.

That is the absence of communication.

When they announced quarterly updates, I didn’t know if they were talking to the players or investors…I assumed investors.

Think they should announce the season end date both on the forums and on the launcher as they have done in the past. Most people will probably see the launcher announcement as I think most people may not visit the forums or just miss it here. I know I did until I saw this post.

The funny part about the BlizzCon PTR build controversy is that it’s so simple to assuage player concerns about this stuff.

Yeah. I’m imagining a scenario in which Lamentation was completely nerfed and went live without us ever knowing.

The Barb community is pretty upset right now, but if that had happened, it would be worse than a Mortick’s 2.0. We would have gone nuclear.

Honestly at this point I’m not even speaking as a player of any particular class. If I was a Monk, Crusader, Barb, or Wizard oriented player I’d still like to know just what the hell is going on with the patch.

Like I said, zero communication. Which is why no one in the playerbase can answer those basic questions.

When they release the final patch notes is when this type of information is typically given. I suspect with the controversy about lamentation, there will be an extra/carefully worded developer comment to explain their decision.

I think the Blizzcon (potentially early/revissed patch being ) is a unique situation that has not happened previously.

When they release the final patch notes is when this type of information is typically given.

Thank you for pointing out that this is a recurring problem that happens every PTR / Patch cycle where there’s zero communication, transparency, or clarity towards the playerbase and we only find out what happens to a patch the day it goes live; once it is:

They really messed up. If you’re gonna put D3 stuff at blizzcon , the patch notes should have been up for us as well.
As i stated in a different thread, I don’t think anyone would have minded having a bit longer PTR this time but with better communication.

And no i don’t blame Brandy at all for this, most likely they are understaffed AF.

If you’re gonna put D3 stuff at blizzcon , the patch notes should have been up for us as well.

I put that same argument up in another post twice now, it would of saved a lot of grief if they did and no one seems to want to touch that question for some reason.
Why did they put the PTR on BlizzCon for the streamers without putting the revised Patch Notes with it for all to see? That makes no sense to me other then they wanted to show off or something and it backfired right in Blizzard’s face.

Did they say they were going to improve communication? And was this before or after the firing of staff for more mobile developers?

Did they say they were going to improve communication? And was this before or after the firing of staff for more mobile developers?

Heh, good point. And yes, they did.

Being Clear, Being Communicative

One thing we’ve been asked for is to clarify what our plans are, what (exactly) we’re working on, and where the future will take us. This blog is one of our first steps. More frequent presence and interaction from our community team on our new forums, especially around patches and PTR cycles, is another. We want to be able to talk and interact with members of our community around the world on a regular basis about the thing we love that brings us together: Diablo.

That’s unfortunate then. Because I’m interested in the crusader changes also the barb changes because I was thinking of opening with a whirly bird.

Nev as a CM, and before she can post anything

We understands that but in the mean time she could assure us with a wip progress. My feeling is exactly with arch. That the confidence for this team reaches historic low and seriously jeopardising my motivation in obtaining D4. I am not even remotely interested in participating D4 discussions until those issues are addressed.

I am not directing at Nev but the disappointments are serious.

Where is Zantai? That guy is amazing

Until you realize he is the most bias/ unprofessional CM you will ever see in any game company.