At 4:23 in this video by Wudijo he shows a blue response in the Chinese forum. 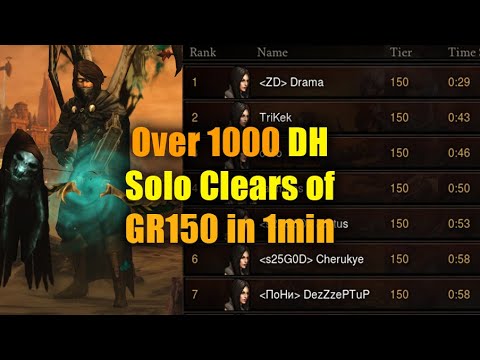 EU servers had a quick reboot…

Just logged into game and looked at the EU Season 25 leaderboards.
The top solo GoD DH clearance is a GR120, and overall solo DH is a GR132 with Marauder.
So, at the very least there’s been a leaderboard reset.

Why should I start over if I played fair? I took a vacation at the start of the season. Now go and tell my employer to give me time off again because there is some kind of bug in the game.

Hot news: At EU ladder was cleaerd from those abusers as in the season as no-season as well.

It’s not impossible to identify all the offenders. There must be logs with each GR clear/run etc. They just need to pick all the players

Thats what we think and logically best way, but the fact is not all players are banned at every exploit historically. With Bone Ringer bug in the past, the top 2 man clear was friend on mine. 1 got banned while the other survived, any one cared to explain why? Both used the SAME bug and will register on the same log as clear is same.

Really that simple? Its not just the solo clear/LB and ranks. Its the paragon farming. You do a legit 150 clear and speed 149 in 30s to 1 min.

all been hiding making sure they don’t register onto the leaderboard.

Exactly this. I could do the same thing as well, its no secret.

Would be nice to get a blue post on the issue

We need this. China never perma ban players, yet they have released blue post on strictest ban in history illustrate how serious this bug is.

Because the exploit is so wide spread

Hot news: At EU ladder was cleaerd from those abusers as in the season as no-season as well

LB has been cleared, so what? Bug isnt fixed. Just gave players more opportunities to hide. There are no known ban yet.

Everyone who exploited the bug should have their account rolled back to the day Season started.

Total farce and a joke if they get to keep their paragon and gems.

LB has been cleared, so what? Bug isnt fixed. Just gave players more opportunities to hide. There are no known ban yet.

A hotfix was applied for patch 2.7.2 to specifically address the issue related to Demon Hunters utilizing an exploit to clear high-level content such as Greater Rift 150’s in an unintended way. In addition to the Demon Hunter update, several leaderboards have also been reset to ensure an even playing field for those playing through competitive seasonal content. The past few days have been busy with many players sharing the issues related to this exploit and your feedback/information has helped …

Good news. I was watching the DH exploit spd farm on discord stream as I type the post.

Hopefully it clears thing up and even out the unfair advantage exploiters have.

If they really can ban every single one who benefitted from this exploit, not only the god dh players, then yes.

Only a Sith deals in absolutes, young Padawan.

So bad they dont even need…
I just played bounty game with 3k paragon guy, i inspected his season profile and he still have 150gr achievement on his profile with 1:50 time, and hes still playing, so no bans. WTF blizzard

Awww, yall just sad that you didnt get extra 5,000 paragon before they fixed the exploit.
Nobody was banned. everything stays. sorry you missed it.

It’s the holiday season. Blizzard employees have lives. Plus, Blizzard as a company is fighting numerous fires related to poor management.

Researching and fixing an exploit on a legacy game, in a season for which we pay nothing, might not be high on anyone’s list atm.

As I do not tend to watch streamers day in and day out I and play casually, I feel rolling back the season would be a disservice to those playing multiple toons or not playing a dh,

As far as banning, if the exploit is not explained how can one know there are using the exploit? Again if like me you do not spend your day watching streamers and you find ways to combine equipment based on the new seasons perks that improve you ability how is that cheating

People using the exploit were extremely obvious. That’s all you need to know. Plus the exploit was available non-seasonal as well.

How are they getting so much progression so quickly? On the second map the group only explored a small section of the map yet have like 40% rift progression.

Even bigger than the exploit for console players though is the modders. Hacking weapons that do millions of damage and armor that make you invulnerable

Does not even matter what gear you want just make it…both SC and HC leaderboards are fill completely with this crap.

This is D3. Cheaters, exploits, leaderboards, all of it doesn’t matter, like who cares? For real.

Just play it for the online single player experience, get the season rewards and be done with it. Next season repeat.