Hello so I need some advice on what follower other FB wiz are running I switched to the Templar for my 136 solo clear because I’m Struggling with sustaining hp.
I feel tanky enough for a 140 but getting health back seems to be a problem I even took life per hit on my helm over vitality.
I know more gons and Augs will make me take less damage and thus easier to sustain.
But even not taking damage i feel so slow to heal when using the scoundrel or temp, but i miss the damage.
Also CDR vs RCR what’s the magic ratio going to be
Just looking for some tips one what other FBs think is going to be used/ changed to go into 145+ solos

Depends on the intended play style.

Currently there are about 3-4 different variations. Some use squirts, some use endless walk. Some drop karini, some drop CoE.

If sustain is an issue, then hopefully you arent trying the squirts setup.

Let me know what you are wanting to do. I can run you through the required stats and playstyle for most of the variations.

Mirror Images Firebirds got a nerf on PC but not Console mis season lol. 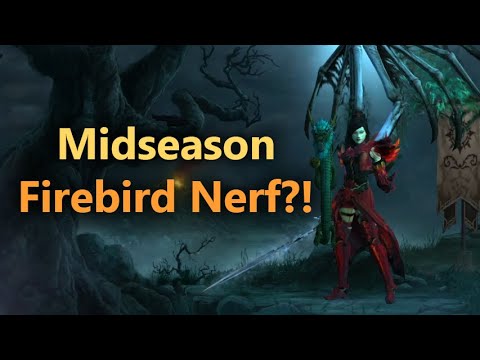 well that’s a cop out since mirror images are meant to well, mirror your character…

It’s not coming across too well, this or the pre-season outline imho. Have enjoyed a number of the contributions different streamers have made at different times, but no so much at the moment. There seems to be people enjoying the update.

Good to know, cos i hate twisters, lol

Not any of the top players on PS4 use Mirror Images…in both HC or SC.

How come? It’s the strongest firebird build with twisters.

LB’s ? I don’t care what other Player use. I just abuse the buggy Twister playstyle. Leaderboards are a joke as long save Wizard exists.

Please explain what exactly is buggy about twisters…

Lol Blizzard reversed the nerf on PC due to nerfing power mid season.

Please explain what exactly is buggy about twisters…

I know this works for years on console, even Maxroll has changed FB Build to work different on console.

Still can’t get my MI’s surviving in GR130 with Enforcer gem. So twister is the way to go on PS4. Good to know you found out a way to get your MI’s survive in higher GR’s without using Enforcer. Something must be different on XBox

So, let me see if I’m following you correctly. You are essentially saying twisters on console are “buggy” because they do not perform or act like twisters on PC.

Thats a big can of worms…

There are numerous things on console that do not work like the PC variation, not just twisters.

To list a few:
Teleport, dashing strike, blood rush, furious charge, and leap are all mobility skills. On PC those skills can be cast at a specific location. On console, you are forced to always cov er the maximum distance unless you face a wall.

I could keep going…

That being said, are twisters mechanics on console allowing players to play the FB wizzard in a way the Devs did not anticipate? Probably, as the Devs tend to completely ignore/ forget about consoles in general.

Side note: PC players can still use twisters as a better damage source in speed content, just like console players. The twisters still pixel stack mobs, and still proc FB 6pc damage every .5 seconds. They just can’t stack the twisters on walls or corners. In speed content, we dont stack twisters. In pushes, stacking twisters is only benificial vs elites/ champions that are already against the wall. We still have to kill trash for nephalem glory, and twister stacking is very inefficient at that.

If I buy a motor cylce that is capable of going 200 mph straigh from the manufacturer, but you bough that same motorcycle in a state that requires a govenor be installed that limits the speed of your bike to 100 mph; is my bike “buggy” because it can go 200 mph stock? Nope, your bike just got nerfed is all.

I get Omplich’s and Exis’ angles on this. The choice of words used to describe twisters mechanics matters less from my view… what’s acknowledged, and explained well, is it’s different on respective platforms. The rabbit hole goes far with things that are behind it and things that are different.

Incorrect. Twisters are bugged and do no function as intended. They are an exploit since it does work the same way as they do on pc. Anyone who uses them while channeling is abusing this exploit. You could also say people cannot share loot while at the same time can they can roll gear at the cube. You either are ok with everything or nothing. You cannot pick and choose what you believe to be “legit” or acceptable.

We can in fact choose what is legit. If the basis of the legitamacy is founded on core beliefs.

Needless to say, stating a console game mechanic is buggy or not intended because it doesnt perform the same as PC is trying to compare apples to oranges. It is Diablo 3 on both platforms, but it is a different game between the two. Each variation coded differently, resulting in variations, not bugs. If the Devs want to come out and say console twister mechanics are bugs or not working as intended, so be it. Until then we can take their 8 years of not as implied consent to the use of said mechanics.

When the developers do not provide us with their input on the matter, then yes we, as the players, choose to decide what is or is not a bug or unintended exploit. Again, 8 years of untouched twister mechanics points towards acceptable game mechanics.

Based on your definition of bugged/ exploit, any mechanic on console that does not work as it does on PC is a bug or unintended exploit. Uhoh console players, don’t pick up nephalem glory! If you pick it up you are exploiting an unintended mechanic that doubles your damage! PC players don’t get that, so it must be a bug!

So, let me see if I’m following you correctly. You are essentially saying twisters on console are “buggy” because they do not perform or act like twisters on PC.

I think you got my point, but you defeating your point of view. No problem. I’m playing Diablo since release of D1, so don’t tell us, what is intended or not.

You compare mobility skills with damage skills. We have no mouse to target, so how should we adjust distance for dash or teleport.

NG was discussed several times, no time to reanimate this topic.

You say twisters are ok, fine. I think not. If Blizzard is aware, pretty sure. But they have more important things to fix/develop/improve than a “old” game like D3.

Yup, they won’t come back to fix and correct the issues with it since it won’t hit their bottom line. Assuming channeling while casting is an intended mechanic is naive because of how completely overpowered it is. Blizzard is about balancing builds or at least trying to for pc playerbase. They haven’t touched twisters or addressed it on console but rather buffed it in the most recent patches. Again, pc is the player base they cater to, not console. People who imply it was intended can look at pc and wonder why it isn’t there. It would be all over the leaderboards and it would be nerfed, patched, etc. This is why channeling while casting twisters is not an intended mechanic. Saying they are separate games is true, but not to the point a skill and build completely outshines everything else.

Bug is a pretty ill defined word. Depending on the issue a bug in one person’s eyes can be described differently in another person’s eyes. It’s not so much a right or wrong thing to me, just different perspectives on the same truth.

I don’t see a lot of point in escalating it myself. There’s some points made that are speculative, and others that are known.

What’s clear is it’s different, as are many other things.

If they change some things, like say NG… then perhaps they would feel they have more license to take things away that console, shall we say, enjoys using.

I think it not unreasonable to consider devs may have faced some challenges making one game on two different platforms behave exactly the same.

I would be more inclined to call these design compromises with the end goal being a ported game which is understood to be different in places. As approximately the same as they were practically able to make it.

Is the point to advocate that they change it? Heating up debate on it may just bring it into their priorities.

Are the console twister mechanics OVERLY strong, yes. Nothing new though, twister have always been overly strong on console. So whats the actual issue here? Tired of playing wiz? Think you are forced to play wiz because of how strong it is? You aren’t forced to do anything, you can choose to play something else. If you say “I have to play wiz to compete or get into 4 man meta”, then understand that is still ultimately your choice. Meta will always be meta reguardless of the builds involved. You will feel forced to play the cookie cutter meta build no matter what it is, or how strong it is.

If we are in fact going to scrutinize twister mechanics, why don’t we also confront the other elephant in the room: wizards have an ungodly amount of defenses, making them the tankiest characters in the game. FB wiz can rock three forms of 80% damage mitigation, while having 25% from teleport, 25% from mantles, while having rediculously high refresh rate of absorbtion bubbles. All in all, just the damage mitigators provide 99.55% damage mitigation. Lets compare that to any other dps build in the game. Monk can run four forms of 50% damage mitigation with PoJ, which equates to 93.75% damage mitigation. The 99.55% from a wiz equates out to if the monk had the 93.75% and added in another single source of damage mitigation of 92.8%. That is just ridiculous. FB wiz can easily achieve 20 billion defense. Good luck getting any higher that 2.5 billion defense on the PoJ monk. Thats almost 10 times the defense! Lets talk about this disparity while were at it. Its sad when the strongest dps character also has more defense potential that support tank characters…