15 complete runs later, still do not have sage set.
I have the other 3 sets and cosmic wings now, but still no sage set.

Not only have the plans NOT dropped for me, I still see (and can craft) the old Recipe on my characters…

15 complete runs later, still do not have sage set.

Are you referring to the Sage’s Journey Set?

You should already have the new Sage’s Journey Set since your Blacksmith is Level 12 on both Normal and Hardcore. 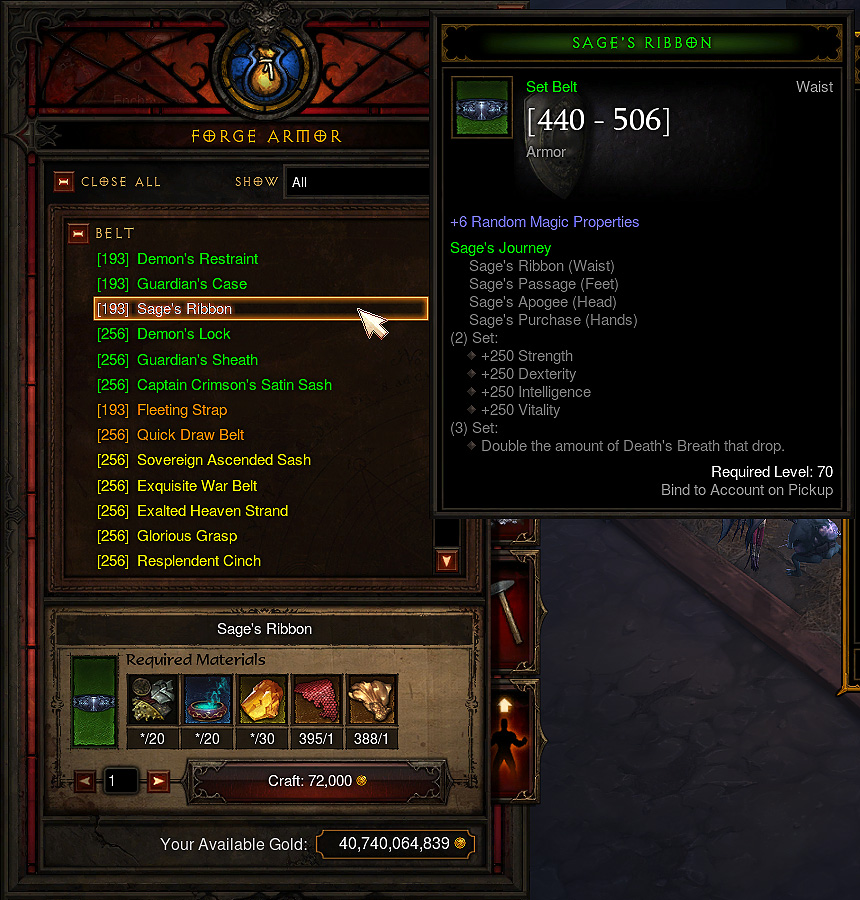 I don’t have the belt.
Got the set now, it dropped in season.

I reckon its a glitch both my mates got Captains off the goblin I killed except me.

Seems that some of us are being unnecessarily tortured over the new plans. If it is being controlled by RNG then that is just bad form on Blizz’s part. Several of us are never shown favor by the RNG gods and thus puts us at a disadvantage.

Just chiming in - No Crimson’s here. Did several sets of bounties yesterday, and no plans dropped at all.

I want this so bad, but I’ll just grind. Eventually - lots of time.

I got the lvl30 Crimson right away and can’t find the real one in season.
Looks like the game thinks “already have it”.
Never had this issue with plans in season, they drop like candy from caches until you have all of them. Except for the new ones.

Maybe, yeah. I’ve got the crappy low level one as well.

I got Captain Crimson in my first ever bounty reward box this season.

Ugh, also finding it really hard to get this plan for my seasonal sader. Have done quite a bit of bounties and in general plans have stopped dropping but still cappy’s eludes me. Frustrating to say the least.

Off season it took about 5 bounty runs before an Odious Collector goblin dropped the plans for me when the new patch deployed. In season 18, it took almost 10 bounty runs before I found the plans in a cache. I too received the Augild’s and Cain’s plans before Crimson’s. I was beginning to wonder too, but got them before long.

Same here. No more plans are dropping from the odious collector and several bounty runs ranging from T10 - T16 have also failed to drop these new plans. I even leveled up another toon and tried to open up a set of bounty caches on it and still nothing. I did enjoy using that on the PTR but can’t seem to get them.

Same except i have lost count of how many bounties and collectors i have done. this is egregious levels of disrespect it should no be possible for me not to have the plan by now and yet it’s all working as intended.