In testing on my bear sorc, no amount of IAS appears to have an impact on normal attack speed. I was under the impression that the IAS cap was being raised to help offset the massive nerf. I honestly think that my unchanged attack speed is slightly faster than bear, which can’t be right. So, here’s a bug report. Thank you!

I can’t believe they didn’t fix it properly after the metric ton of feedback they got last time.

Link to the original topic

Hello, I just test it the Druid in Bear form and seems no matter how much IAS you have the speed is the same which is extremely bad. Am I sharing only these thoughts or ?

Also a video showing the problem. 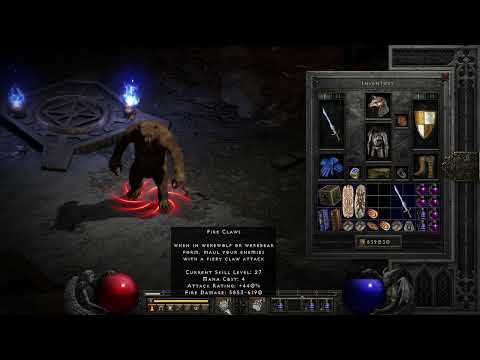 Seems like its using the 75% ias cap that was originally introduced in the first ptr and not applying the 150% as they wrote in the patch notes. The speed is pretty much the same

Awsome. Now we just need to keep this topic on top.

Edit:
Just saw Dbrunski’s twitch stream with testing some different weapons. It’s so slow.
Then you compare it to the fury WW hitting with Reaper’s Toll or Earthshifter and we are so far behind in terms of clear speed and mobility.
Even with the WW using weapons with next to 0 wias vs WB w/ Tomb Reaver and 90 wias.
The WWs strength being able to use these slower weapons and actually swinging them quite fast. The WB should be fast with a fast weapon.

I fanaly tested it. I reached 160% IAS somehow, but the only noticeable change in AS was when used Maul. Maybe the game not calculating something in when stacking IAS from items?

Thanks for doing that. Seems like they’re putting too much emphasis on Maul. Which is a huge bummer for anyone trying to do a bear sorc or barb. If they want to have the bear swing slow, it needs to do splash damage on normal attacks. Otherwise the clear speeds and combat feel is going to result in no one playing it.

That, and Fire Claw Bear is now an even more skill point expensive build. So you can’t use Armageddon as an aoe, but you could whit WW Fire Claw, but again we want to go Bear.

Pity there are so few WB players already so we’re getting minimal attention.
And WW is doing better than fine from what I’ve seen.
Shame that the WB has always been a poor option for a melee character and the thought of it getting buffed in this patch really had me hyped up.
Then came the first PTR and all shifters made their voices heard! We got unnerfed for a moment.
The second PTR followed and showed that they actually hadn’t listened to us and were still determined to change our attack speed.

In my opinion the base class shouldn’t matter - all WBs should have the same base frames and be able to push high fpa with fast weapons and ias on other gear. Give us back the potential! Remove nerfs.

Agreed! My bear sorc is easily my favorite character and I don’t think I’m alone. It took forever to assemble the gear and it would be super sad if she is dead.

Can’t wait for updates if the matter is adresed at all, or whas this intentional or truely a bug of a sort, or what’s up.

Silence is deafening. It wouldn’t be so frustrating if there were options. For example, I wouldn’t mind changing up my gear if I had to. However, that’s not an option for bear sorcs. Even if they were to add Maul to the Beast runeword, I could work with that.

If they desperately want WB to hit slower they should really be looking into adding some kind of cleave-effect to normal, Maul and FC attacks in WB form.

So the gear that you have IAS in the video is 20 from glove, 20 from hightlord and then the weapon, which is a 39IAS grief PB and a 100IAS PB?

so to calculate the EIAS we use the following formula

as for 5 shael PB

under the new EIAS chart
with Grief PB it is at 9fps, and 5 shael PB is at 8fps…

and I have been listening to your video numerous time, it does seems like the attack with 5 shael PB is slightly faster than Grief PB…if my observation is correct then this is not bugged but as intended unfortunately

Or they are trying to make Maul as a mandatory skill to use in order to bump up the SIAS and compensate the lack of SIAS from werewolf.

under the new calcualtion, max speed for bear will be between 6 - 9 fps depending on weapon of choice.

Well they said you will have a choice to play with whatever you want and will be balanced.
That’s not true and it’s obvious. Maul it’s a good skill but one skill doesn’t make a hole build.
You have to choice which one it’s best fit to you, not forcing you to plat with one.
Shame!

either way, it shouldn’t be classified as bug since it isn’t bugged.

I do not like the idea of making maul a mandatory skill, and to be fair, blizzard never force people to use maul instead of any other skills, it is just what people would do just to make their attack faster anyways…even before 2.4, there’s plenty of people that would pump up maul into max charge before using flameclaw in order to maximized dps as well (and to make up for the lost of dps from 6 shael PB I assume)

On the other hand, faith bow or beast rw could potentially be best weapon of choice for flameclaw starting 2.4 if they are not chaning the formula. SIAS from fana can fill up the SIAS gap, and it is way better than going a 200 IAS weapon