Just keep making your voice heard! Your requests are just as valid as any other and deserving of consideration! Not to mention I’d like them too >_> 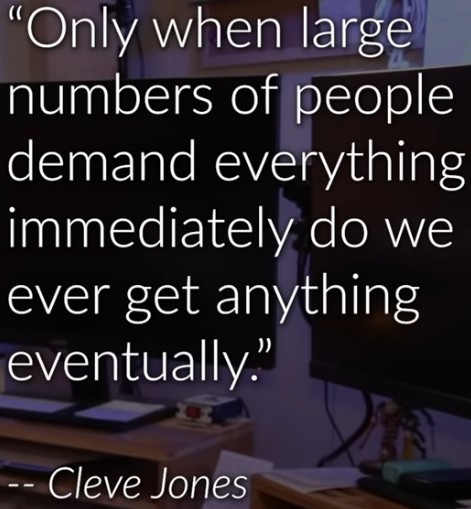 “Why are you booing me?”.gif

It would be nice to actually have factions, allegiances, story, and diversity of the game world in this MMORPG.

But that’s a pipe dream. An MMORPG was made in 2004. Since then it’s been seasonal content for fanfic writers and eSports followers - FOMO sales.

Removing covenant lock isn’t enough; faction lock needs removed too. Letting high elf looks on the alliance won’t change the faction imbalance and the fact that Arcane Torrent has more use than the VE warp. And that goes to the idea of abilities customizing your character…

Talents are customization options – but no effort seems to be made at making build diversity any better. They instead are treated as an abandoned system, while SL systems (to be immediately abandoned at 10.0) get any/all dev focus during these “systems patches”. What a waste of resources. It’s basically paying to play a live beta.

The patch philosophy is flawed.

True here too! And it is coherent/makes sense given free will. My vote is one of the missing blood princes. I hope blizzard realizes there’s a sizeable amount of people disappointed with the BfA outcome for San’layn and realizes we want actual lore, not throwaway mooks.

they were able to add 5 natural hair color options for Void Elves to the 9.1.5 update.

Thank you Linxy! Void elves getting natural hair colors is amazing, but why 3 shades of blonde and 0 brown? Please give them brown hair too, people have been waiting for this for years. Just add brown and make a lot of people happy.

Maybe add a quest where the Silver Covenant move back into Stormwind and void elf can chamge name to race high elf. As well as new racials non void. As well as co lead void elves which brings more normal hair color and styles.

Hey Linxy! I know it’s out of topic but I wanted to contact you in some form.

Are you able to pass on the situation of Dragonblight-Fenris needing more realm connections?

I posted a thread over there at the server forums, but the WoW team can check the metrics and transfers over the last expansions, and many many many guilds transferred away, and now the server is barren, with even crafted items having a very hard time selling in the Auction House.

So if you pass on this information to the teams responsible for dealing with this problem I’ll be very happy.

Thanks and have a great day!

Currently Dragonblight and Fenris have the lowest amount of raiding and active M+ characters, at least according to online metrics that scrape the WoW Armory, such as RaiderIO Honestly, it’s been being a pain to even sell crafted items in the Auction House. Can we please get a realm connection to some other realms?

This thread is for people to ask what they want. It’s up to the devs to decide what the fans want into the game. Stop ruining it for others.

I would like to have more void elf hairstyles that isn’t a bit squiggly hairstyle and hair colors that is black or white or brown.

And paladin void elf would be nice.

why not better sanlayn in the alliance as void elf customization? so many alliance players seem to want playable sanlayn that it would almost be better for them to be in the alliance

I would emphasize the developers to give this proper care. It also serves as working on a possible Saberon race for the Horde.

And one remark from me, Albien, please don’t forget to # the claw slashing animation for melee characters which Greymane uses. This is also part of the wolf/worgen fantasy.

This thread is for people to ask what they want.

And this thread exists in a forum where fellow players can criticize others and their ideas.

This isn’t just - a player posts, and blizzard decides -

players can criticize others and their ideas.

I get it. You want to wave your flag saying you are negative Nancy. But the more you behave like this, the devs will listen to the folks who want what they want, and grant them.

Look at void elf natural hair colors. You were so against it, and they made it even better by giving tentacle toggle off.

Look at void elf natural hair colors. You were so against it, and they made it even better by giving tentacle toggle off.

do you understand how many resources it takes to add a new playable race? To animate it? To voice it? To pair it up with gear and mounts? To determine the scaling up and scaling down of all that gear based on gear-slot position?

I get it. You want to wave your flag saying you are negative Nancy

oh wahhh, he doesn’t like the idea because its simply not a priority relative to the resources it would take to create it as the game is on fire for other reasons. He must be negative and childish~

There is nothing critical thinking when you just spammed Fallyn’s quote saying “nope” “no” “nah” . Even a 2 year old kid knows how to say “no”.

You aren’t saying anything productive or constructive. You are just here to tell people what you don’t like by spamming with the word “no”

Also a Fix on the Heritage Armor in terms of Color Variations. Like Silver Color on the Plate, and Brown Trench Coats.

There is nothing critical thinking when you just spammed Fallyn’s quote saying “nope” “no” “nah” . Even a 2 year old kid knows how to say “no”

“im rubber and you’re glue, s-s-so what about youuuuuuuuuu reeee”

Im telling her, “no” as a summarized version of what i just explained to you when it comes to resources required for a new playable race. Not that you care, but she’s already been educated on this subject and doesn’t care; she still asks for this stuff. Thus, her utter ignorance gets matched with a simple “no”.

Can vanilla Tauren finally get more than 4 face choices after ~17 years? New faces can be copied for Highmountain, too

So in other words, you are just whining

So in other words, you are just whining

thanks for coming out champ~