You’re mistaken if you think Nightborne players “got all they wanted.” The customization the developers added clearly show that they disregarded any of the feedback that was given over the years.

Your race looks better than the core race, what more do you want?

You’re mistaken if you think Nightborne players “got all they wanted.” The customization the developers added clearly show that they disregarded any of the feedback that was given over the years.

This isn’t completely true. These new additions can’t be done within a week, they worked on them for much longer. They simply kept it from the player base until now.

This isn’t completely true. These new additions can’t be done within a week, they worked on them for much longer. They simply kept it from the player base until now.

Ok, let’s say that they started work on these additions upwards of 5 months ago in response to the backlash they got from the, “No more customization in Shadowlands” debacle. The fact that they reversed course on their stance only to leave the Nightborne in a marginally better position appearance wise is sad. Had the developers aligned themselves a little closer to the feedback, they would have knocked it out of the park in 9.1.5 and they did not do that.

Your race looks better than the core race, what more do you want?

What I want is for the very clear feedback from Nightborne fans and players to be implemented. Nobody was asking for the developers to double down on elderly appearances when Nightborne already cornered the market on that at launch.

LOL! If you actually believe this, I’ll trade you what Nightborne has and is getting for what Night Elves have because really Night Elves are the winner here.

Once again, thank you for adding these extra colors

There are a few more suggestions I’d like to make regarding the Void aesthetic and tentacle toggles.

I’ll start with the tentacle toggle, and while it looks great on many hairstyles, one issue is that some styles, mainly the ponytail look off without tentacles as there is a bit of a gap at the end. Many players were also hoping to see additional toggles added to some of the hairstyles that didn’t have them. Maybe even tentacles in different areas of the body

A few new hairstyles would also be welcome.

Another suggestion was to alter the appearance of Entropic Embrace, making it lighter and less noticeable or even a toggle to turn it off completely. Conversely, there were also many players hoping to have the Entropic Embrace on all of the time, likely as a skin tone itself and/or a toggle with the option to customize it, with different hair colors, skin variations and even to add stars to it.

Some more unnatural hair colors would be great in the near future.

Many of us also really like the visual colors and effects found on the heritage armor wings, which we lovingly refer to as starcursed, after the racial mount. We would really love the ability to apply starcursed visuals to the end on our hair, similar to Dark Iron Dwarves, eye color and even on our hands and feet, again with different intensities and colors.

I understand as further down my list of things that the stuff I am listing is less likely, and aside from the first paragraph, the rest I listed isn’t likely to happen in this patch as other races require attention too, but this feels like a good time and place to mention these things for the future while we have your ear.

I am someone who values all of the above for the sake of player agency and would definitely utilize all of these RP tools, on a character by character basis.

We also have a dedicated thread with a lot more suggestions here;

In an attempt not to tread on others’ shoes as it were, I’m putting this thread up for those who specifically want to talk about the Void aspect of Void Elves and the customizations they’d like to see with them. I know, high elves and all that, while some of these options in my list below are possibly going to apply to high elf customization, they are still on the list for their application to the void theme of Void Elves. Please note that I do not expect all or even any of these to come to fr…

Again, thank you for communicating between us and the devs and I am grateful for all of the work on the patch thus far and look forward to future customizations

What I want is for the very clear feedback from Nightborne fans and players to be implemented. Nobody was asking for the developers to double down on elderly appearances when Nightborne already cornered the market on that at launch.

Nightborne didn’t even get any new hair color variety really because there’s more whites and blacks as if we didn’t already have enough of those, no different eye colors, pointless jewelry options that most people won’t even use and even more old looking faces, I could go on and on but still I really can’t believe anyone playing a Night Elf would think they are the ones getting screwed over by Blizzard here.

Now, this is legitimately false.

I´m a firm believer ALL the core races still have pending stuff to get done, but let´s not go into surreal territory cause your race at least has the option to make a male that doesn´t look like a constipated grandpa.

Some Void inspiration for the artists to add in the future

omg these are amazing (would like them styles for males too!) and now it made me think of, can you imagine a Dreads hairstyle where some of the dreads are void tentacles! *_*

can you imagine a Dreads hairstyle

I can…and I want it.

MrGM made a video on the new Lightforged Draenei options. 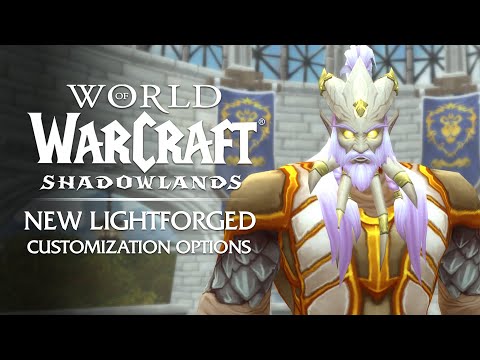 Linxy just wanting to bring to your attention that there are some issues with some of the Void elf hairstyles when the tentacles are toggled off, here are pictures of the issues:

There is no need for big alterations just to add a few hair strands where the tentacles are missing, perhaps creating a toggle to include those hair strands for those who want them, or leave them out for those who are happy with how they are at the moment.

Are Void Elves also going to get any new hair styles, and also, are there going to be more customisations for all those who want to go down the Void Elf fantasy instead of the High Elf Fantasy.

Linxy just wanting to bring to your attention that there are some issues with some of the Void elf hairstyles when the tentacles are toggled off, here are pictures of the issues:

This is the first pass of this PTR. As we don’t yet have black brown or white I’m guessing they just haven’t worked it out yet.

Hopefully also adding tentacles to hairstyles that don’t have em…

Remember to submit a bug report on PTR as well though.

So out of all the forum posts about Nightborne the only thing you guys managed to get out of them was the eyes? Seriously? Sorry but the Nightborne still look crappy. From the geriatric faces to the terrible receding hairlines to the different variations of black and white hairs. Grandma and Grandpa rp here I come.

Indeed I have submitted a bug report on the PTR about the tentacle toggle issues and I’ve also created a thread on the US PTR forum with full details and pictures showing the issues here: Feedback: Void Elf Tentacle Toggle

Edit: JUST realized Ellincia posted the same thing after I typed this out.

In order to provide further feedback, someone made a thread with a few tweaks that might go well with the hairs. I realize the workload right now might be heavy, so take your time. Thank you so very much for listening, haven’t been this invested in a PTR in years and knowing we have a CM that relays information for the developers’ consideration just spurs more investment and a desire to help find any bug fixes, glitches, etc.

Edited: Two of the long hairstyles on female Void elves (2. Consuming & 7. Wicked) look uneven / slightly balding in the areas where Tentacles used to be. Is it possible to replace the missing areas with some hair strands please? Also, the Ponytail hairstyle has a large gap where the tentacle was before. Pictures of the issues: Slight balding on the side https://imgur.com/a/zKD6ETX Uneven length: https://imgur.com/a/o0otQlr Large gap between strands: https://imgur.com/a/zRddmzJ Pictures o…

Thank you so much for looking toward Nightborne.

As excited as I am to see them getting some love, and the successful fulfillment of many people’s wishes, I will admit to being a little disappointed, in a personal sense, if only because the skintone I’ve imagined for my own Nightborne was not among the options.

Please, please, may we have a darker skintone option like this one; one that’s more ashen/obsidian in its coloring? The assets are there, to my understanding (as per this NPC) they’re simply not available for the player model at this time.

Thank you for all the hard work so far, and for all that is to come.

So without the jewelry the Blood Elf women have 2,688,000 combinations.

sorry for the late reply ive been seriously trial of styling so far im at like 29 wins lel , i still dont think it would be because of the jewelry but we can agree to disagree .