The whole Nighthold encounter with Elisande is one of my favorites. It reveals more about her and paints her not as evil as we had thought she would be.

Some highlights for me:

Velen after the attack on the Exodar, mourning his son and deciding enough is enough.

The final scene with Runas the Shamed.

In Dreams back in Vanilla.

The unmasking of Onyxia in Stormwind. Though I think the comic retconned how this went down.

Running into the Lich King during that shaman spirit realm quest thing in the Howling Fjord. One of the pre ICC moments where the LK had some actual menace and a show of strength rather than just siccing an easy to kill mob on you or taunting you and leaving. An easy to miss moment but a great one. Though I suppose the ‘I was once a shaman’ line doesn’t really ring true anymore, there seemed to be some confusion on blizzard’s end back then how much of ARthas vs Ner’zhul was in that helm. 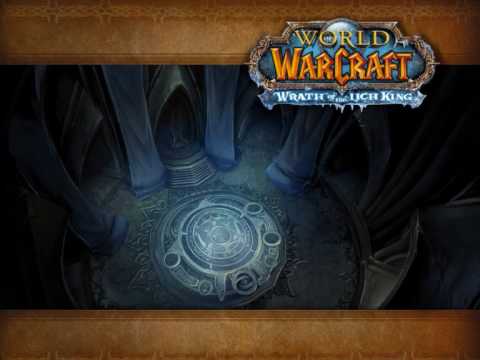 Echoing Runas the Shamed as the most impactful moment I think WoW has ever had for me. Going through the questline, I remember rolling my eyes a lot and expecting what seemed like the inevitable betrayal because that’s just what the game usually does.

Only for your last interaction to be with him as a broken, mentally deteriorating dying man whose last words were thanking you for being his friend and giving his life some meaning again. That was a supreme gut-punch.

I really liked it when Maraad used his life- force shield to save Yrel. “In the light, we are one” is an RP dialogue for my paladin healers . It’s a shame the rest of that expac sucked, and Yrel’s lore later on.

“You took my son’s future. And now, i’ve taken yours.” 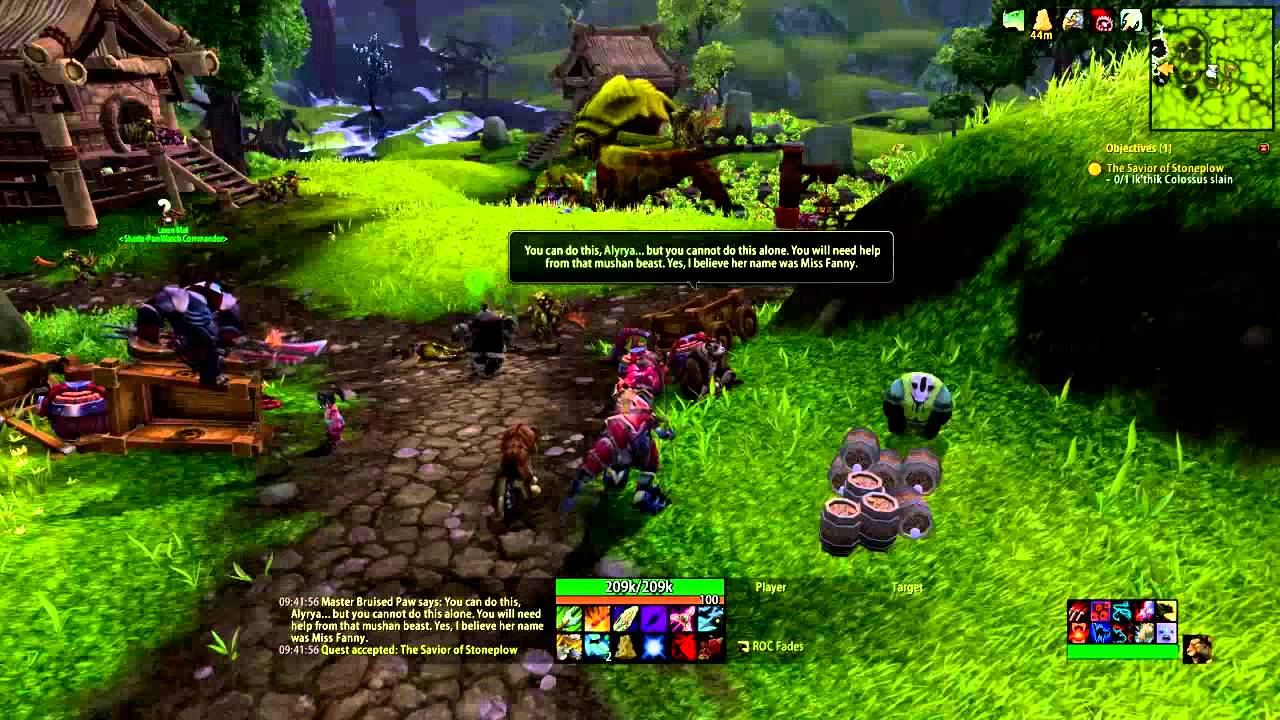 Losing Southshore was really devastating for me as a player–moreso because we saw very little of it in-game other than one day it’s fine and the next…blight forevers!

I also loved the Wrathgate cinematic. Every time I replay that area, I always do those quests and that cinematic always makes me cry…watching as both the Horde and Alliance come together to defeat a common enemy…and then… And that viewpoint of watching in your last moments as the red dragonflight comes to cleanse the earth with fire…

One of my other favorite experiences was going through the quests in Icecrown to recover pieces of Arthas’ soul–seeing him in the past and watching the eventual changes.

Also, along those lines, getting to do Stratholme in the time-walking dungeons.

I love the little moments in-game, too, where you learn new lore, like the jinyu, for instance. Or anything to do with the Titans and their various creations and cities and fortifications.

I also love the scene in Siege of Orgrimmar with Aysa and Ji where she stays with him. Those rare moments where faction doesn’t matter and kindness and love and, for lack of a better word, “humanity” does.

Honestly, though, everything mentioned here has been a great lore moment. 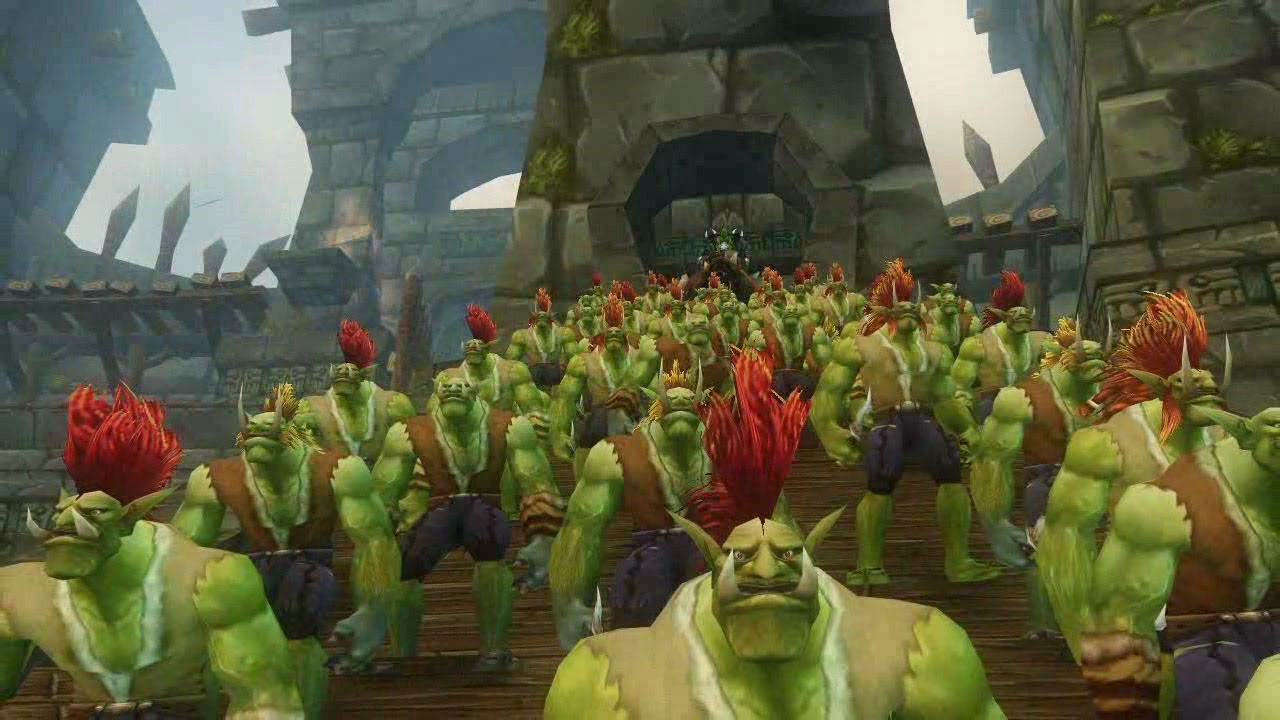 Probably Cata-era Silverpine, specifically all the moments with Bloodfang like how he executed Yorick in cold blood and tricked a battalion of Forsaken into a mine so he can blow them all up. He was just an awesome ruthless Worgen character and it’s sad he doesn’t get more screentime over the more boring Worgen characters that feel treated more like joke characters.

Aside from that, eh I don’t know. All else I can think of is that romantic story in Darkshore where you help a widowed man get his wife’s locket back and her spirit returns to him telling him to live the rest of his life in happiness for they will meet again. I’m just a sucker for romances, especially when they have a supernatural angle like that, probably the rare moment Blizzard knew how to do something touching and emotional without making it ridiculously narmy and silly.

How quickly this lost its spark.

To me I liked the beginning part where he was creepily whispering to Sylvanas in the shadows and the way he goes “I will have… my… VENGEANCE!” the most from that cinematic. Then it kinda lost all sense when he struck her so hard it knocked her across the room but didn’t draw blood??? Among other things, it’s just like the recent trailer where Anduin gets yoinked away, they know how to build up the suspense but then end it on a very narmy and silly note that reminds me of a Zack Snyder movie more than it should.

Always a hard reminder that Warcraft is junkfood fantasy, not really something trying to be a serious work like the writers try to make you believe.

It was epic… also frustrating as any chance for us DH having Light/Void=Fel shifting crazy mechanic spec taking in the basic nature of the Naaru life cycle with the birth of Fel when combining Void and Light was gone the window too!
My only hope for a new 3rd spec is that in the alternate Universe we get a Lightforge Illidan… if we don’t get it after SL that is!

Kil’Jaden and Velens final words and moments together in Legion.

My choice is tied:

Kil’Jaden and Velens final words and moments together in Legion

I was happy to finally see that moment, but I still felt a bit let down. Kil’jaeden dedicated tens of thousands of years, his immortal life, his freedom, the destruction of the entire universe, just to get his vengeance on Velen for leaving him… and that was it?

The only explanation for Kil’jaeden’s endless obsession was either the hatred of a spurned lover, or a person trying to suppress their unconscious moral doubt by killing the embodiment of those doubts (Velen). Him confessing that he did it all out of fear and saying “I guess I was wrong, maybe you can win after all lol” was insane.

Varian definently stating “For the Alliance” before being killed by Gul’dan.

Broxigar’s last stand and his monument on Argus.

Theres a lot over the years, but within the past couple expansions? Charging the broken shore.

Especially Horde side. I know we don’t have a lot of power houses, but seeing the demon mobs overrun characters like Baine, Thrall, and Vol’jin along with all of the players was amazing. In game I was running around trying to survive since I was pulling aggro with AoE (Chain lightening earthquake spam) and thats exactly what was happenning to us in the lore at that moment… trying to survive the giants mass of demons. It was a planned trap and the Horde was still muscling its way enough to survive.

That whole scenario is one of only things Blizz has pulled off well the last couple years. 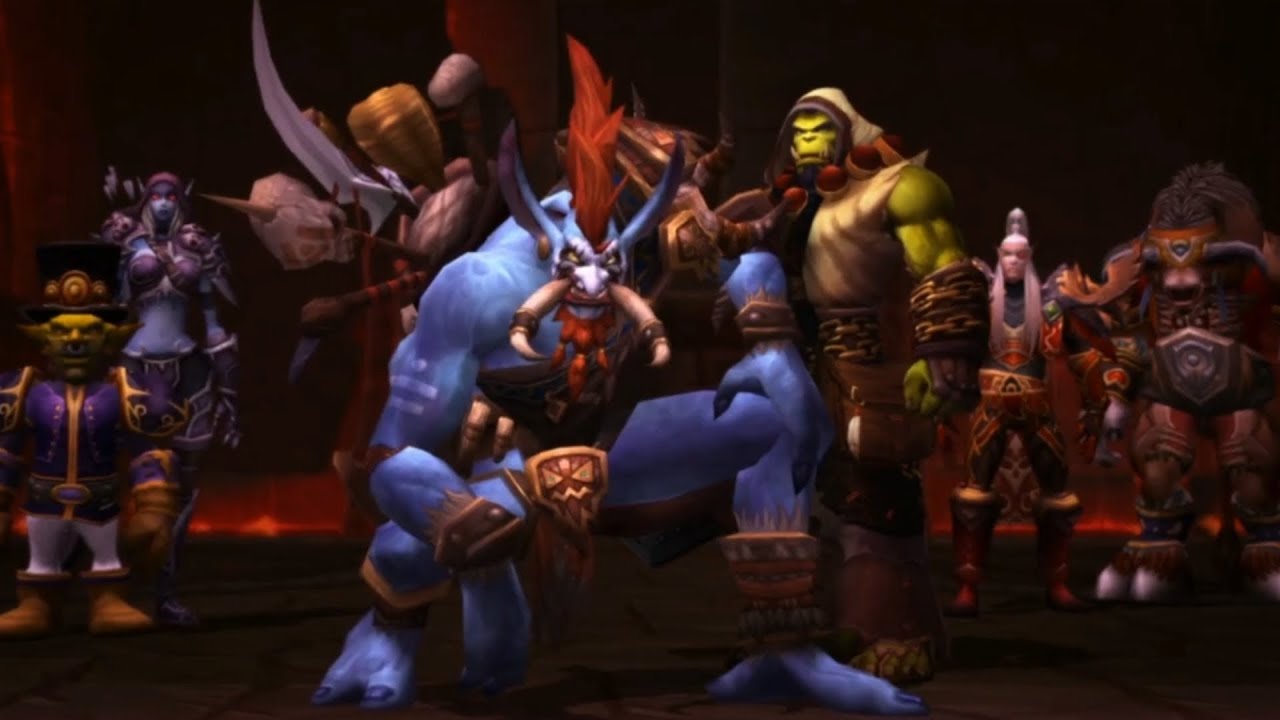 Literally this cinematic just makes you so proud to be Horde.

Thrall: “Yes, and it was you who held the Horde together during this madness. It was you who protected our honor. From this day forward Vol’jin, if you lead, I will follow.”

As Thrall kneels before Vol’jin, the assembled Horde leadership follows Thrall and unanimously acknowledges the approval

Vol’jin: “I…am not worthy…but I will give my all, For the Horde.

Varian: “I will speak your Warchief!”

Vol’jin: Staring Varian dead in the eye without fear and the Horde leadership united behind him “I SPEAK FOR DE HORDE!”

Like, this cinematic alone makes the whole controversial Horde civil war plot SO much worth it.

And a shoutout to the Alliance Broken Shore cinematic. 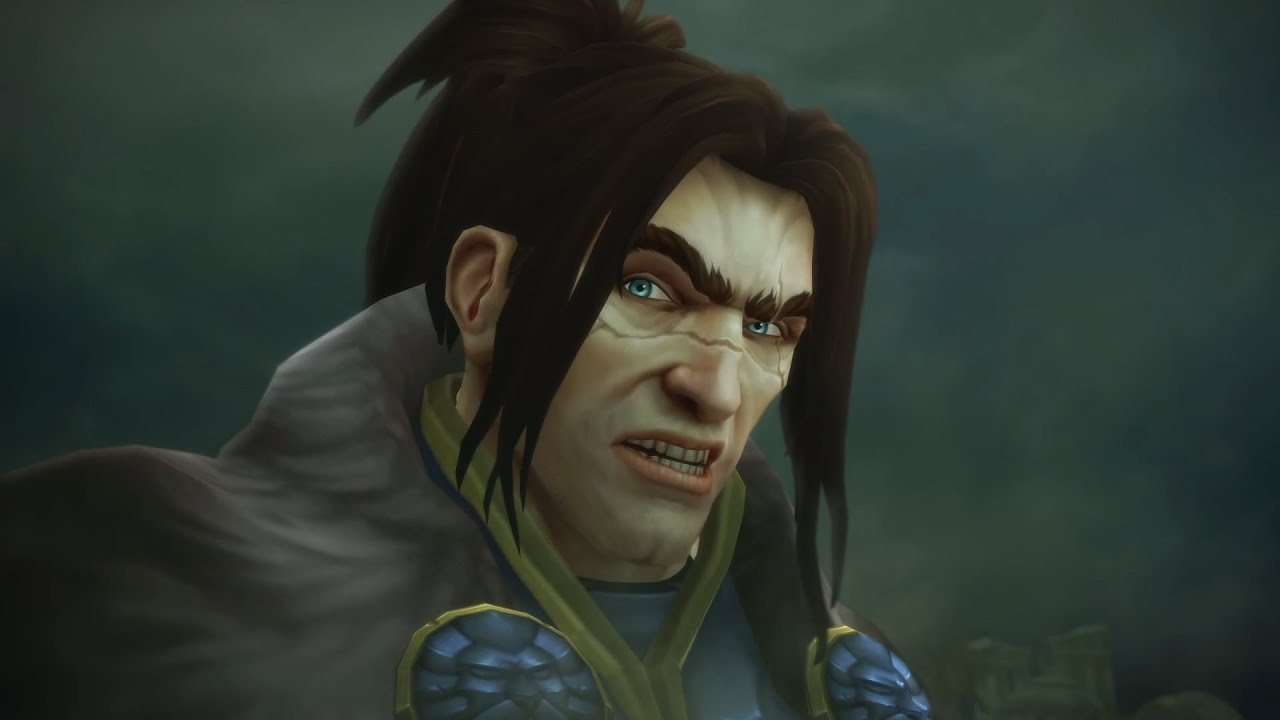 How do you make one of the most universally hated characters in WoW into one of my all-time favorites? Give him an emotionally and physically powerful death sequence. Make them go out in a blaze of glory. I mean, it’s the big dramatic ending to a story that was being built up with Varian since WoTLK, his rocky relationship with his son, his perception of working with the Horde, ect. From the physical feats, to his ultimate sacrifice, to the visual and musical cues, everything about this sequence is exceptionally well-done considering it was alongside the single worst death sequence in WC.

Old WoW, I’d have to say stepping through the Dark Portal into Outland.

Coming out on the otherside to a gate about 20x the size of the one I stepped into, seeing this shattered alien world and the Horde and Alliance already locked in battle with a demon army was an incredible start to BC. It was a hell of a ‘You’re not in Kansas anymore’ experience.

Most recently though I’d have to say entering Dazar’Alor. The Zandalari have had the better part of two decades of build up and it was worth it. Just this ancient imperial city, reaching out of this lush, primordial jungle like a jewel encrusted crown. Plus there’s dinosaurs everywhere which improves pretty much everything.

The story of Broxigar’s death. Where he lept through a Legion portal on one of their prime planets to help Rhonin and the others.

There in the prime Legion world that was a hub of reinforcements and more - Broxigar slew so many demons - eventually the higher general demons approached too that were on the same league as Kil’Jaeden & Archimonde of which were cut down – so much so that Broxigar stood on a large mountain of demons covered in blood, he attracted the attention of Sargeras himself of whom Broxigar turned towards, lifted his axe crafted by Cenarius and lept off with a powerful bounce (Most likely anime style, leaving a crater where he once stood) and slashed his leg … Sargeras, howled in pain.

Brogixag was the first mortal to leave a hurtful physical wound upon Sargeras, of whom in blind outrage lifted his colossal sword - And cleaved the planet Broxigar stood upon, blowing it up along with the demon portals helping save Azeroth.