What are these "logs" that everyone is talking about?

What are these “logs” that everyone is talking about ?

And how does it work ?

You can log the performance of yourself and your group any time you run a dungeon or raid. Some people will require them as proof of your past performance in order to join a group for harder content.

I dont’ really understand how this works… I’m a Tank but it looks like it’s grading me on my DPS ? And it’s giving me ZEROs on fights where I Heal ?

Why is it only showing me with one Karazhan run, when I’ve run multiple times ?

This all seems pretty sketchy to me since I’m just starting out with pretty terrible gear, then of course I’m going to rank low on the damage meter… But I’ve recently racked up some new gear and will be able to perform better, but it seems like a Catch-22… If someone just goes my old gear & old performance then I will never have better “logs” to prove myself with my newer, better gear ?

I think a more fair comparison would be “meters” because then you would be able to judge by all aspects like dispels, interrupts, healing, overhealing, and damage taken:
Were you being stupid & standing in mechanics you were supposed to get out of ? …Which in & of itself can also be mis-judged since just yesterday I called out over Discord for the other Tank to get out of the poison cloud on the ground, so that the melee dps could do their job !!!

What about if you’re doing Magtheridon’s Lair and you’re one of the five unfortunate people to be assigned as clickers ? …Then of course your DPS is going to suffer because of it ?

I’m a Tank but it looks like it’s grading me on my DPS ? And it’s giving me ZEROs on fights where I Heal ?

It lets you track all metrics. Damage done, damage taken, healing done, threat, debuffs, dispells, etc. It’s all there if you spend some time and look around.

It’s not giving you a zero on those fights, that’s taking all the logs on that fight for the week and comparing your run to every other logged player of that class. If you got a 0 healing parse on a fight where you were a healer, that just means you have some work to do to improve, and is the kind of thing that the aforementioned group leaders are looking for when they check logs.

Why is it only showing me with one Karazhan run, when I’ve run multiple times ?

That’s because you were only involved in one run that was logged. It doesn’t automatically track the whole game. Players have to use the addon to log the fight, otherwise it has no idea what is happening in the game.

I think a more fair comparison would be “meters” because then you would be able to judge by all aspects like dispels, interrupts, healing, overhealing, and damage taken:

As mentioned above, the logs do track all of this, so you’re not wrong in it being a fair way to track!

Were you being stupid & standing in mechanics you were supposed to get out of ?

Including a top down animated replay of where everyone was positioned for the entire fight.

I think it just boils down to learning more about the tool. Replying that you don’t understand it less than an hour after I posted it is completely understandable because it’s not something that can be completely understood without taking some time and looking through.

Record some logs yourself and see all of the things that it can do first hand. At the end of the day, it’s not biased. It’s literally a log of every millisecond of what happens during a fight. You can use that information to help yourself progress and get better, or you can let the elitests use it against you.

(if anything in this post comes off as brash, it’s not meant to be.)

Okay, thanks for the info… does the website show ALL of that extra information ? Or is that only available thru the addon ?

does the website show ALL of that extra information ? Or is that only available thru the addon ? 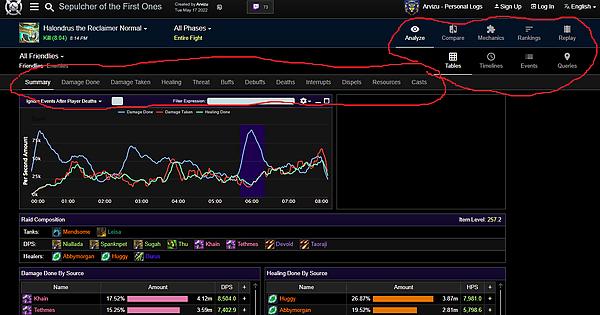 Here’s an example of a boss we did in our guild’s normal difficulty raid the other night. All the circled areas are where you can check out different information about that particular pull. 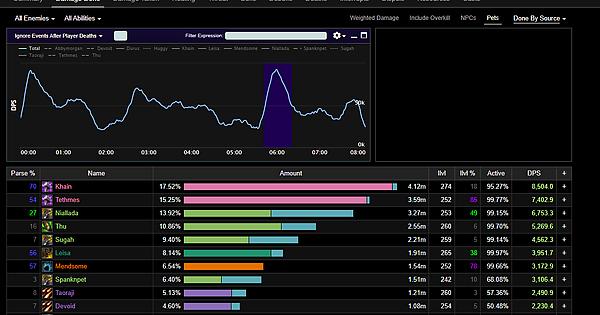 A breakdown of how the DPS did. 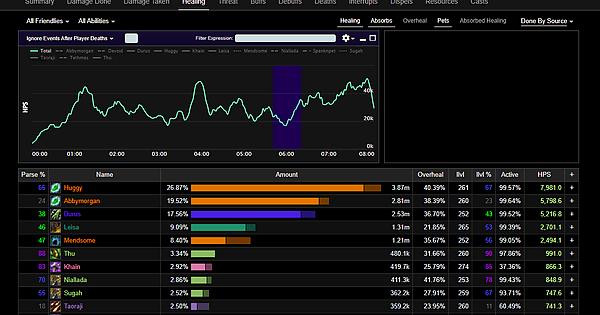 Here’s the healing charts for the boss. 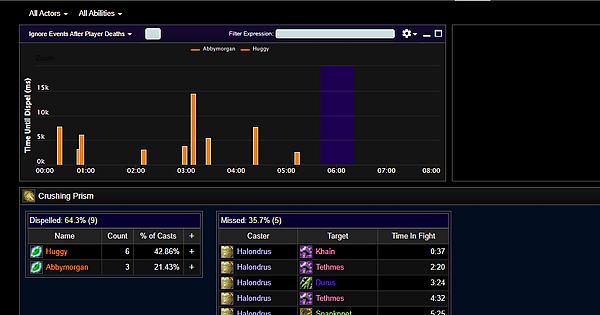 This one tells me how many times and at what point in the fight our healers dispelled various things. 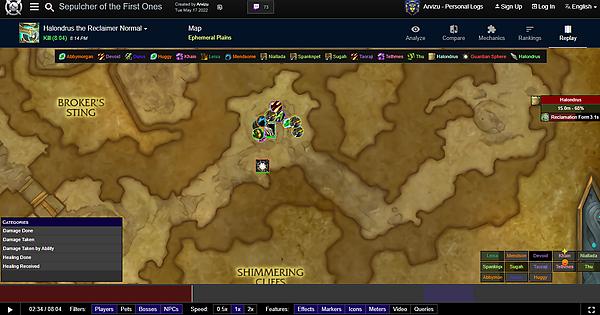 And this is an example of the top down animated replay I was talking about.

It’s all on the website once you have the log of whichever dungeon or raid run you want to look at. There is of course much more info, but those are just some examples of what you can find.

That would mean you were in the 99th and 97th percentile of people who played that class/spec combo on that fight for the week. Those are extremely good numbers. Generally you want to shoot for purple and higher parses, but blue isn’t bad by any means either.