Were the swords held by the hooded figures on the Dark Portal ever seen in game by anyone? I believe there’s no lore on the persons holding the sword specifically so interested to know about the swords themselves.

There’s no real significance to the statues on the portal. There’s no references that I can find that make mention of the two sword wielding statues specifically so it was likely just an aesthetic choice as the original design for the portal didn’t even feature the statues at all.

Though if you’d like to prescribe some meaning to them, I always thought that they resembled the original shadow council death knight from the original RTS games. Retconned lore said that Gul’dan and his death knights used the powers of necromantic magics to re-open the portal, so while retconned maybe it has something to do with them?

It’s up to interpretation.

Imagine if on character creation you were given the chance to RP walk through that portal to your starting area.

Go back to your perverse RP server. SHUUUN

They’re supposed to be the original death knights as the orcs had them. The souls of orc warlocks were placed into the bodies of fallen human knights and were used as weapons of destruction.

There is no lore on the swords themselves. If anything, I’m more interested in the fact there is a dragon head on the portal despite there not being any dragons originally from Draenor.

wod was such a good expansion, what if we got WoD Classic Servers next??

What does that have to do with any of this thread?

In the Warcraft movie, the statues are actually statues of Medivh.

That could still be the case for the game’s Dark Portal.

From the Azeroth side it’s a snake, but I believe from the Outland side it’s a dragon. Let me go double check.

Edit: Yeah. This is from the Outland side.

Well, what we see is the Outland side in the starting screen, I think…? 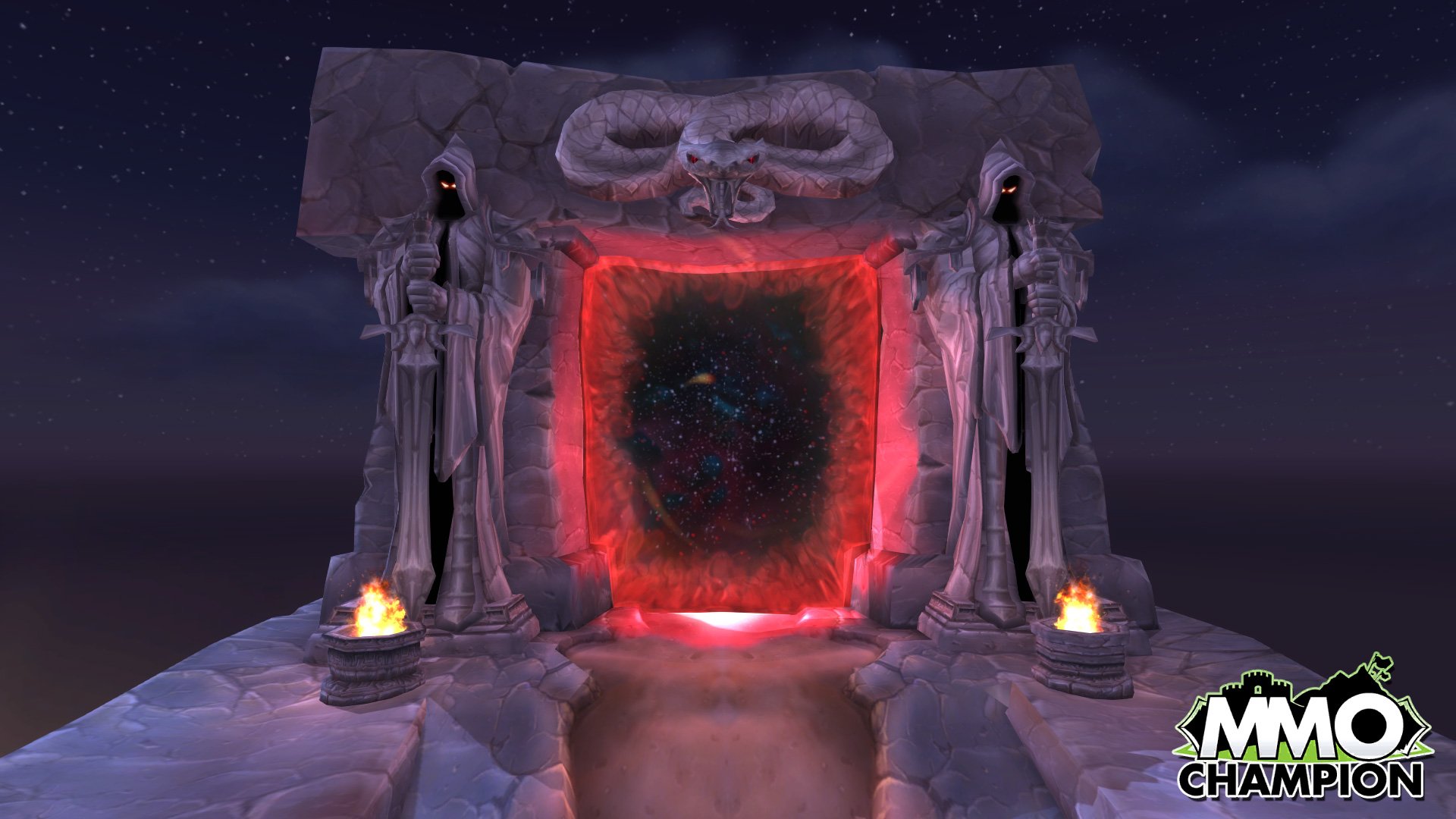 This is the side from Azeroth. Both sides feature the ominous orcish death knights, holding knightly swords that are likely twisted from their time being held but literal monsters.

There may be some truth in that upon recollection the sword does look like the one on Tabard of the Ebon Blade (https://www.wowhead.com/item=43155/tabard-of-the-ebon-blade) so seems even more likely to be DK related. @Mathrenas I never noticed the swords differed between Azeroth and Outland thats even more intriguing!

Those statues also appear beside the Warlock area near the lava on the west side of Blackrock Mountain, they have something to do with Gul’dan and the way he used them to build the original Dark Portal. But I can’t find any names or lore figures attached to them so they are more like decorations then any particular person or spirit.

They also appear in The Black Temple during The Burning Crusade, technically The Black Temple was built by the Draenei but the statues where most likely added by Gul’dan before he lost the temple to Illidan.

IIRC there’s also a portal very similar in zangarmarsh and one in the mountain area of nagrand.

We don’t speak of the sword of a thousand truths.

Judging off the screen shots in google those swords were always there.
And judging off the time that the portal was shown in WoW thy’re probably heavily borrowed off the Warhammer 40K watchers in the dark.

The dark portal in the Wc2 cinematic is nowhere near as detailed and the iconography is completely different but considering how much the lore and imagery has evolved since 1996 it’s really no surprise.

Were the swords held by the hooded figures on the Dark Portal ever seen in game by anyone? I believe there’s no lore on the persons holding the sword specifically so interested to know about the swords themselves.

Only as statues in summong demon stuff and probably the death knights from wc2, though it probably doesn’t make much sense seeing how medive summoned them there and I believe the whole door way was already there.