Transferred to a dead server!

Boy do I see where both sides are coming from here.
I do have to kind of agree with some people here in that, yes I loved Wrath, but thinking back on it I remember they started adding the instanced areas on top of areas and we all used to talk about how it would be nice if somehow all the servers were that way and you could just group with people from other servers.

Now, don’t get me wrong, I like that they are keeping Classic, classic right, that is important. However, shouldn’t some systems be considered as beneficial to even Classic servers?
If we could somehow go back in time to Wrath in the actual time of release I think most of us would be hoping for a system like that.
Not necessarily all the changes they have made. But server meshing would be a boon in my opinion.

Now, that being said, I totally get where those people are coming from that don’t want big changes like that.
It is a slippery slope. I do get that.
However, I don’t think adding this would make them go, oh, well lets also add in game systems from future renditions of the game.

This would be more like, hey, lets make Wrath better by making it the same, but with server connections.

But I digress. Nobody here is going to change anybody else’s mind. It is a lost cause trying to do so.
But I do see both sides.

You went to Old Blanchy, didn’t you?

Having a thriving raid environment is important for a lot of people.
IF.P is only representing a portion of the playerbase on any realm, but knowing that there are people that are already raiding there is important when deciding to xfer or not.
The only time IF.P should be disregarded as a possible metric when considering transferring/rerolling is for those who don’t, and won’t, raid.

Yes, but you should only be using IF.P to gauge thriving raid environments when we’re at the peak of WOTLK P1 raids… You shouldn’t be looking to it now to determine whether a server is worth transferring to… And if you are then you should at least be looking at the server pop during periods of TBC when raiding was at it’s peak, not now when people aren’t raiding.

Thousands of players have returned for pre patch who will be looking to raid in wotlk P1, myself included… IF.P doesn’t represent those people.

This is something we’re considering, but we’re planning to close Free Transfers to Sulfuras tomorrow for two reasons: The total active population is approaching full. The Alliance/Horde ratio is approaching 50/50. If that faction balance trend...

Not to mention sites like IF:P don’t update in real time. Like according to it, Sulfuras is dead with a whopping 1700 logs. Yet its being removed from free transfers because its now approaching full status. (10k+, with something like 40k transfers this week - If that number is to be trusted)

Guess you did kind of touch on it, i just didnt read it all the way - its getting late and im tired.

his is something we’re considering, but we’re planning to close Free Transfers to Sulfuras tomorrow for two reasons:

The only time IF.P should be disregarded as a possible metric when considering transferring/rerolling is for those who don’t, and won’t, raid.

Yes, obviously IF.P isn’t going to be cutting edge information.
I’m talking more about historical data.
As a raider, according to IF.P’s past data, I would never xfer to, say, Earthfury, even though it very well may be a lively leveling experience otherwise.

I would also be hard pressed to xfer to Sulfuras because I don’t have any sort of proof that there has been a sizable influx of raiders to the server.

The community is using whatever aggregate we can get our hands on, since Blizz won’t publish any of the real numbers.

The only time IF.P should be disregarded as a possible metric when considering transferring/rerolling is for those who don’t, and won’t, raid.

I still stand by this and will continue to say this. Thank you, though.

do you have any sources? Not doubting, but would really like to read more.

For the first part, Classic’s code… that explanation was basically everywhere, by Blizz as part of their Classic announcement PR. Classic was rebuilt from the ground up on the modern code and database structure. It was the biggest hurdle they had to overcome to see if they could even do Classic in a feasible manner.

As for cross realm, I got my wires crossed… It was during Classic Era, but was found out during the TBCC Beta, and actually went live in the pre-patch for a short time. There was a video of it made here: 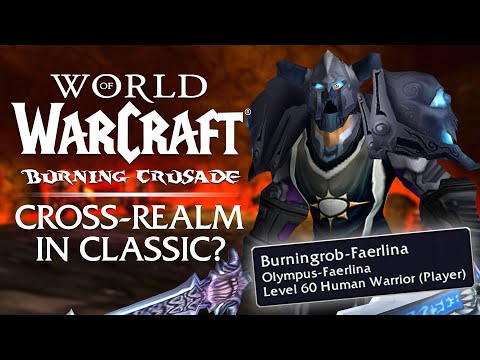 You can see that he was able to get players from Faerlina to group with him in a dungeon, while being on Pagle.

EDIT: And I’m looking further but can’t find it, I’m just remembering off the top of my head so take it with a grain of salt - I remember that there was an ability to run a command to open Retail’s region-wide Group Finder UI as it was live in BfA at the time, in Classic.

Old Blanchy is medium, on its way to high. Hundreds of transfers all day long. Nothing but spam in the LFG chat: “HoW iS ThE PoPuLatIon??” or my personal favorite: “HoW dEaD iS ThIS SeRvEr?? LoL!”

You may get a break as OB is the only server to xfer to soon.

Sulfuras is getting locked.

Obviously they changed this for whatever reason, but I think it’s not productive to server populations if they keep the information hidden.

Let’s say you got what you wanted. They made server data open, and you could tell with fine detail what server was “best”. No one would go to 2nd or 3rd best, unless they were forced. Which creates even more mega servers.

Keeping the information hidden, allows for players to end up places they wouldn’t have otherwise chosen, but that will become prosperous as others join it. There will be those that wind up in a permanently bad place, but it beats race to the bottom mega server for formation.

Let’s say you got what you wanted. They made server data open, and you could tell with fine detail what server was “best”. No one would go to 2nd or 3rd best, unless they were forced. Which creates even more mega servers.

Sure, if that’s the only precaution they’re taking to fix the issue. They should be publishing this information in addition to other steps. If people are aware of the populations then they won’t feel like they’re transferring to a dead server. Conversely, they also won’t think they’re creating characters on servers with a queue either. Not everyone wants to play on an overpopulated server. Some people just want one with a healthy population.

Keeping the information hidden, allows for players to end up places they wouldn’t have otherwise chosen, but that will become prosperous as others join it. There will be those that wind up in a permanently bad place, but it beats race to the bottom mega server for formation.

I’m inclined to disagree. While people would certainly join bigger servers, I don’t believe that everyone would just dogpile into a mega server if more populated (but not overpopulated) servers are known and available. People rush to mega servers because it’s a guarantee that they get their money’s worth without feeling like the server they choose is going to just die.

There’s really not a downside to knowing more about the population of a server if Blizzard is proactive and watching the populations of these servers. They could simply lock a server and redirect traffic to a new server that has a lower population. Players would be less skeptical about transferring if they knew what to expect when doing so. Sulfuras transfers were a success, but if players understand exactly what they’re getting into (e.g. they see an indicator saying the population is increasing significantly) then they would likely move quicker.

Sulfuras is full, queues will only get worse from there! This is the PRIME time to encourage people who are hesitating or unsure about taking the free transfers.

Sulfuras is full to an extent. Blizzard has stated they might close it off to horde transfers, but keep allowing alliance to transfer there to get it more of a 50/50 faction ratio. Which Blizzard stated the server is near that.

lol bro its pre patch with a 6 hr que… are u gonna sit in a que for 4 months before ques die down? everything you morons have said so far defending mega servers hasnt happened

we are a week into pre patch and ques are getting larger. i remember when you idiots said “give it a week and it dies down”
even if it takes 2 months for ques to disappear. thats 2 months too long. said sulfuras was a dead server. its now near 50/50 just stop talking rat.

Believe it or not, Blanchy people tend to do their lowbie levelling in the west coast AM…less competition, and THAT needs no groups…until I hit about level 20 I don’t even rejoin LFG on a character. Your issue isn’t ‘dead server’ it’s ‘unrealistic expectations’ You moved from “Manhattan” to “Grand Rapids”…different vibe, different timings, different pace. Not being angry just saying breathe, adapt, learn the new pace and play.

Sulfuras is full to an extent. Blizzard has stated they might close it off to horde transfers, but keep allowing alliance to transfer there to get it more of a 50/50 faction ratio. Which Blizzard stated the server is near that.

That is absolutely fantastic news. ALL PvP servers need this treatment! Glad to see it.