These folk are the closest we’d get to playable dragons. 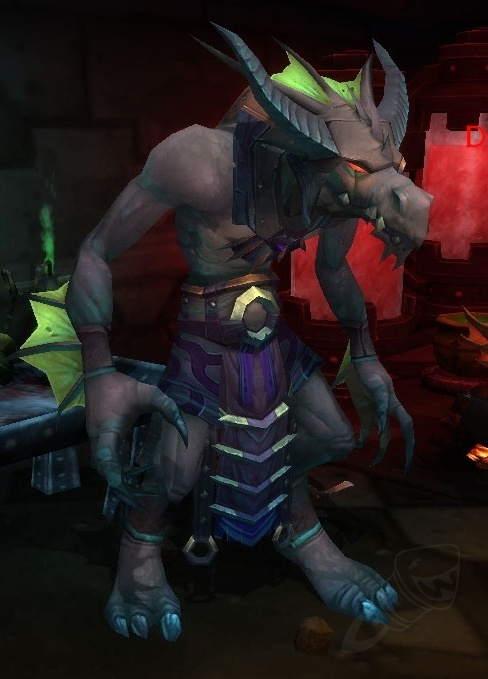 I wanted to type some regarding female Saurok and design. I’ll link the female Saurok picture from the first post again for reference:

You may notice that this Saurok has something that is rather unfitting for a reptilian race. Specifically, the Saurok appears to have breasts. This is something not really found in reptiles in general, and should Saurok ever become playable, I feel that there are different ways to go about designing female Saurok.

Just a side note, I am not posting this to insult or make fun of anyone that worked on that image, but rather to show different ideas of how a female Saurok could be designed should they ever become playable. Many designs in Hearthstone of races that get added to WoW, such as Tortollans, are very much different in the two games.

So how does one design such a race that you can tell between males and females? In terms of lizard men, there are a number of ways. Size, scale color pattern, and horn designs are great ways to differentiate males and females.

Currently in-game, there are no female models I am aware of, but some Saurok models have different designs. A Saurok with frills is shown here: 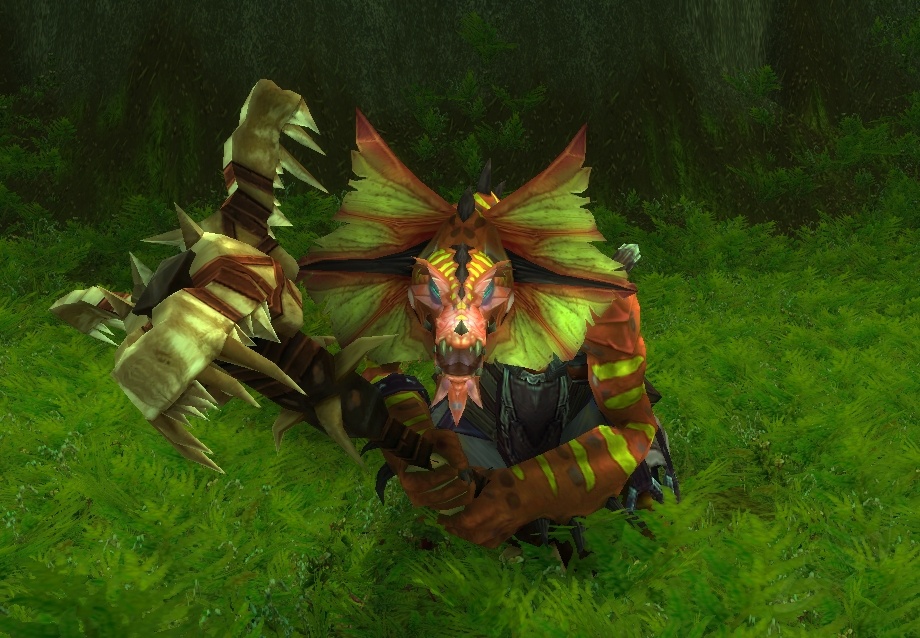 It would seem that Saurok are capable of having unique features, which should be kept in mind if they were to become playable. Different horn types and aspects of different species of reptiles, some exclusive to males and females, are great ways to design playable Saurok models.

So what about other games that have playable lizard man races? What did they do in their designs? Here are a few examples: 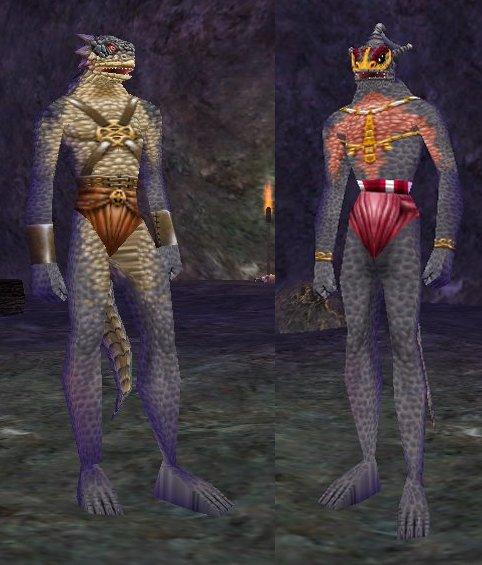 Here we have the original models for male and female Iksar from Everquest 1. 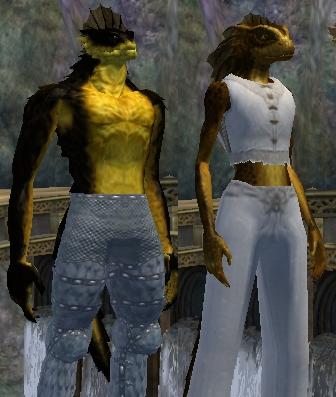 And here we have the Iksar from Everquest 2.

As we can see, they both are very distinct and, from a glance, people can tell which is male and which is female.

This is a video of a female Argonian creation, with commentary, from Skyrim. There are different features in their character creation, though I really don’t see hair belonging on a reptilian race.

And here we have a female Argonian being created from Elder Scrolls Online.

Ultimately, female Saurok should be designed to reflect them being a savage reptile race. I would prefer to avoid trying to make them look sexy and just putting breasts on them. There are plenty of ways to go about making them look unique, and with all the different species of reptiles out there in real life, I’m sure some neat ideas could come up for Saurok should they ever become playable.

Agreed. Though i will point out since they’re origins involve heavy flesh warping it’s not outside the realm of possibly for them to have breasts.

Even if that could be the case, my opinion is that taking an animal to base a race on and just putting breasts on them isn’t really the best way to design females of that race. Especially if it is an animal that does not have them, like reptiles.

My hope is that for any reptilian race that becomes playable, there is time for creativeness to occur in the design process. For Saurok specifically, between horns, scale and tattoo colors, and body size, I would think that something more interesting could come out of it, and the race would shine and be a lot more interesting if done correctly. ^^

All I’ll contribute for now are the classes I think they would have and perhaps a couple of racials.

Racials:
Cold-Blooded: 3% resistance to frost magic.
Basking: During day time and while outdoors, the Saurok recovers 1% extra HP every 3 seconds while moving, and every second when not moving.
Molt: When used, the Saurok sheds old and dead skin, removing all debuffs and instantly recovering 30% of lost HP, but is more susceptible to physical damage for the next 10 seconds (5min cooldown).
Natural Scavenger: The Saurok will farm an additional unit of material when gathering in every gathering profession.

Yeah, it’s long, but I kinda got inspired a bit and just let myself write. You know? I figured this could get minds flowing of how the Saurok could begin to think nowadays. Surely there has to be more than just ex-tools for the mogu, only meant for violence. Eh?

I got the name “Heldremys” from a modification of “Helodermatidae”. Or… GILA MONSTER SCIENTIFIC NAME!

Ok, I love the race and all, but the reason people want them is visuals alone.

There is no lore supporting them joining anyone, they are so crazy that even at the certainty a saurok would die, he would still move in to kill his enemy even knowing he wouldn’t survive the outcome simply because he can’t control his own murderous impulses.

I totally want the race though, I would like any sort of craziness they would go through to make them playable.

Uh, you do know there’s plenty of Saurok pirates in Tiragarde Sound getting along and functioning with the other pirates right?

yes, but we don’t know the full details of that, but we do know established lore of past accords.

The pandaren to this day want to make peace with them, as well as my prior comments about saurok.

Ok, I love the race and all, but the reason people want them is visuals alone.

I will admit a reason I do want them is because of wanting a lizard man race in the game playable. However, their backstory and possibilities of what could be written about them also very much interest me.

There is no lore supporting them joining anyone

Correct. Saurok as we know right now are angry NPC mooks for quests that hate everyone and don’t have much beyond that. That isn’t to say that something couldn’t be written for them in the future. As I mentioned before, different races that are playable currently had situations created or were reworked to make sense in joining a faction. Some of them started off as enemies of said faction. It isn’t impossible to do the same for Saurok, although as I mentioned before, it is a very uphill battle.

Uh, you do know there’s plenty of Saurok pirates in Tiragarde Sound getting along and functioning with the other pirates right?

I thought on this some more, and while it is possible for Saurok to break off and go elsewhere, some of these particular Saurok could have been outcasts from their tribe on Pandaria. They’re obviously not virtuous, going into piracy, but it is possible for them to work with others. Now, it could be argued that these pirate Saurok are doing it out of necessity or for “the shinies” so, in theory, some Saurok out there with different views of the other tribes on Pandaria could work with others if the situation called for it.

The pandaren to this day want to make peace with them

I do recall a NPC mentioning that they keep trying to make peace with the Saurok, while some Pandarens call them heartless. The Saurok on Pandaria eventually negotiating with them seems unlikely, much as some Pandaren want to have peace talks over dinner without them in pieces for dinner, which is a reason I lean towards a tribe of Saurok that just left Pandaria and are more receiving for one reason or another on lands an expansion takes place on.

I very much enjoyed the story, and it shows a neat way of Saurok evolving past the primitive stage of their race and slowly evolving into something that would be more self-aware and likely to form a civilization. ^^

Could be the Pandaren AR, Neutral until they choose a faction.

While I would never play one unless they had a stellar racial. I support them for those who would like to see them added

Given that people mention how Blizzard, for one reason or another, was not fond of how neutral Pandaren turned out, it’s hard to see there ever being another neutral race. Even if it is possible, I personally don’t see Saurok as either a neutral race or an Alliance race.

I really don’t see Saurok ever fitting in the Alliance in any way. The Alliance would likely just see them as primitive monsters, especially given that both they and the Horde had issues with the Saurok on Pandaria. Even if they got past that, I can’t imagine them being trusted enough to walk around Stormwind or Ironforge, let alone being treated very well on that faction. Especially since they were created using dark magic, which would likely cause some issues with some of the Alliance races.

Saurok are a tribal race that likely would be heavy in shamanistic rituals. They also were lizards that were turned into what they are by the Mogu to be used for selfish purposes. They strike me as being kinda similar to Orcs and what they have gone through, although Saurok are more savage than Orcs.

As mentioned a few times in the thread, if we were to go with the theme of them questioning what they are and progressing as a race, I see the Horde more likely to connect with them and help train and guide them if circumstances occurred where they work together. The Horde, in my opinion, is suppose to represent races that band together for survival against those that would call them monsters, and Saurok fit that narrative very well.

All of this is just my opinion, of course. I honestly view Saurok as a Horde exclusive race, and think they would fit right in.

I honestly view Saurok as a Horde exclusive race, and think they would fit right in.

Sauroks have the same kind of vibe as taurens and trolls as stuff for the horde, and also have all the spices that would make it possible to be recruited into a node similar to the ones the goblins were during the cataclysm! Sauroks has a good visual appeal! Like other potential races and currently playable in warcraft.

We see the same with the rendorei, which has as an appeal, to be a version of blood elf.

In the case of sauroks, we would have a really unique addition!
Authentic and not just a copy of an existing race!

They also were lizards that were turned into what they are by the Mogu to be used for selfish purposes.

And then the mogu tried to kill them all ;-;
Saurok should join the Horde on Zandalar!

“There are mogu on this island?”

< The saurok narrow their eyes >

And then the mogu tried to kill them all ;-;

They tried during “The Great Purge” and utterly failed when the Saurok took the Mogu Empire head on and handed the Mogu their collective butts while throwing their emperor off a cliff, with the body never being found, leaving their empire in chaos.

At least that is my understanding of it. Point is: don’t mess with the Saurok!