For the sake of clarity I will note that I, myself, am not a new player. I’ve played WoW more or less continuously since Cataclysm, never missing an expansion during that time. Before that I was a big fan of Warcraft 3. So for me, a love and understanding of WoW’s lore has come naturally, and more often than not I love seeing it fleshed out and developed in game.

However, recently I persuaded my wife to give WoW a go, and she had some feedback that changed my outlook on WoW’s new player experience a bit. In short: she felt the story was unclear, very suddenly involving high stakes and confusing plots she didn’t understand.

Exile’s Reach was straightforward enough. But then, straight to Boralus. Suddenly she had a lot of questions. Who the hell’s Jaina? Why the hell am I under arrest? What’s a Theramore? She felt like she went straight from fresh-faced adventurer to close confidant of the King, and felt like a lot of story beats were not properly explained.

Which, to be honest, is fair enough. For someone like me who’s been actively engaged in WoW’s lore for over a decade, I get it. I know what Theramore is. I know who Uther is in Shadowlands. I know what happened in the patch content of BFA, so it doesn’t feel weird to me that we jump straight from fighting a war against the Horde to working together against the now-former Horde Warchief in the realm of the dead for some reason. But new players are likely left confused, and thus, unsatisfied.

There should be an in-game mechanism, I would suggest either during or after Exile’s Reach, to succinctly explain what actually happened in WoW’s history. We cannot expect new players to read Chronicle or religiously delve into the depths of Wowpedia before the game has even had a chance to really pique their interest, you know?

So my suggestion would be something like this: an NPC on either Exile’s Reach or in Stormwind/Orgrimmar after its completion who is a “loremaster” or something to that effect - something clearly marked out. If it’s Lorewalker Cho I’ll probs dance for joy but it can be anyone. That npc should have a variety of dialogue options that spark short animated cinematics, not unlike the Warbringers and Afterlives series (though they don’t even need to be as long) that briefly summarise every expansion, in full. So, for example, one such dialogue option could look like this:

“Remind me what happened when the mists around Pandaria parted?”

“Garrosh Hellscream, Warchief of the Horde, launched a sudden and brutal attack on the Alliance City of Theramore, utterly destroying the city in the process. After this, with the Alliance and Horde engaged in total war, a previously unexplored continent named Pandaria, inhabited by the friendly Pandaren, was discovered. Alliance and Horde adventurers scouted out the continent to prepare the way as their fleets converged upon the continent. As War broke out, the Alliance sought to contain the dark and destructive power of the Sha, while Warchief Garrosh of the Horde sought to use it, even trying to murder Chieftain Vol’jin of the Darkspear Trolls for trying to stand in his way. While brave adventurers worked to defend Pandaria from other threats, such as the wicked Mogu and their Thunder King, factions rose up within the Horde dedicated to bringing down the increasingly tyrannical reign of Warchief Garrosh, who had started to actively purge dissidents from the Horde, proclaiming that the orcs alone were supreme. Eventually, the Alliance worked with these Horde rebels, who called themselves the Darkspear Rebellion, to attack the Horde capital of Orgrimmar and bring an end to the reign of Warchief Garrosh, placing him under arrest. Vol’jin was chosen as the Horde’s new Warchief, and the Alliance and Horde agreed to peace… for now!”

Now I’m not a spectacular writer and I’m sure there’s lots to pull apart in my little summary, and please do. But something LIKE this being implemented would go an awful long way towards making the game’s story accessible. It fills in the blanks we tend to miss by not doing patch content in our leveling experience, and it provides the bones of context so that if the interest of new players IS piqued, they’ll then WANT to get a hold of the Chronicle Books, check out Wowpedia, play through old patch content and so on.

So yeah, just a bit of story-related feedback that I hope the devs see I guess lol. If anyone has anything to add, subtract, or attack me for, please do

I’m all for it, but this won’t get much traction on the Story Forums. General Discussion, despite being a wretched hive of scum and villainy, is the place for suggestions like this.

They started doing that somewhat, but haven’t kept up.

On top of the “lore summaries” you mention, they need to finish the dungeon journal for vanilla onward, and they need to retroactively add Lore Books for each zone and have a “library” somewhere in Orgrimmar and Stormwind of all of them.

This is a pretty great idea. The prospect of having new animated shorts alone would likely get people on board with the concept.

I really enjoyed those animated shorts. I wish there was more.

Kind of reminds me of Diablo 1. Where there were books scattered about that told stories and had narration.

I guess some problems with that as far as the WoW Devs could be how they handle retcons and the direction of future lore. If they had this concept before Legion, the descriptions of BC and Illidan may have been wildly different than if the concept happened today. And depending on what they do with Sylvanas, that could have the same ripple effect backwards in time.

It is a good idea. I just mean Blizzard seems to step on their own foot when they try things like this, because of their perspective on the malleability of previous lore.

It’s a good idea. They need to change something. It can be confusing for new players questing through Azeroth.

Of course never ending retcons etc. won’t help and we aren’t getting updates to the world (or only very limited ones and even those are rare). All in all Blizzard needs to change their approach to this problem.

You’re right, if veteran players can barely keep track of the changes, how do they expect new players to be able to learn the lore

I’ve been playing Classic lately and they had two lore books about WC3 in the human starting zone, I liked that. I liked stubling on lore.

What I don’t like is lore that leads no where. There was books in Karazhan for example that served the same purpose as Old God whipsers that foreshadowed things but it went anywhere. They need to reward thier players who got hinting for lore.

As someone who experienced the other side of this, I agree 1000%. I had no previous experience with the Warcraft franchise when I started playing during the Legion pre-patch after being encouraged to try it out by my boyfriend. I decided to play a Blood Elf for my first character (Vandraeda, who is still my main). First of all, the Legion pre-patch was an awful time to start as a brand new player if you wanted to learn about the story through questing, because the invasions would get in your way. I’m glad I was able to experience them, but I hated being almost done with a quest and watching all the NPCs I needed disappear because an invasion had just popped, leaving me with the choice to either go complete the invasion or wait four hours for it to be over. Secondly, since I was starting with a Blood Elf character, my first questing was in Burning Crusade zones, and there’s an inherent assumption in a lot of Burning Crusade content that the player is familiar with the events of Warcraft III and Vanilla. Thirdly, since this was before the multiple leveling revamps that have happened since Legion, my leveling path was a time-traveling mess, and my experience going between expansion zones was very confusing. It felt like that in my quest to understand the story of what I was playing, I was spending almost as much time outside the game looking at Wowpedia or watching Nobbel’s videos as I was playing the actual game.

BfA and Shadowlands are at least a little better in offering small partial explanations of significant events than previous expansions, but there could still be some improvements. Jaina’s Warbringer short does a lovely job of painting the broad strokes of what Theramore means to the Kul Tirans, and between Uther’s Afterlives short and his 9.1 campaign chapter you can at least get the most important story beats of his history with Arthas, which is a vast improvement over the lack of context provided in Burning Crusade. Even then, though, I suppose that we could use a refresher summary on Arthas in Shadowlands at this point, rather than assuming that new players know who he is, as it’s been eleven years since Wrath launched and eighteen years since The Frozen Throne released. Honestly, even just having an NPC in Oribos who plays the Wrath cinematic trailer might be helpful, as I think it does a very good job of introducing both Arthas and the concept of the Lich King, even if you didn’t know about Warcraft III.

Edited to add: it would also be good to get broad summaries of significant events that either used to be in the game and have since been taken out, or that were portrayed in media outside the game. For example, the removal of the Battle for the Undercity quest line leaves the Wrathgate cinematic without its full followup, which is confusing. Alexandros Mograine plays a significant role in Shadowlands, but most of his pre-existing lore comes from either removed Vanilla content or the Ashbringer comic. Without those, unless a person has played through Wrath or Legion death knight content or Legion paladin content, they’re not likely to really know who he is, or what he’s referring to when he talks about his family and his history. Since brand new players don’t play through Legion before reaching Shadowlands content, they’re very unlikely to have any idea why the Ashbringer is important.

While it may be a pretty long “story” it would be extremely nice if they did an expansion “Intro Cinematic” similar to the ones you get when creating a new character. 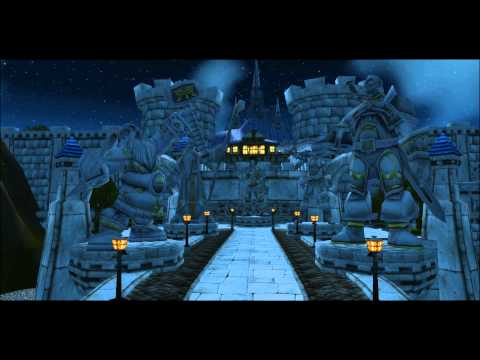 Every expansion has one to summarize what had happen previously, and they simply play in order.

I really think the last thing a player needs is to have it through a multipage wall of text to story that’s not really relevant.

Maybe you don’t know what Theramore used to be, but it doesn’t matter as that has nothing to do with the character’s current assignment.

I really think the last thing a player needs is to have it through a multipage wall of text to story that’s not really relevant.

Which is why I suggested cinematics or cutscenes lmao