Any tips for Domina fight? I ran it as a 219 BM and couldn’t push her past ~48% without being overwhelmed by the invisible mobs… flares traps etc just took to long to gather them all up before I’d have too many stacks on me.

I fought her by the door and feigned everytime she spawned the assassins.

Thanks got my mount!

my feign death didnt stop the invis mobs from targeting me from the middle of the arena.

It’s kind of hit or miss, basically you gotta be tucked right into the door where she spawns, let one round of axes hit you then mend pet (so it doesn’t die while you fd’d) then feign for like 3-5 seconds… you should be able to stand again and no more axes

I got her down to 16% and then gave up. It was too annoying just getting back to her each death. lol

I just got it as SV. Domina is a pain, had to flask and hero

I fought her to the right of her spawn point, up against the wall. When the assassins pop, FD and just wait for the last axe to hit you before you get back up. Other than using misdirect, it’s the only technical point of the fight. I did it at 214 without lust or anything. I have an armor kit I used for the extra health, but it never really mattered as my health didn’t get that low. I used double clefthooves for pets. Good luck!

How did you handle the trash just before her?

I went in to see how to get past the bosses and get a feel for the fight and the first assassin spawned some little things and the stack of damage murdered me fast.

I had FD just before the trash and as I was summoning my pet and turning on growl and MD I was toast.

Is there something special or did I likely FD too close and couldn’t redirect the adds?

I just skipped the trash and tanked her at the door, FD everytime she casted assassins

Oh! Well damn. I thought you had to clear the area…my bad. Thank you

How did you handle the trash just before her?

I know Strippen answered this already, though I’m sure most of the trash can be done if you feel more comfortable clearing stuff rather than skipping. I plan to make some attempts tomorrow evening on both heroic and mythic difficulties. So if I think of any tips for the trash in particular I’ll post some more.

For the boss fights, I’ll almost certainly upload a video or two for visuals to show where to fight them at, how to handle adds, etc.

Wish you luck though!

I ignored the trash before the boss at the time (camo’d by them), but after downing Stradama, I ended up killing the pack next to the NPC as well as the giant behind it before I picked up my mount. On heroic at 214, this was decently trivial as a BM. Just send in pets and melt things down.

I think I FD too close and couldn’t get aggro on my pet (my growl was initially off) and of course, FD was on cool down.

It initially felt like I was stepping in over my head but now I think it was just poor positioning. It’s so different when you don’t have a tank with you. Lol.

I just need to learn the specifics a little better and I’ll try again. Thanks.

For the trash before domina wait until the venomling despawns before fighting them. Focus the ambusher and use intimidate/bursting shot for the bulwark.

For Domina herself I swapped to a turtle from a ferocity pet and lusted during the dismiss pet cast. Fight her at the door and wait to get hit by all the axes before you get up from FD. Keep mend put up 100% of the time and use exhilarate to heal your pet not yourself. You can ignore the stun mechanic but if you need to, turtle it to avoid the stun.

I did it as survival it took me a few tries to figure out the optimal way to do it but its 100% doable.

I went in to see how to get past the bosses and get a feel for the fight and the first assassin spawned some little things and the stack of damage murdered me fast.

So follow up! I ended up beating the entirety of PF on mythic difficulty. I tried the door strategy that was mentioned here but that came with its own problems on mythic (namely, the isolated debuff with 8 second stun).

However there’s another spot you can fight at, up on the hill near the entrance to Domina’s area where you can avoid that debuff entirely on mythic. Ended up beating it though the assassins were either buggy or I was screwing something up and wasn’t sure what (most likely the case) where they would sometimes go back to attacking me. 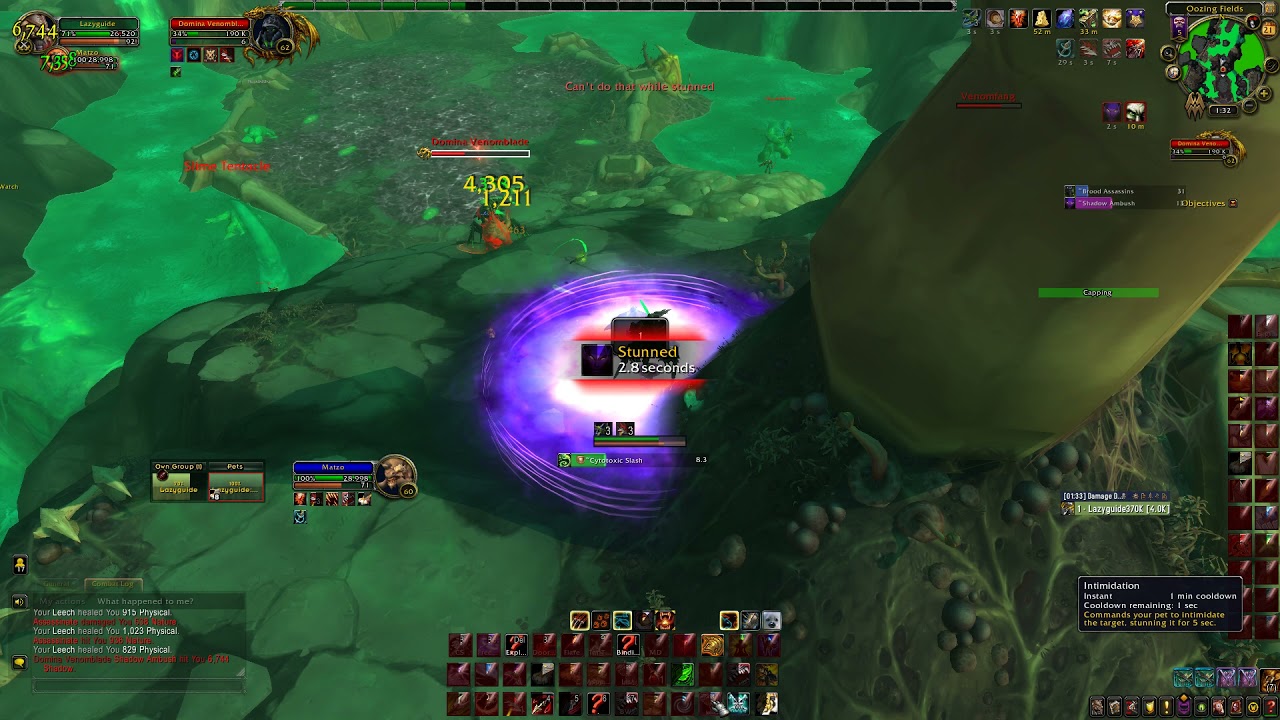 That video is of the fight on mythic difficulty.

Margrave Stradama was much easier, only thing I had to worry about was soaking the AOE circle attack from the add since I didn’t have quite enough DPS to just outright kill them. But it was fairly easy to survive through with leech healing via mend pet / exhilaration along with long stretches of taking no damage at all thanks to her ducking into the acid pool. 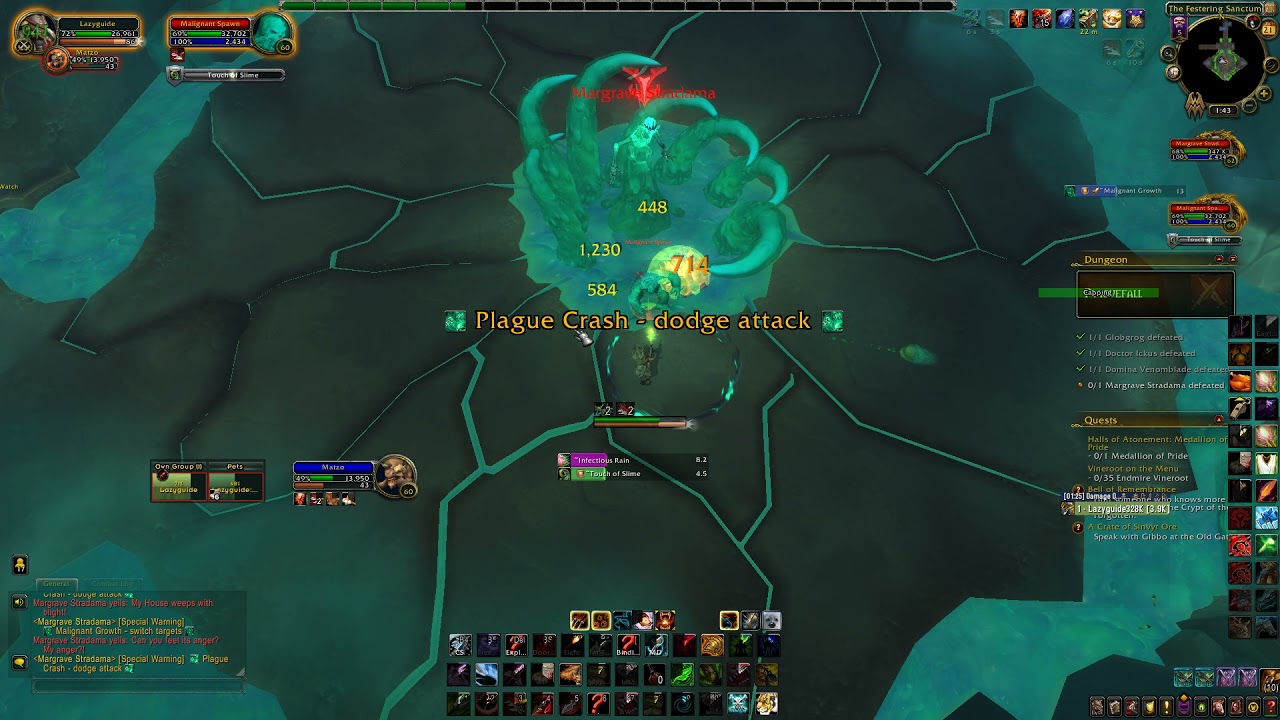 Other videos for Glubgrog and Doctor Ickus are also up but they can both be skipped for those who want to skip them. All of the trash can also be done with little issue or skipped depending on where you wish to fight Domina.

Edit: As an aside, the Globgrog fight wasn’t nearly as bad as it looks in my video. I tried some positioning things out at the start that I decided to stop bothering with and I mostly just kept messing up my binding shot / intimidation rotation out of wanting to hurry up lol

You did it on Mythic.
Jeez, way to put on the pressure. Lol. If I can’t get it done on Heroic, I’m gonna be so embarrassed. Lol.

And once again, you have given me a kick in the pants and I will endeavor to conquer this as well.

And once again, you have given me a kick in the pants and I will endeavor to conquer this as well.

I have a pretty good feeling you can get the slime serpent mount :>

Honestly, if you can get Domina down, you should have little issue with Stradama. She was a lot easier I found.

I followed the YouTube guide of DurendilLeHunt. I put my pet just at the ‘reset’ line for the 3rd boss and I went up the hill a little until I was at max range. It took a few tries to get the position right as I kept accidentally leashing her and resetting. I had to put my pet a few feet further down than was shown in the video. I used a Clefthoof and kept the heal running on him as he would get quite low.

Last boss, I used the suggested Legendary, I think Craven Strategem or something? It removes most debuffs from you, which included the dot she uses (stacks to 4, and you FD when the 4th stack hits). I took very little damage on both bosses on heroic.

To be honest, I found the run to get to the 3rd boss to be the hardest thing about doing it. I died a whopping 7 times before I realized the tentacle things before the 2nd boss were targeting and shooting me through the ground. I mostly ran and FD’d my way through, only killing the tentacles before Ickus and the trash along the right side of the ‘lake’ between him and 3rd boss.

I did it! Only Heroic because I’m a filthy casual. Lol.

I just needed to find the right spot without resetting her. Managed to avoid most of the axes. Took me awhile to figure it out.

I did clear the area trash and I think that helped.

Getting to her was just the worst.

Thanks for all the advice and support.