Wow, nice, I bet namisan will be happy too, 3rd time’s the charm!

search by the server name, the realm got copied so you might not see your chars until you log into the server with your client for the first time.

Yup had to restart my client for my characters to even show up on the realm too. Almost made a rage post lol

Wow, nice, I bet namisan will be happy too, 3rd time’s the charm! 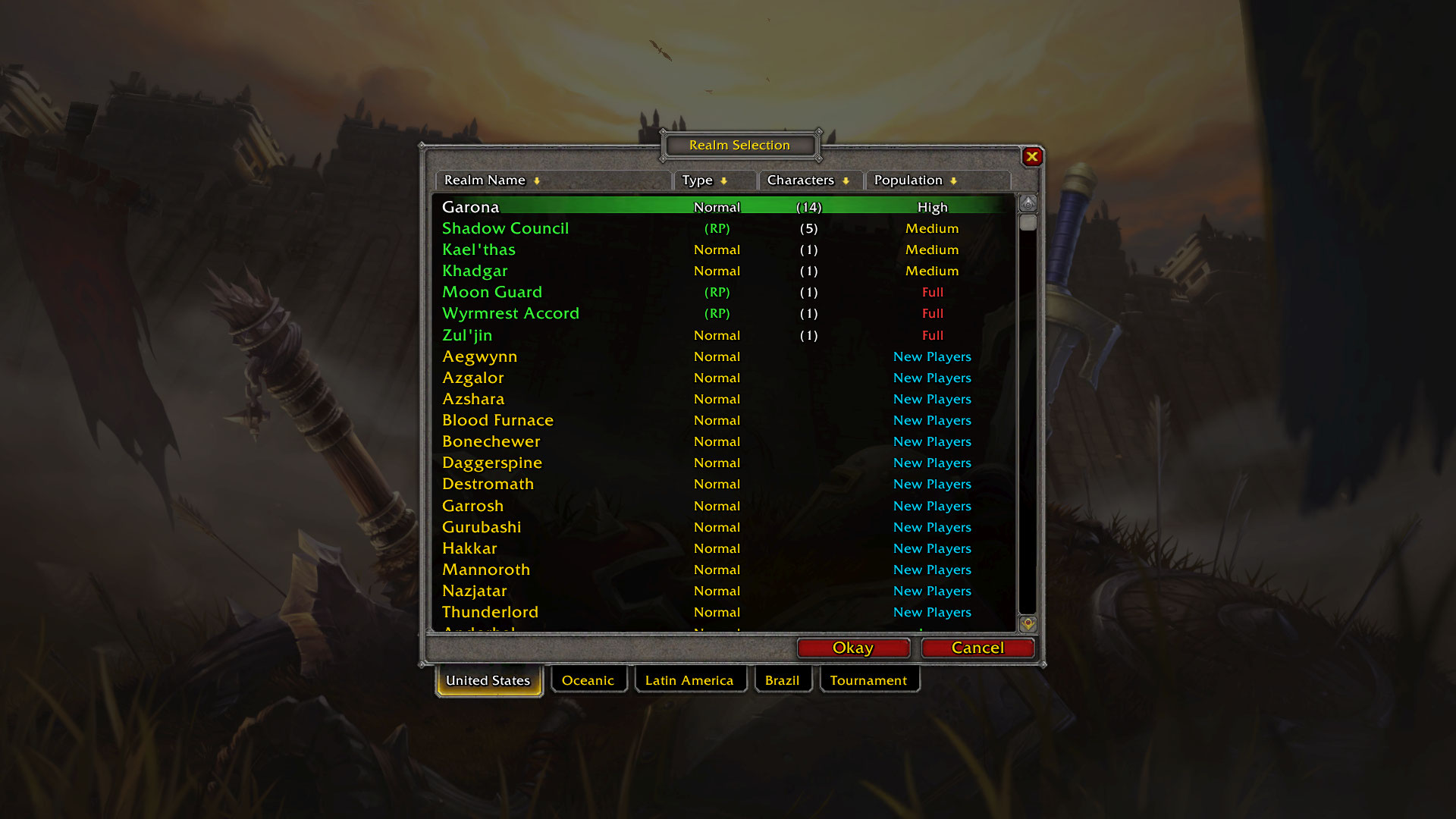 It doesn’t look like it, I wonder what’s up with them.

We had an unexpected issue connecting Andorhal, Scilla, Ursin, and Zuluhed to Eonar and Velen today. That connection was not made.

We’re planning to try those again next week. We will let you know an exact date and time for it, as soon as possible.

That’s great, happy for you and the other 20 people on that realm!

its clear that some realms are giving them more problems than others especially the ones that they delay for weeks.

I just don’t understand why they’re not getting better at this. Surely they are running scripts? Surely this far into the program, the scripts would be debugged? Surely the schemas don’t differ between the databases?

Maybe they just overschedule and cancel the ones where the scripts run too long?

If a flight is delayed for more than 1 1/2 hour to 2 hours, an airline would pass out drinks or food coupon to compensate you.

Hey, they let that political thread stay up to amuse us.

With 8 weeks missing at 5 successful connections per eu\us average like they’re doing, I doubt 40 connections overall will be enough to finish the program, and indeed, it took them a lot longer, like a year, for the first round of connections in mop.

There are 29 “new player” and “low” population servers, which would be a minimal set to merge. Some “medium” servers may be on the schedule, but there’s probably some flex there.

Keep in mind new players realms aren’t all in need for connections, blizzard wrongly shows them on top of the list if you order by increasing population, but the new players marker only means if people create a new account they are redirected to a new players realm for their region, it doesn’t tell you the population, and example the one including aegwynn US has a pretty good population.

I was under the impression they wanted to connect every single medium realm and make it high based on the aggressiveness of the connections on the 2 regions, it doesn’t look to me like they’re content with medium population, that’s why I think they’re behind schedule.

Connecting all the “medium” realms would be a bigger job, yes.

How many of these are already connected in some way? If you count by realm instead of by server, 32 realms in the NA region got new connections this week. That would still be enough to connect all the presently “medium” realms by 26 October with several weeks to spare.

If you count by server, I think only 10 servers got merged, but I’m not sure how many servers are outstanding.

Edit: I didn’t count all of them, but the 14 remaining RP realms are on only 6 servers now. If 10 servers get merged per week, and the proportion of realms to servers is the same for Normal “medium” realms as for RP “medium” realms, that would suggest that 20-25 realms can be connected per week, which could be done before 26 October but without much margin.

you have to see connected servers as single servers because they effectively are merged on the same server. The realm count is meaningless because the old realm servers just act as redirect links and nothing more, each connected server has a specific “Host” server. Most of the time this can be directly traced back to one of the servers in the cluster but there are a few servers that are hosted on nameless “virtual servers”.

Each realm has a unique server ID and that is shared among all connected realms in the same cluster regardless of how many redirects there are to that server from the realm list.

You’re way above my head but it seems to me that the name issue is what keeps servers from being fully integrated. Not sure how to overcome that. Any idea?

Blizzard has fully merged servers before, usually it resulted in the creation of a new server that serveral old servers had their characters copied over to and if there was a name conflict, the less played/newer character was forced to rename… This mostly has happened in Asian regions though, Blizzard never did this in the US.

We dont have ally to kill anymore in brazillian realm, our ally is leaving to STORMRAGE
#joinusblizzard

This is a good question, keep in mind this might not be precise cause I don’t have the updated realm list under my eyes, but judging by raider io’s numbers and the correlation in population that I’ve seen so far last I checked in the us realm list, there should only be like 40 english clusters that are high or full, rest should be medium or lower, so 60 english remaining servers are a lot, let’s say they can manage 7 connections a week for 8 weeks they could be up there, but it’s gonna be tight, if they continue having problems they will get a lot less done.

Because atm I think what’s making us get significantly different result is that I don’t know if you know there are around 100 remaining realm clusters in the US.

Looking at the balance and population of the Kirin Tor, Sentinels and Steamwheedle Cartel cluster, it seems like it would be a perfect match for the Lightninghoof, Maelstrom, The Venture Co, Ravenholdt, Twisting Nether cluster.

So I’m bored at 3am because this is what my life is like in a post-COVID world. I went and looked at all the numbers for the RP realms off of raider io then took a look at what datacenter each of those realms (or connected clusters) is on and I’m pretty sure you could connect all of the RP/RP-PvP realms together into two connected realm groups. Minus Emerald Dream, Moon Guard, and Wyrmrest Accord because they’re already decently sized.

I suck at formatting but here you go:

Why connect so many realms?
These realms are in dire need of help. I know you list them as “High” on the realm selection screen, but I see no way that could be true. The Lightninghoof/Maelstrom/etc. cluster is listed as “High” alongside realms like Hyjal or Kel’Thuzad. Those two servers are listed on raider io as having 76k+ and 90k+ characters on them, respectively. By comparison the MaelHoof Co cluster is listed at 40k+.

Another metric worth looking at is how many guilds are progressing through Heroic and Mythic raid content. Kel’Thuzad has 64 guilds that stopped progressing at 12/12H this current tier and 7 guilds that managed to clear all the way through 12/12M and get Cutting Edge. Additionally they have 32 guilds that have killed at least some number of Mythic bosses without getting to 12/12M. Let’s compare that to Lightninghoof/Maelstrom/Ravenholdt/etc. They have 24 guilds that managed to get to 12/12H. Slightly lower numbers in proportion but not drastically so. Until you look at their Mythic progression. They have 9 guilds working their way through Mythic Ny’alotha. The furthest progressed are at 5/12M which is about where the easily puggable bosses end (I’m sure arguments could be made about which bosses are puggable at this point but that’s another topic). That is a huge drop off in numbers. Server clusters this small cannot sustain progression raiding.

Ok nerd this is a lot of words about dead servers.
I will fully admit that there may be some bias here, I played on Maelstrom from April 2008 until, well, now. I still have characters there but none of them have set foot in a raid instance since Battle of Dazar’lor because the server cluster is essentially dead. I hate it. I have over a decade of memories on that realm. I have about a dozen characters between 110 and 120 there (I just checked and it’s exactly a dozen) across both factions. 85% of the friends I’ve made playing WoW played there at some point. The other 15% are people I’ve met since I finally gave up on Maelstrom and moved characters to other realms that still had life in them (Hyjal, Proudmoore, Mal’Ganis, Wyrmrest Accord, etc.). I want Maelstrom to be alive again. Partially so I don’t have to drop hundreds of dollars moving my characters, partially so I can trick my friends who quit during WoD/Legion/BfA into coming back and raiding with me in Shadowlands. Let’s make it happen, Blizzard.