The soulfire buff makes it even more stronger. This is awesome. Its good to have another strong damage spell other than chaosbolt.

This isnt a band aid. This is a good compromise. Warlocks dont need a counterspell when they have a felhunter… stop trying to homogenize this class.

Rain of chaos is a cool spell

Exactly. A compromise. We shouldnt need to compromise, we should be stronger! I dont find it unreasonable that warlocks, especially if they keep 6 sec pet summons, have a baseline interrupt. Why are we left out if only for flavor? It is as simple as haveing grim: felhunter as baseline (maybe double the current CD?) and have the felpup make that cooldown x2 as fast.

Ill accept the interrupt, but i will not compromise. I AM A WARLOCK. I am tired of not getting things or getting them taken away, or given to me with stupid restrictions.

its a bandaid solution that is functional but still has problems. get out with this homogenization stuff, that stopped being the case when situations demanded multiple short CD interrupts which demo flat out did not have AT ALL while being able to do its standard damage and use 2 talents we are guaranteed to be specced into. the idea wasnt to give warlock 2 kicks. it was to give it one baseline and have felhunter purge be command demon as a tradeoff. that way demo could interrupt without A - a 6 second cast prior to the event and B - losing 2 significant talents and a chunk of baseline damage.

Reminder what the most articulated interrupt solutions were:

This will be expanded upon in Demonology but the summary of the four solutions apparent to the community are:

Imo warlocks just need a united message going to devs that a baseline interrupt is the correct fix.

The alternative solutions will always have issues in different areas of gameplay that no other classes have to deal with.

8 secs for each imp sounds great. 9 Imps is 72 seconds. Needs to be cast much less often

Oh please no. Do not bring back explosive potential. Just let it die in the expansion abyss.

All the other things sound awesome though. Props to those of you providing feedback.

I doubt the duration is additive. It’s probably x * 5% haste for 8 seconds.

So just to note, Axe Toss was confirmed to NOT be an interrupt in a traditional sense, it will only interrupt things that are stun immune.

This doesn’t change that Demo still won’t have a viable one for trash, ultimately still enforcing the idea that we synergize only well with Prot Paladins and will run with double melee just because of that weakeness. Even if it were buffed to also trigger spell school lockouts when it’s on non-stun immune it still has it’s issues such as

-Can not be used to get mobs out of stuff (IE Sanguine weeks)
-Can not be cast while Felstorm or Demonic Strength is active
-Messes with M+ trash stun DR’s
-Has travel time, not not effective for far side caster or spawned caster
-On a 30second cooldown, does not line up with other interrupt rotations

This is like a fix that will effect very little things in practice. If you look at live, it will help us in Shrine of the Storm for the 3 bosses which is good. However, because it’s still an extremely interrupt heavy dungeon as a whole and almost every pull has 2-3 interrupts needed with 1-2 nice to interrupt spells, it still doesn’t make Demo that much more of a boon outside of Tyrannical weeks.

For raids, it’s not going to be used on trash because it can’t be and for raid bosses most people run with 1-2 demon hunters anyway and they get additional resources for hitting their interrupt. I actually see more uses of Axe Toss being used for the ST stun than it being used for the interrupt just because the stun is more useful on adds, like we’d never try to interrupt an outside caster add to bring it on Vexiona, but we’d still opt to throw a stun on it when it’s already centered.

I still think Warlocks should get a baseline interrupt separated from the pets. Demo gets a stun as a trade off for not having an offensive dispel.

Those destruction legendaries are making me SALIVATE. We essentially get our full T19 set bonus… STOKED!!!

DEMONOLOGY WARLOCKS HAVE AN INTERRUPT I REPEAT WE HAVE INTERRUPT, Axe Toss will now interrupt in Shadowlands

I’m really glad they listened to the feedback, however I still wish they’d consider making it a baseline spell for the whole class.

They took a utility spell from hunter pets to give them tranquilizing shot baseline, no reason they can’t take spell lock off the felhunter and make it a baseline ability for all 3 specs.

Demo locks will now always have access to an interrupt, no matter what they’re doing, while aff/destro won’t whenever they’re using a voidwalker (which is pretty much any time they aren’t in a dungeon… not looking forward to Torghast with no interrupt).

I’m not trying to sound ungrateful, because after all, they DID hear the feedback and made a great change… I just wish we had a baseline interrupt like every other dps.

Do you mind if I just copy and paste all of this into my compilation feedback thread original post in a quote? 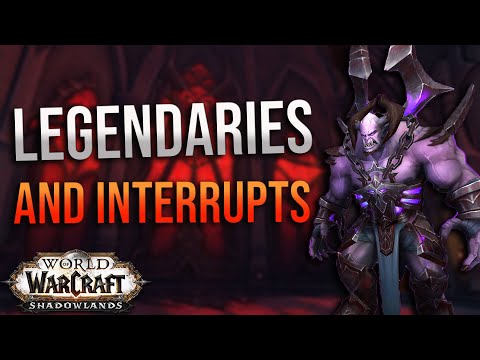 so for affliction they just buffed agony?.. really?

edit: affliction does not need or want shadowbolt. why are they still forcing it on us

Go for it. Either is fine

Do you mind if I just copy and paste all of this into my compilation feedback thread original post in a quote?

A fell hunter that kills your dps if you want to use it. Stop talking about classes you know nothing about.

its true I seen sephuz in the creation as well. I think they are bringing back legion legendaries. If they do that thry should allow us to forge thunderfury amd sulfuras in sl but yea interrupt will probably be the last thing they do for demo. In the beta they focused primarily on content to fish iut the bugs before release

I just don’t understand this aversion to letting Warlocks (Demonology in particular) have a baseline interrupt. The Axe Toss change is turning to face the right direction, but not enough to call it a step in the right direction in my opinion. It’s beyond flavour at this point, Blizzard. It’s just annoying and in many cases punishing not to have one, even in some solo content. And the salt in the wound is that we don’t understand the logic of it. Could you at least tell us why you feel that Warlocks should be either effectively devoid of an interrupt or have it attached to our pets?

I don’t want this to sound negative and whiny, but I think it’s as important to express when something about gameplay feels punishing or aggravating as it is to say when things feel rewarding and fun. By and large, the previews and things that we’ve seen for Warlocks has me very excited for the new expansion, but the interrupt thing is a sticking point that leaves an increasingly bad taste in my mouth.

I also don’t understand why the interrupt that we do have has to be attached to a pet. Interrupts are incredibly valuable when needed, and while it has a 40 yard range, attaching it to a pet means that it’s subject to that pet being within that 40 yard range AND Line of Sight. While this usually isn’t a problem, I’m sure we can all attest to times when your pet was on a target elsewhere unbeknownst to you and then has to run into range. This also means that you can instruct it to interrupt, causing to run toward your target and only cast once it’s in range by which time the spell to be interrupted has long gone off. I know that this is something a good Warlock should be in control of, but accidents happen, and the bigger point is that it’s an extra hassle that no other class really has to deal with.

The other major problem with having an interrupt attached to a pet is that it means that the interrupt is subject to that pet’s GCD. I’ve had many times where I’ve had my Felhunter out and within range, but because some other ability had gone off, the interrupt fails to cast. Or worse, the interrupt misses the window and casts as the next spell cast, missing the interrupt AND taking my cooldown.

Both this and the range issue are sometimes a problem in PvE, but are extremely prominent in PvP situations. Interrupts just require far too tight of a window to accurately rely on pets for an interrupt.

The last problem I have with the interrupt being the Felhunter calling card is that it is by far more valuable than any of the other command demon abilities. Why not focus on the offensive purge? That would bring it more in line with the value of a defensive purge, a taunt, and a humanoid-only channeled CC. Currently, as Affliction or Destruction, you either use the Felhunter if you need the interrupt or the Imp if you don’t because of the benefit of ranged damage. The Succubus sees no use anymore, even in PvP where it is supposed to shine, because sacrificing that interrupt is just too punishing.

My suggestion would be this: Warlocks get a baseline interrupt that is part of the Warlock toolkit, not the pet toolkit. This could manifest in a variety of ways. For example, rework Curse of Tongues to operate as an interrupt rather than a cast time increase. Introduce a new Curse of Tongue-tying or something that is a proper interrupt. You could even make this change based on specialization. For example, if you’re Demonology spec, you get call Felhunter. If you’re Affliction or Destruction, you get Curse of Tongue-tying. Both of these options retain the flavour of the specs without sacrificing an integral ability.

Please, do not keep interrupts out of our kits or with our pets. It actually works against class fantasy and class freedoms in my opinion. If you are intent on doing that, please, at least explain your reasoning.

Edit: a couple words for clarity.