If you don’t have 2/4 piece by Tuesday

Its really so people can complete the look that arent raiding.

I would then also say it’s to give people a little more agency over their secondary stat distribution.

Especially for those of us who enjoy playing multiple specs.

Because there is a tier set for the look?

How does this work with 4 transmog sets? I assume there’s ilvl cutoffs for each one?

Crafted covenant legendary on my chest and other legendary on shoulder for prot under the impression I could turn the 278 leech waist and wrists I got from vault into tier, guess I’m not tanking M+ this season lmao.

under the impression I could turn the 278 leech waist and wrists I got from vault into tier,

You can turn it into tier. It’s just not tier that gives you a bonus. It’s a new thing.

I’m confused. How is it a trap? Do people not look to see what pieces have tier bonuses on them?

It is very unintuitive that a system designed to create tier allows non-tier slots as input.

I shouldn’t have to look up what is valid. There is such a thing as UX design.

Last time I checked, tier has never had set bonuses on belt, bracers or boots since Vanilla.

TBC had tier belt, boots, and bracers if memory serves from Sunwell.

I shouldn’t have to look up what is valid.

… you can’t be serious. There’s literally nothing to look up. The Catalyst specifically shows you. 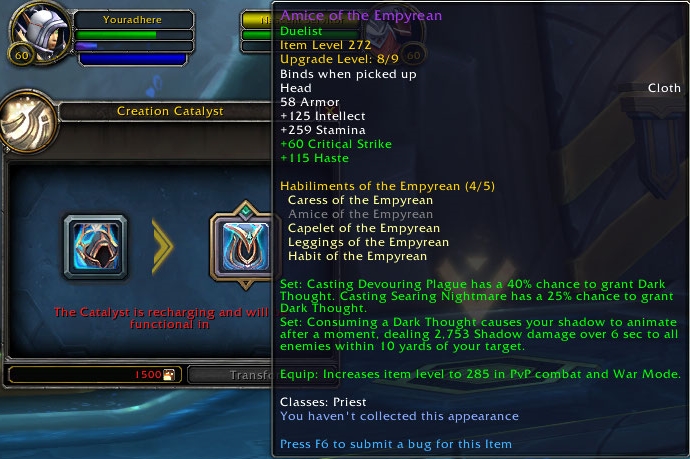 The Creation Catalyst is Coming the Week of April 12

Note that the 2-piece and 4-piece set bonuses will only be on the helms, shoulders, chests, gloves, and legs.

The Creation Catalyst is Coming the Week of April 12

I need to mute this thread. I can’t headdesk over this anymore.

… you can’t be serious. There’s literally nothing to look up. The Catalyst specifically shows you.

Then why even allow a non-tier piece as input.

When you design ui’s/applications one of the first things you should validate for is bad input. That is literally like programming and ux 101.

We can agree to disagree whether or not it is a big deal, but it is literally the first thing you should check for.

If you stick bracers in there - will the text tell you that “this is for mog purposes only” or “will not apply tier set bonus”.

Then why even allow a non-tier piece as input.

this is a big problem blizzard should be addressing if you cant get the tier set bonuses from the smaller pieces you shouldnt be allowed to put them in the catalyst.

more like its a big screw job by blizzard imo.

If that happens, then I’ve lost all faith in this world’s education system.

You realize that the “most watched news channel” in America, has openly admitted to being nothing but an entertainment channel, and that “any rational person realizes that the shows ARE NOT NEWS, and no one should take its hosts seriously.”

At least, according to the judge when they were sued.

(this fact has nothing to do with the faults of other mass media. How people immediately jump on this dead horse is also a leading indicator of our failed schools)

Can you even place a piece of other gear into the Catalyst? Doesnt it only accept items it can transform?

No, its not. The set bonus is on specific pieces and have been since TBC. They shouldnt have to tell people “hey, the set bonus is still on the same pieces that they have been on for over 13 years now”.

Its like ordering Iced Coffee and being shocked there is ice in it.

more like its a big screw job by blizzard imo

They definitely didn’t have to make it this difficult. They also could have worded things a lot better.

More like being given coffee in a coca cola cup.

Most people will figure it out, but why even allow for the confusion in the first place?

Hmm, the only stuff available to me for upgrade are the 246 items sold by Rafiq, which are all bad stats for me, or much lower item levels than I already have. I don’t think adding tier bonuses to these will make them any better than the 252 gear I already have.

I have nothing else to say but the people that are confused are dumb. Blizzard laid out all the information that you would need. If you dont understand that they said you can only get the set bonus from the helm, shoulders, chest, gloves and legs then you are just dumb.

Period. Go sue your elementary school because they failed you.

More like being given coffee in a coca cola cup.

Most people will figure it out, but why even allow for the confusion in the first place?

Bingo. They should have never called the other pieces tier and they shouldn’t have synced up the names.

Then dont get them, but you should go read the post instead of making baseless assumptions that were answered in the post.