How does Blizz deal with bots?

Wait till the server economy is taking huge hits then check up on all the reports of bots and bring out the ban hammer.

Botter’s, and now multi-botter’s, have been a problem in this game since it began. Since this problem has persisted, my opinion is that there is no way to stop them - only slow them down. I imagine Blizzard spends a lot of money just spinning their wheels trying to stop these people.

With that said, as others have commented, all we the players can do it to report them ONCE and move along. My theory is why you’re seeing the multi-botters outside of dungeon entrances is because of the last band wave, now they’re using dungeons to raise a new squad of lvl 120 druids, hunters, and warriors - or, perhaps they’re selling level 120 character to players? I have no idea their motivation.

I’m curious because for the past several weeks I’ve seen the same druids outside instances I farm for raw gold. Always in the same spot, never reply to whispers, immediately go invis when I whisper, and always on. I’ve filed many reports and as its been weeks now, I’m starting to suspect that reporting is a waste of my time.

I never respond to whispers when I’m multiboxing. If you aren’t on my friends list and I don’t know you, then I’m not wasting my time talking to you.

I multibox Druid teams all the time and stick to certain dungeons or farming spots for herbs and raw gold. I never respond to spam whispers.

I do laugh when someone whispers to me threatening to report me.

Report me for what, multiboxing? Go ahead, they’ll never ban me for multiboxing.

This isn’t a thing. Stop trying to make it a thing. You’re either botting or you’re not.

Blizz wants their sub money, so they ‘study’ the bots for 2 years or so, and when blizz needs a quarterly report boost, they ‘ban’ all of the bots, knowing full well that they will purchase new accounts and subs.

Rinse and repeat. That is how Blizz deals with them.

but its the combination of behaviors that make it suspicious. The players I’m referring to are players who aren’t only camping the same instance coincidentally every time I’m there, they are also sitting in the exact same spot, making the exact same movements and immediately going invisible when I whisper them (to hide their portrait and avoid getting reported.)

I’d be naive to think a real human player could check all those boxes.

In regards to harassment, the whispers I’m sending are along the lines of “Hello, are you a bot?”, which from what I understand isn’t harassment unless they replied asking me to stop whispering them . If they ever replied and said something like “please stop whispering me” and I continue, then it could be seen as harassment, but even that response would relieve my suspicions of them being a bot.

Lastly, I have done what you advised, my first report was filed back in June, but this post is questioning why several weeks later I am still seeing them, since in that time they have already made their gold.

The intention of the post was to better understand what Blizzard’s actions are.
I’m glad to hear Blizz takes the time to monitor the botters as other posts have mentioned to create more efficient solutions to botting, instead of banning each player individually, which wont solve the botting issue as a whole.

Basically I’m just looking for someone who is more knowledgeable then myself on the subject to explain to me “they can’t just ban people because of reasons x,y,z”, so I not concerned thats Blizz is turning a blind eye to botters.

But some multi-boxers are botting as well so multi-botting is a thing.

They do a ban wave occasionally to make it seem like they do more than they do and botters just run more bots. If anything they catch the casual idiot who bots on his main account like a fool and while that is amusing, it does very little to stop the rampant botting and absolutely nothing to stop multiboxing which is somehow more legitimate than botting because of reasons. Blizzard makes money off both of them and they both ruin economies and annoy people the same but it’s different somehow.

Hey guys, to keep things on track I just wanted to share what inspired this thread. 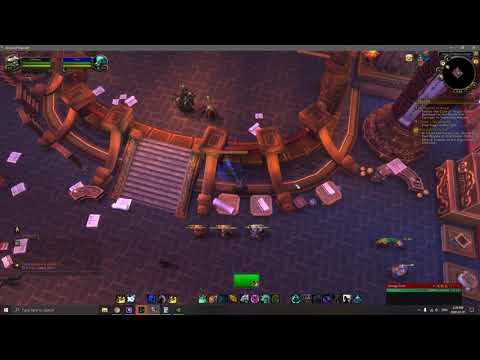 This is an example of one of the individuals I reported back in June. I believe I was able to disrupt the bots script with a group invite, causing it to think it was currently in the instance and running its usual path.

We’ve recently completed a round of actions against players who were found to be cheating in World of Warcraft. We rarely communicate publicly about this, because we’ve found that describing our sources and methods can make it easier for malicious actors to work around them, but we feel that it’s worthwhile to expand on the subject today, as many players have recently asked us for more details. Including today’s actions, over the last month in the Americas, Oceania, and Europe regions, we’ve c…

This thread goes into some detail about what they do.

Edit: Be aware that posting videos like that on the forum is against the forum ToS for callouts and/or self promotion, it could possibly result in action against you. Just a friendly heads up.

I went back to try and better illustrate why I suspect some of these players as bots.

After finding one the players who was in question in regards to your reply, this was a player I was referring to.

I suspect I was able to throw the bot off its script, demonstrating how this bot currently thinks its in the instance right now, running its normal path.

Since my first report back in June, this bot has most likely already generated well over 1mill gold for its developer.

Always in the same spot, never reply to whispers,

that doesnt mean a thing.
I dont even see whispers most of the time till some time later. And even then I dont respond to them much. MY game is MY time…
As for being in the same place…so what?
I use the loot a rang to loot with…so Im basically standing in one spot for a long while sunfiring mobs down and ranging the loot.
The reason you arent getting anything done is because its probably players who are obeying the ToS.
yeah…you may not like it, but the rules are the rules.

Report and move along. Thats really your only option here.

All that work for nothing, apparently…as I said…

Report and move along. Thats really your only option here.

I aint the one you need to impress.

But some multi-boxers are botting as well so multi-botting is a thing.

I dont think anyone argues that that doesnt happen but MOST of the time in here the ‘multibot’ crap is the inflammatory accusation against ALL boxers.
So we just come to expect that that is the intent when the term is used.

Blizz wants their sub money, so they ‘study’ the bots for 2 years or so, and when blizz needs a quarterly report boost, they ‘ban’ all of the bots, knowing full well that they will purchase new accounts and subs.

Rinse and repeat. That is how Blizz deals with them.

If they want in bad enough, the get in.
Thats why even government websites with top notch security get hacked.
There is no stopping it. Just trying to keep it controlled to whatever degree.

You are correct, it is not, and I never said that they are one in the same. However, what players have see lately (I’ve seen it personally MANY times in the game) are people who are multi boxing AND using a BOT to drive their 5-10 character at the same time. That is what the OP was talking about when he said

I’m curious because for the past several weeks I’ve seen the same druids outside instances I farm for raw gold. Always in the same spot, never reply to whispers, immediately go invis when I whisper, and always on.

I believe he is describing multiple BOT’s - multi-botter. What name would YOU give this kind of activity?