Which would/will you choose to play and why?

Evoker only cause Blizzard will actually care about the tuning and trees of that class compared to Druid. Plus Evoker will be good and people will be looking for one for the entirety of DF like DH in legion.

Gotta go with resto/boomie. I’ve tried evoker on the beta but truth be told I’ve found their tank spec to be just a little bit lacking.

Evoker will undoubtedly be allowed to run rampant for a fair while just like the other new class additions. Plan to fully enjoy that.

But I can’t just leave my drood behind, too good at everything to shelf. That and we have a lot of history (ie: reps, achievements etc…)

Thats exactly how I feel!! My problem is I don’t have access to beta so I don’t know how I will like this “mid range” caster style?.. Plus I’m a transmog fool so it bums me out that they can’t wear armor.

About as lacking as their melee spec imho.

Yeah, as a collector that’s an issue for me too.

I guess mine will only be used for pew pew and class/race only achievements.

Evoker looks awful imo, dragon race looks ugly as heck and the class itself the rotation looks boring and uninspired, splitting AOE and Single target abilities up meaning depending on the Fight (aoe or single) you dont use half your spells. Not only that there is no real hook and you just get tunneled down by melee just like Mistweaver does, but far worse.

Druid is far better in every way in my opinion. Pin head lizard race are so ugly on top of the rotation feels boring. I think with the reception the new race\class received in comparison to DH\DK on announcement its night and day how poorly it was received on announcement compared to other classes. I think it was a failure imo

On top of that its got short range while its mobility is going to be good in raids but useless in PVP as moving while casting will mean that melee will still be able to keep uptime at 100% and you have no range with no extra benefit over casters that have max range.

Watch this video if you think the single target rotation is even interesting. 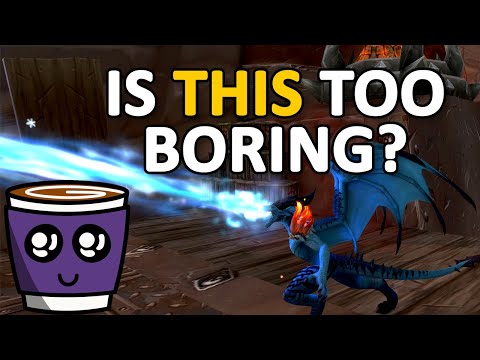 Evoker will undoubtedly be allowed to run rampant for a fair while just like the other new class additions. Plan to fully enjoy that.

Current beta class tuning suggest otherwise in that running rampant. They aren’t even close to the top. Poor dragon friends aren’t even topping meters in their own expansion.

Though, I highly doubt they will let the star of the xpac rot come live.

Would be funny to see, not gonna lie.

Considering druid healer is more mobile than this new “mobile healer/caster”. I’d rather stay on druid

After getting invited to beta and testing I’m staying with my druid. They gave the dragons a lot of bells and whistles but almost half will not be used most fights. Also happy to see Mark come back for druids now if only we Worgen could get some love this would be a rather nice expansion.

Im already so confused I cant be adding transdragon into that.