So- I’ve been doing a lot of digging. The one tweet that was the nail in the coffin posted by Loreology is gone. The only quest text we have is from Senegos a recluse as far as other dragons go he basically hung out in Aszuna all his life. When he says

We need help.
Since the fall of Deathwing, we dragons have lost nearly all of our power. To make matters worse, we can no longer bear eggs.
My whelplings are the last of the last.
I need you, champion. Help defend my whelplands, and I swear to you, the blues will be at your side when you need them.

Is it possible for a definitive blue answer on this one? We have to assume with Loreology’s nuked twitter they no longer speak for story anymore. Could we get some form of elaboration on Senegos’ meaning?

I’ve dug pretty thoroughly, the post in its entirety has been lost, I used Wayback Machine and a wiki piece of some saved old tweets, the general idea through context clues was simply, “Dragons are infertile.” Wording seems to have been lost.

I’m not sure if I can share links here (Not really used the new forums) but here it is. 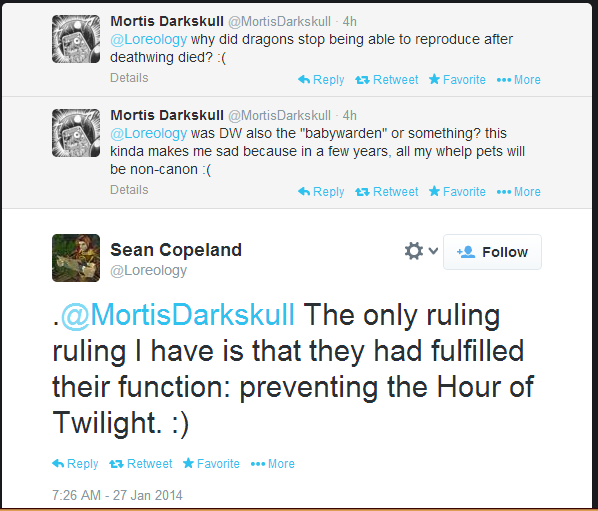 Apparently, I found it.

None of the dragons can lay eggs right now but I have never been too worried about them. After “A prophet’s lesson” I am pretty sure they will find a way to solve their population crisis.

Dragons swooped and soared in formations that made the sky resemble a giant multicolored, reptilian wing. They blanketed the horizon with their physical size and numbers, and when they roared a challenge, it shook not just the earth Velen stood on, but the universe as well.
And yet, for all this, the greatest shock to Velen’s senses came as he saw those that flew just beyond the army of dragons. The naaru had taken the field, so many that Velen didn’t understand how creation could contain them. The power of these beings of Light filled Velen’s heart with hope, swept away the lonely centuries, and left him in wonder that he could ever despair, that the dark, no matter how terrible, could ever truly reign.
And then a shadow fell.
It was vast and empty and swallowed all light that entered it. Velen knew it would be all consuming until, at last, it would turn and devour itself, endlessly gnawing on nothing in the Great Dark Beyond, removing all meaning from the universe, from the most heart-breaking sonata to the most arresting sunset. It was too terrible to see, to comprehend, and yet the army headed straight for it. And the light began to fade…

Thank you for that. I don’t think it fully answers my question; but, it’s a good start. Still would like to see a blue post on the topic.

Is it possible for a definitive blue answer on this one? We have to assume with Loreology’s nuked twitter they no longer speak for story anymore. Could we get some form of elaboration on Senegos’ meaning?

The red dragon eggs were destroyed when Krasus was killed. The black dragons are all but extinct, and the Greens only exist in the Emerald Dream so the blue whelps may be all that’s left of true dragonkind children.

Norzdormu and Soridormi are still consorts; there are infinite whelps being born, if Infinite Flight and the Bronze Flight are looking in a mirror at each other we could presume that Bronze are still producing babies.

I think the question I’m more trying to find out out, are all dragons capable of breeding. We know that Rhea was breeding, we know that Onyxia was breeding. There are male and female dragons of all flights have they lost the ability to breed? Or is it just the Aspects?

The Prophet’s vision is pretty impressive to say dragons can still reproduce.

Hopefully the issue gets fixed. Part of Warcraft’s appeal is the high-fantasy theme, and the lackluster attempt to empower this “age of mortals” struck me like a cringey participation trophy.

The Prophet’s vision is pretty impressive to say dragons can still reproduce.

Correction, they cannot reproduce NOW. That is just the current state of affairs. However, Velen’s vision shows they MIGHT likely get back their ability to breed/solve their population problem. The how and when is the question.

Hopefully the issue gets fixed. Part of Warcraft’s appeal is the high-fantasy theme, and the lackluster attempt to empower this “age of mortals” struck me like a cringey participation trophy.

I like the state of affairs in the sense that the dragons are facing a huge problem and it shaping their views of the world. A certain grimdark is nice especially for a creature that is pretty much one of the most powerful forces of good in Azeroth.

Back in the day Dragons in WoW were like “Omgosh dragons!” now days, they’re kinda seeming like plebs and are push-overs, especially for the mortals.

“The Age of Mortals, has begun!” - Alexstrasza, Queen of the Red Dragonflight.

Personally I think the whole ‘Make everyone mortal & equally, just as weak’ is a boring concept to play.

I liked when many beings including Dragons were immortal, powerful creatures - many akin to extreme nobility; along with beings that could eternally be reborn & remade despite where or how they were destroyed, having to manage a way to destroy the form then imprison the new ones made. Personally I feel it made the game immersive, dangerous and like you were the underdog that could strive through against all odds and come across threats that wanted shear vengeance for befalling them in the past.

I think the issue is Senegos was unclear, “We” could mean any number of things.

Lore’s twitter was nuked, the tweet was mostly lost, save for screencaps, can we consider that cannon anymore? A blue post on the lore would be great.

Back in the day Dragons in WoW were like “Omgosh dragons!” now days, they’re kinda seeming like plebs and are push-overs, especially for the mortals.

As a dragonscale leatherworker, I have to accept my share of the blame.

Personally I think the whole ‘Make everyone mortal & equally, just as weak’ is a boring concept to play.

“When no one’s super, everyone is”?

Regardless, clarity of this thing would still be great. We just need a blue to say what Senegos meant by “we”.

As long as they don’t do a forced mating thing again. the secret is in Alexstrasza

All dragons should be deleted from warcraft. Permanently.