The interface updates coming in 10.0 are largely focused on improving how the game provides information to players, but we agree that in the future something like a “ping system” would be great for enhancing communication and would be very much worth exploring.

I found that post very insightful and there’s a lot of great suggestions there, beyond just the key highlights of WoW’s encounter design and the impact on groups who require additional accessibility functions. However, given the Blue response to this, I think this one is maybe flying under the radar a little bit and should be given further consideration. The importance of the ability to communicate effectively with your team in the presence of language barriers or lack of access to voice communications should not be downplayed here.

Perhaps instead of the entire feature being deferred, an iterative approach could be useful? Having access to simple functions such as “move here” and “watch out” on a 3D ping system would go a long way towards enabling groups. Even just those two would be a great addition and more functionality can be added later.

I have no idea what they mean by a ping system.

You would put your mouse over a part of the world, hold a button, and a menu would pop out. You would pick a selection like “move here” or “look out”, or other things such as “thank you” or “have a great day”. These would show up on everybody’s chat/screen and be translated to whatever language their game was set to.

Think of how the minimap ping works, but in the world and with more descriptive information that the user can pick

You can do it multiple ways, e.g. one common method by having it activate off a hotkey to choose among pre-determined messages (for stuff like “Hero!” or “Need CC”) since those are just quicker communication.

You could make it positioning/map based to create a position-based ping off the location (for stuff like “Stack here!”) - think world markers but more informational rather than just a random colour.

You could theoretically also create one off of specific unit frames like the target/focus frame, for stuff like “Keep this one interrupted”, or “Kill this one”.

You could create an interaction with a ping hotkey and abilities/buffs to quickly broadcast stuff like “Tranq on cd for 17 secs”, or “Shield Wall is up for 5 more seconds”. Unrelated, but they also really could just automate broadcast for certain spell effects if the player chooses to, e.g. have a predetermined message to go out when you use Rebuke to interrupt a mob, or you’ve cast Taunt on a mob, etc. That wouldn’t be a ping system, but it could work pretty well in conjunction with a ping system for quick communication.

In theory, if they’re going off ideas for encounters, they could create boss-encounter specific pings, to communicate something specific to that fight while you’re in that fight, or doing something specific like in a certain phase, or in a vehicle, e.g. “Front left”, or a collection of symbols like “Blue-Red-Yellow” in varying orders/configurations (think something like Hylbrande or Mekkatorque or Lords of Dread with what’s currently weakaura-outputs baked into a set of ping options to speed up communication). That could be its own special hotkey, or activated through Extra ACtion Button or something like that to separate it from “normal” pings.

I think deciding what a good ping system is, and how useful it can be, is a relatively complex discussion that probably does need the 10.0 testing envs to really get good feedback or iteration on.

An example of one. 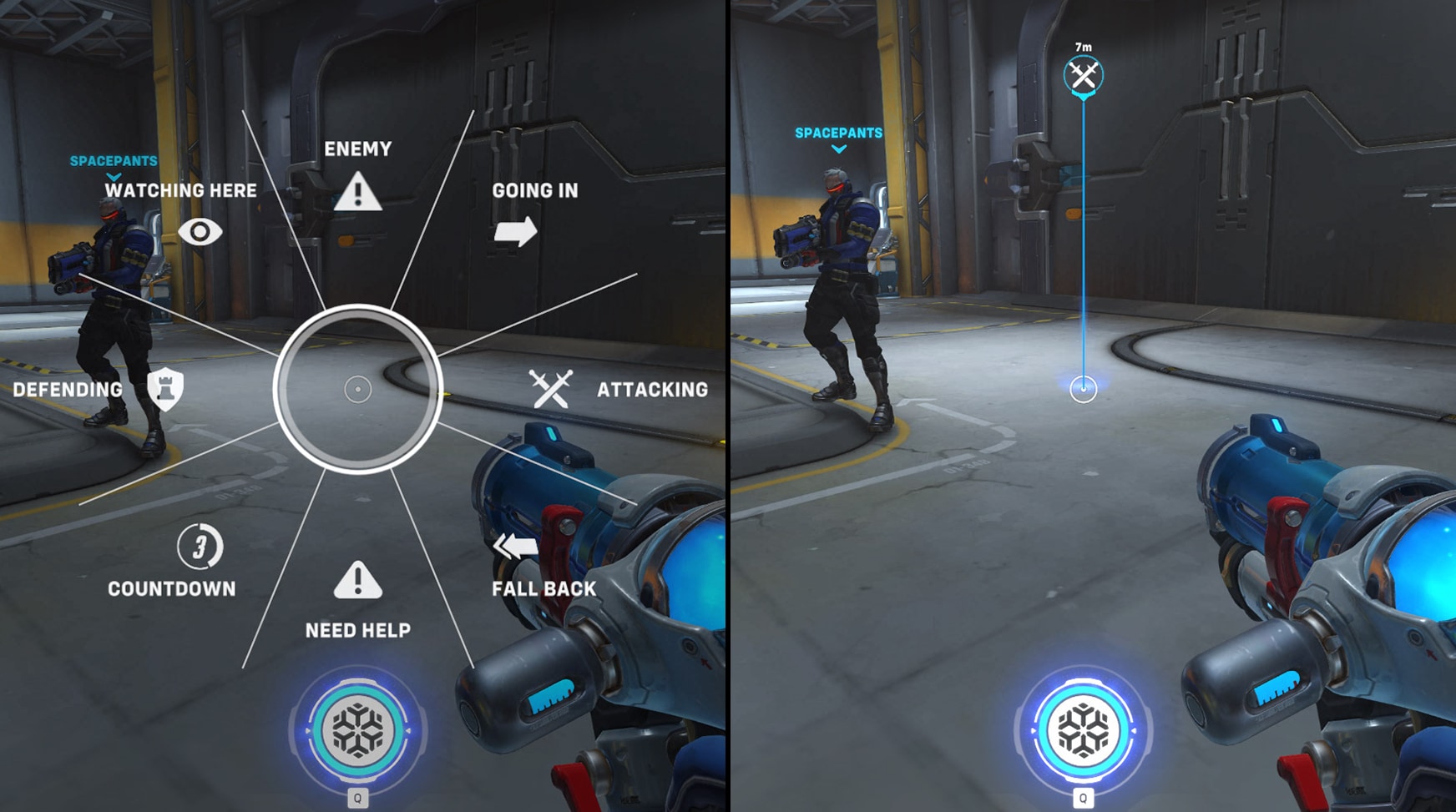 I think deciding what a good ping system is, and how useful it can be, is a relatively complex discussion that probably does need the 10.0 testing envs to really get good feedback or iteration on.

I completely agree that the design of these types of systems warrants attention and care. However, I’m also saying it doesn’t have to start as a completely perfect and complete feature.

It’s ok to ship a rudimentary system that doesn’t achieve all requirements and iterate on it from there. It doesn’t have to be all or nothing and it’s ok to pivot on design choices throughout that iteration process. If all we got was a copy/paste of the overwatch system, for example, to put something in the game while the devs worked on a better solution, that would still go a long way towards facilitating communication between many pugs.

I completely agree that the design of these types of systems warrants attention and care. However, I’m also saying it doesn’t have to start as a completely perfect and complete feature.

Any system in its first iteration is going to be far from complete or perfect. 10.0 isn’t likely to implement a perfect system either. But it IS going to take a lot of feedback to iron out what’s useful and what’s not, any bugs to deal with, even to get that imperfect system, and I have no idea if there are actual technical limitations for how to implement any specific parts into WoW.

It’s not like a hurriedly-rushed one is risk-free either. A bad implementation could end up spammy, hard to use in the middle of combat, or be completely inaccessible to anyone with disabilities/suboptimal hardware.

That’s not really true for most software teams tbh. Unless it’s something extremely simple (like, can be done by a junior within a few hours), even workable PoCs can be the result of days of work from multiple people, aka Thousands of Dollars. Pivoting on all that is almost never going to happen. This is one of the reasons they tend to be unwilling to revert back on extremely obvious bad changes in the PTR/Beta process.

And of course, it can often come down to what other feature is competing for attention/may be sacrificed due to time spent on this one.

10.0 isn’t likely to implement a perfect system either.

Per the quote above, 10.0 currently isn’t slated to ship anything, which is why I wanted to make this thread. I want to call attention to this and that it’s maybe more important than originally thought, even for players with no hearing deficiencies. I’m advocating that something come in 10.0 (even 9.3 if possible) over nothing.

That’s not really true for most software teams tbh.

As humans, we like to tell ourselves this. Not just for software but for pretty much every aspect of life. It’s so common we’ve labeled it the Sunk Cost Fallacy. It’s ok to recognize that something isn’t working and change direction. WoW has done this a lot in 9.x… maybe not as quickly as some of us may like, but they’ve shown that they’re willing to acknowledge when something isn’t working and take action on it. This is good!

Learning to course correct and pivot on a feature is a core part of agile software development, but even past that my intent here isn’t to tell Blizzard how to manage their business. It’s more to say, “I, as a paying customer, will give Blizzard my patience and support while you develop a system like this. It doesn’t have to be perfect and I will be happy to see it evolve over time.”

I’m sure the folks who would really love a feature like this will find that a reasonable statement.

Per the quote above, 10.0 currently isn’t slated to ship anything, which is why I wanted to make this thread.

No, I understand, what I’m getting at is even if it comes in 10.0 at the earliest, which will be many months away, it’s unlikely that it’s going to take longer/be a lower priority because they’re aiming for “perfection”.

It’s so common we’ve labeled it the Sunk Cost Fallacy. It’s ok to recognize that something isn’t working and change direction.
…
Learning to course correct and pivot on a feature is a core part of agile software development, but even past that my intent here isn’t to tell Blizzard how to manage their business.

Sunk cost isn’t what applies here so much. It’s the idea of rushing something that you’re not going to carry forward. AGILE only gets you so far; if you’re committing to Sprints delivering features you know you’re likely to rip out or revamp (at the cost of features you will retain), you’re not doing AGILE, you’re just doing bad project management and wasting $$.

And that’s assuming they even use AGILE. It’s not for everybody, and plenty of companies do it poorly.

In the case of features that are bad but remain, it’s not sunk cost, it’s the idea that taking them out to replace them with something else might 1) cost too much, 2) not deliver what you want anyway. If you gut, say, Legendaries, you then need to re-do the time to come up with a new concept for Legendaries, then spent more dev time implementing it, then figure out which other feature/system you want to cut out now. It’s not the money/effort you’ve already spent that’s the problem (which is what sunk cost typically focuses on), it’s the money you’re looking at potentially wasting ahead of you, and what that’s getting.

Sunk cost isn’t what applies here so much. It’s the idea of rushing something that you’re not going to carry forward.

There’s a difference between rushing something and shipping something that is a reduced feature set but still “done”. You still want to ship something that you think is good, but it doesn’t have to solve all the problems, just some of them. By that same token though, if what you ship isn’t meeting the needs, it’s ok to pivot and take a different approach.

Because of that, it’s often better to do small, incremental releases so that you don’t deliver a gargantuan feature that it turns out nobody likes.

I’m happy to wait for the rest, or whatever else Blizzard discovers that will enable the player base to be effective in the absence of voice communications.

There’s a few more considerations just to deliver even “just” that probably, the latter part is potentially what’s actually going to be the tricky part that takes the most time/testing. And frankly, I have a feeling that’s all they actually intend to do, if they commit to doing it.

TBF, they’re also saying Lords of Dread passed their idea of a test they felt people could easily communicate without addons or voice chat, so like … lol