Confirmed: Brutosaur Mount is now a Feat of Strength

i don’t think anyone was under the impression it was going to be “removed”… the people who have it get to keep it.

I meant, the achievement… Blizzard rebounding on their decision.

You could have had $450 of blizz balance instead. This FOS should come with the title “the regretful”.

Awfully bold statement, if you don’t want the mount don’t buy it. This just makes you look petty and jealous.

Except they should have said something at the start of the xpac.

Why does this matter?

Is there some kind of tangible in game effect for feats of strength that I am unaware of?

Some were waiting for Blizz to change their stance on it.

Who gets to define tangible?

Does having the feat of strength affect your in-game abilities? Does having it make you stronger faster or better than anyone else?

No? Oh okay then

However, they still haven’t officially announced that it’s moving to the BMAH once Shadowlands goes live.

It’s being added. Kaivax confirmed that back in November.

We will make sure that the unforgettable Brutosaur mount is added to the lists of possible items that are sold in the Black Market Auction Houses.

better than anyone else?

Yes if you’re a collector

The price tag long ago proved the mount was unobtainable for me.

It was confirmed some months ago…

Yeah, the blue came here and exactly said it!

As above said, I would have never been able to buy it for 5 million. Never, ever would I have had that much gold at one time. The most I’ve ever had at once, was 500 K for the lightforged warframe. That was in Legion with two characters herbing and mining, gold from missions, etc. Even then, I paid 20 bucks to make up the difference with a token.

So I think Blizzard’s worry that they would become “common”, like the repair mammoth or Yak, is silly. Most of us are already low on gold, with all of the in game sinks such as other vendor mounts at 70k gryphons to near 300 K frogs (still need to get those =/ ) 5 million would have always been an insane amount.

If anything, putting a time limitation on it will make it seem more common; People who may have never got it will now crazy farm for it.

People who may have never got it will now crazy farm for it.

It definitely pushed me to make a decision on buying it. I was going to wait until some as of yet to be determined future date to buy it, but I went and got it now instead.

Realistically though, anyone who needed to farm all or most of the 5m would probably never have the gold to get this thing no matter how long they had.
Removing it seems pointless unless gold is about to go crazy in Shadowlands.

The most vocal whiners about this most likely can’t afford it anyway.

I can’t afford it now. I could have afforded it by the end of the next expansion. I worked out a plan that fit with my available game time and what other things I want to accomplish in game. Since no other gold sink mounts have ever been removed, I figured this was doable.

Then some twit at Blizzard decided it would be game-breaking if they saw too many AH mounts running around “in the future”.

I never cared about having a mobile AH, I just want a sauropod mount. Unfortunately, despite the many various skins available in the database, Blizz decided to put only one mount in the game. And now they’re removing it from the vendors.

Sorry if it upsets your sensibilities that some of us find this move a tad discouraging and feel we have to tell Blizz so.

Realistically though, anyone who needed to farm all or most of the 5m would probably never have the gold to get this thing no matter how long they had.
Removing it seems pointless unless gold is about to go crazy in Shadowlands.

If their logic is about its value as a gold sink (as opposed to some sort of forced rarity idea), they might be banking on most people who can get it with little to no additional effort having it so it’s not really doing much anymore.

If it goes on the BMAH, it can rocket up to… whatever the current cap is if a few high rollers missed it during BfA for some reason get into a bidding war.

Alternatively, people with some gold to burn but who don’t/didn’t have 5M to burn could get it from there for much cheaper (if those with tons of gold don’t get involved). That gives people on the bottom end of the WoW Millionaire’s Club a significant sink too.

Alternatively, people with some gold to burn but who don’t/didn’t have 5M to burn could get it from there for much cheaper

Not gonna lie, if it starts at anything less than 5m I will be a little salty, like a low sodium potato chip.

“Prestigious” I’ll be honest even if I had five million gold… unless auctioneers were suddenly only available in out of the way areas I wouldn’t bother. The only mount I need (and have) is my yak with portable transmog, a shame the other side isn’t a barber as then it would REALLY be worth it.

I hate to break it to you but you having achievements and items that other people don’t have doesn’t make you better than them.

In fact by thinking that it does it makes you lesser.

It’s being added. Kaivax confirmed that back in November.

That’s not an announcement though. It was posted in a thread created by a player. It’s not a blog post of it’s own. It’s not on the launcher. They’re still playing coy with the mount being moved to the BMAH.

got mine four weeks ago. since then, i’ve made back around 150k gold just from chasing emissary WQs for paragon chest rewards with 17 level 120s 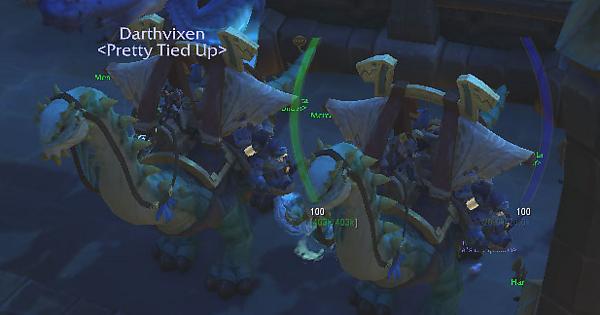 Why would you need a FoS?

YOU HAVE THE MOUNT. lol

You link a FoS to prove an “I was there” moment, because the thing/item/moment in question is no longer there.

But if you have the mount … you just… bring it out.

The only thing dumber than removing the mount… is adding a FoS. What a freaking joke.

People who have this mount probably don’t use it 24/7 as their only mount, they use it when they need to auction/vendor. The Feat of Strength is there for a number of reasons.

PS: And don’t worry, there will definitely be a new auction mount next expansion. And probably every one after that. With updated prices. Why would Blizzard remove their greatest tool for selling WoW Tokens and deflating the economy to bring down the gold value on them with?

Why would you need a FoS?

YOU HAVE THE MOUNT. lol

You link a FoS to prove an “I was there” moment, because the thing/item/moment in question is no longer there.

But if you have the mount … you just… bring it out.

The only thing dumber than removing the mount… is adding a FoS. What a freaking joke.

I agree with you. I could care less about it being a FoS. I liked the mount, so I bought it. I have friends who have been saving up for it, but they are not as good at saving gold as I am, so now they will probably never get it because of how stingy the reward system is in this xpac.

No. That mount is butt ugly.