I think the balance of the game can make some changes

As i said，The game is now fully formulated，Tactics no longer change，Because the best tactics already exist，All the games are just comparing the experience of the match，The operation of the game and on-the-spot response is no longer important，Who’s more important to start with, and who’s more restrained，Today’s games are not as colorful as they were ten years ago。
I think the balance of the game can make some changes。

Its true for the Highest Level starcraft there are well in playce builds. But there are also some trends coming and going at the Korean esport scene, like Protoss using speed shuttles and high templar storms instead of arbiters. So the trend goes on. On the noob level however there are a lot of possible things. I think it could be cool if Blizzard added some features like disabeling certrain upgrades, powers or Units in the game or exchanging Units between races. But Blizzard will probably do nothing about it

High level is not “solved”, there have been plenty of meta shifts in the past couple years.

For starters in 2017 there was a big change in TvZ to mech switching, where Terrans would open bio, usually 5 rax, use that to take map control, then lift their barracks and go mech.

In 2018 Flash popularized going 1-1-1 in TvZ, which became a really strong build that forced Zergs to find new ways to play the matchup. After a 1-2 months, Soma popularized 2 Hatch Muta instead of 3 Hatch Muta. Previously 2 Hatch was considered an allin, but now it’s actually an incredibly flexible build that keeps 1-1-1 in check, as well as giving good options against other Terran builds.

Then in late 2019, Goliath mech builds emerged and became really fine tuned. Zergs also started experimenting with many new unit comps at this point as well, using Queens with Spawn Broodling to kill tanks. Also Queen/Ultra is an interesting, strong build that started in 2020, it utilizes Ensnare to destroy bio, since it keeps their units locked down for the Ultra/ling to get on top of them, while also reducing bio damage output by 45% (since ensnare offsets stim). There was also the hydra/plague build seen vs bio at this time.

Flash pioneered using Valkyries in TvZ just last year, now their an actually good tech choice if your opponent is choosing to stay on muta with their 2 Hatch.

In PvZ we saw a change from Forge Fast Expand (FFE) to Gate Expand, using the Zealot to create pressure on greedy Zergs.

When ZerO (Queen) came back from the military in late Summer 2019 he created the 9734 build, which was an evolution of 973 (3 Hatch Hydra). The 9 7 3 stands for the amount of workers on minerals at each base, the 4 at the end was to signify the 4th base you make behind it. This new build forces Protoss to build a large amount of cannons and they lose their Forge (delaying +1) and their forward Gate. Protoss were then forced to learn how to put new pressure on the Zerg as well as how to defend (but not over defend) this new pressure build.

TvP is right now just seeing a huge new change to the meta, Terrans are going Ghost for Lockdown vs Shuttles/Arbiters/Carriers, and using Nukes to harrass expansions.

There are other instances, such as NaDa’s nuke timing vs Zerg (which has been seen a few times since). It’s crazy that units like the Valkyries, Ghosts, and Queens which were previously seen as useless are being used (unchanged) in very powerful ways.

Not to mention there have been a lot of insanely creative maps allowing for new strategies. There was Sparkle, Third World, Ringing Bloom, Block Chain, Whiteout, and Optimizer, all of which introduce new mechanics to the gameplay and have created for interesting matches. There have also been new insanely good “standard” maps, such as Sylphid and Overwatch.

Brood War does not need balance changes, if anything it stands to be ruined by messing with the units. The game is in a fantastic state with a lot of creativity available to players.

I took these examples seriously，But you don’t understand me，What I want to say is that ten years ago, we all had our own tactics，Our own ideas and styles，We can see different tactics in each player，But now that’s all gone，We’re just following the best tactics，That’s true for all of us，We give up our ideas and understanding，We just need to remember the best tactics，And then you don’t have to think about it，It’s like the robot we created，You really think it’s fun?

The internet exists, unless you’re a top player, you’re not going to be the one making the meta. You can still experiment and make builds, but if you want to improve in any game, you will be following the top.

This is true for every game in modern time, at lower level you’re not good enough that you can reinvent the wheel. Information spreads quickly, you should be looking to improve by learning how the top level players play. I guarantee you play nowhere close and have large gaps in knowledge. You should be looking to learn more and practice.

And yes I think this is fun.

There is a video of FlaSh talking about this, Blizzard gathered top pros to ask them if they wanted balance and bug patches.

FlaSh said he would like changes, additions and bug fixes but he didnt trust blizzard to be active enough given they cant even mantain battlenet issues properly, and may leave broken/bad changes for long periods of time, so it may hurt the game more than help it. That was the general concensus among the pros so they said No to changes, not because they think the game is perfect.

This is the video with translation: 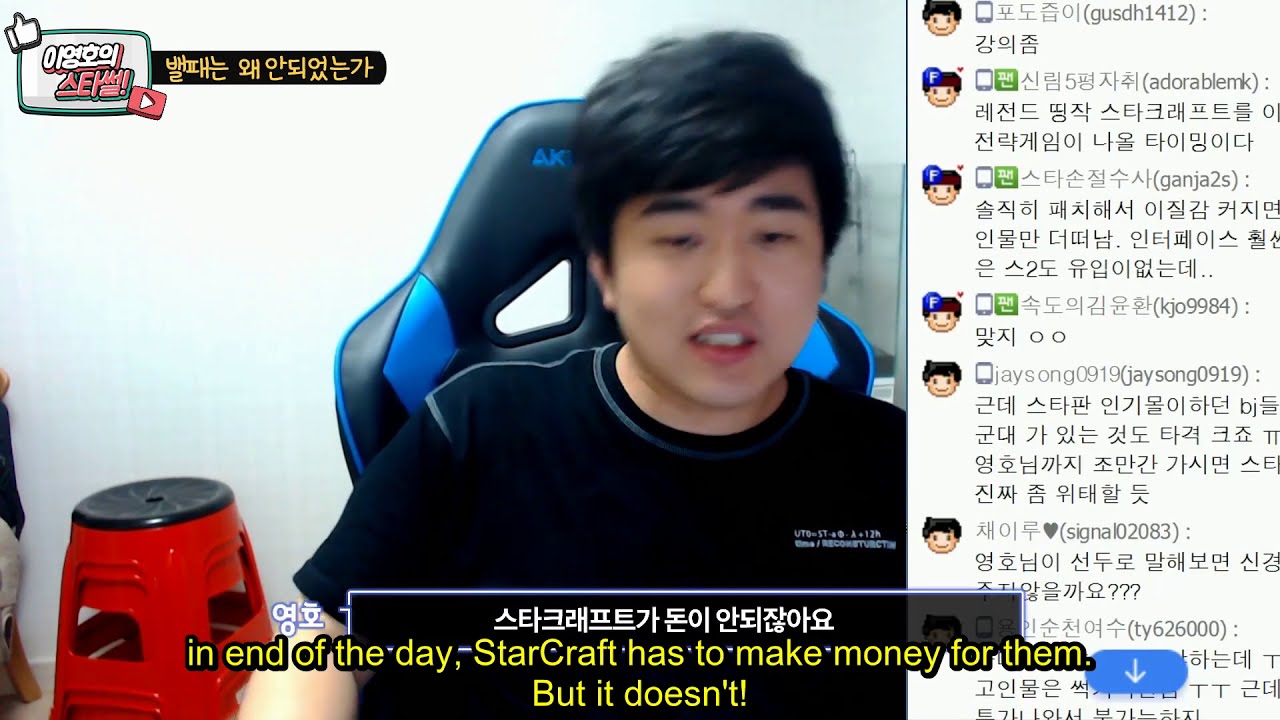 Chess has been around for ages and is still going. As long as people keep playing or enjoy watching the game it will stick around. Aside from that I do agree a new balance patch is needed to improve under utilized units such as the Scout, Ghost and Queen. Doing this could introduce new options for gameplay. A breath of fresh air for an old game.

No problem, honestly I think more than the gameplay is the graphics that dont attract any new players except for korea. But how would the gameplay feel with next gen graphics? maybe it feels wierd, no way to know unless trying it.

We had a conversation like this here before.
We were discussing adding another gateway like the PTR where experimental changes can be made to the game without affecting the live service.

Frankly, I think Infested Terrans are the one unit that needs huge buffs. They are so very useless despite the extreme and situational hassle it is to get them. The friendly splash makes them so difficult to use outside of overlord drops in areas that for some reason don’t have marines, goliaths, or missile turrets. I mean, do they really HAVE to be meme units?

Scouts are also generally lauded as being terrible except in very niche circumstances. Too bloody expensive and too bloody slow before the fleet beacon tech upgrade

One more thing. Is it really necessary for scourges to overkill?

Also, technically speaking, Valkyries were “buffed” by the unit limit extension. But I guess that’s more of a “major bug fix”

I think it’s similar to chess. Say, hundred years ago the games played were far from optimal compared to modern standards and at first glance had more variation. The ideas, styles, different tactics are still currently present at high levels both chess and StarCraft. Not so visible nuances start to play bigger role. But in order to see them you need a good high level commentator, for example. If you play at lower levels the possibilities to play creatively are still there as well. You don’t have to copy most common strategies and tactics.

Nerf Zealot is a change i would like to see. Make it cheaper but with worse stats.