We CAN say that Sombras skin costs 40$

Suppose I love airline meals. Specifically, the food served on a flight between Los Angeles and Shanghai. Does that meal cost $1,000?

Or, suppose the only thing I like about Overwatch is Lucio ball. Is Lucio ball a $40 game?

So you’re saying… This skin is worth more? Well what’s the problem then?

They should give us the option to at least buy the skin for $10 or something like the Nano Challenge! So we can go around that paywall!
EA-Move Blizzard.

its not a scam, they tell you what your getting, and if you pay you get exactly that. No lying or dishonesty at all. And it makes perfect sense for skins to be tied to Blizzcon. Its a convetion to talk about the games they make, and some exclusive content for their games is given to the people that attend it.

Did you have a problem last year with Winston’s skin? Or the year before with bastion’s? 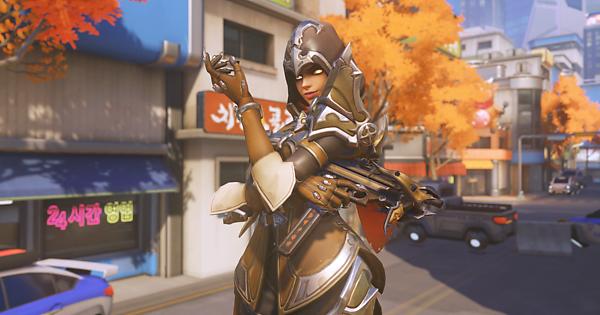 Notice anything out of place? Perhaps a BlizzCon logo or a different color scheme. This skin wasn’t made for BlizzCon it was tacked on last minute because they probably forgot to make another recolored BlizzCon skin.

Nah, they had it in mind as early as last year when they made this Blizzard World skin and never got around to releasing it in their free update.

Yeah I see they stepped up their game. Again if it didn’t bother people then, it’s shouldn’t bother you now. Nobody is forcing you to buy. It’s an exclusive just like all the mounts they gave away for WoW in years past.

I said it other posts, people who never played Blizzard games are in for a shock with Blizzcon. Blizzard never puts these exclusive stuff up again. Only one time for the Dva announcer for starcarft but it was said before hand it was an early access item.

Not when it’s an optional purchase they don’t. You don’t HAVE to buy squat. Also I think you have very, very little understanding of how much money it actually costs to develop one skin for an in game character, let alone the tonne of skins they put out basically for free with every new seasonal event.

Just wait a bit. They’re doing something with just the skin in 2019, which isn’t that far away. Patience.
Blizz has to make money and survive somehow.

First of all i don’t care about cosmetics. I think default ones are nice as they are. But having said that it is an extra bonus for me to get cool skins just by grinding the game. So for like 2 years I’ve had so much fun playing the game and collecting the skins. And their skins are really good too. A luxury that I haven’t seen in any other games except Warframe.

But then came token system for league and pink mercy, which I have no trouble at all. They both are for worthy causes. But then came the all star skins. 2 badass skins that you can only get by paying money. Well you can watch twitch for tokens. But it doesn’t really work in some parts of the world. And it’s way different than grinding the game. And now this, a cool Sombra skin, only way to get it is by buying the virtual ticket.

Now the troubling thing isn’t that they start selling cosmetics. It’s that grinding the game was a large part of OW for like 3 years now. You could get anything if you work hard enough without paying money. And suddenly the system has changed. Now there are things that you can only get by spending money. It doesn’t matter how much time you spend in this game. It doesn’t matter how many people start playing this game because you recommended it.

There was a certain trust between developers and consumers. But I’m worried that if they keep doing this it will damage it. I’m sure they have their reasons for this. But I hope it will not continue to grow out of proportions.

I said it other posts, people who never played Blizzard games are in for a shock with Blizzcon. Blizzard never puts these exclusive stuff up again.

Really? That’s sad. I liked the way how things were.

But he does. And it’s still a bad deal. He is allowed to complain.

Luckily though, the skin will be available later. Did it occur to some of you that maybe that happened thanks to the stink kicked up by people?

Did you have a problem last year with Winston’s skin? Or the year before with bastion’s?

Those skins were so bland, I forgot they existed.

You cant. Its a type of fallacy that involves extrapolation.
Just because its true for you, doesn’t mean its true for everyone.
2+2 still equals 4, no matter how you look at it. You are saying 6-2=4 and even its the same result, its not the same and you know it.

Blizzcon ticket offers X things, if you are only interested in one, thats on you.

You COULD say, and still wont be 100% true but closer, that Sombra skin costs=Price of Blizzcon ticket/Number of products it offers. That would be more appropriate.

As stated Here At the bottom of the Page

“The in-game items for Overwatch, StarCraft II, and StarCraft: Remastered will also be available separately in 2019—further details will be announced at a later date.”

Threads like these tend to get toxic really quick and become very non-constructive and non-productive. Before we get there, we are going to go ahead and lock this thread now.