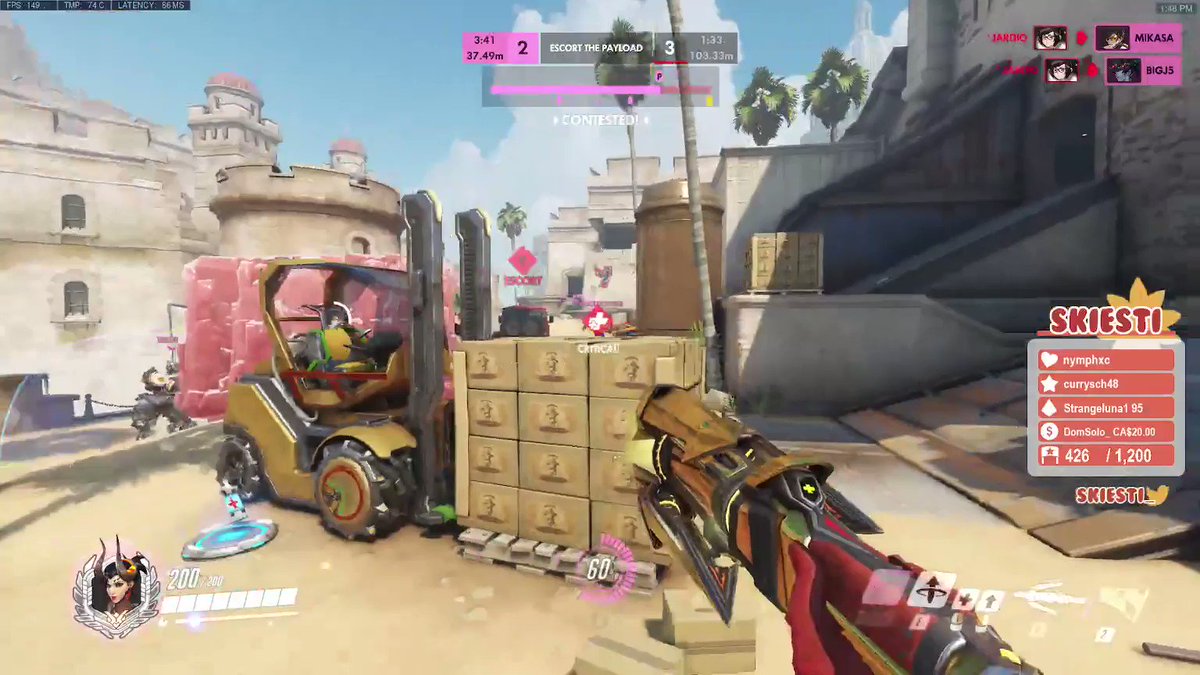 @skiesti_
Not a fan of almost being removed from a match because my team literally can't leave spawn https://t.co/e8xdcLlpid

Forget that they’re playing mercy, if your team is literally walking out of spawn and dying on cool down, that’s just the nature of the game. Then she gets the notification she’ll be kicked, even though it’s no way her fault that this is happening, ults and leaves spawn to not be kicked only to be hooked by hog, therefore wasting her ult not because of her decision making, but because the game forced her too. yeah she panicked but this isn’t her making a bad gameplay decision based off the context of the game, this is just this BS system holding her hostage.

I’ve seen clips of people panic leaving spawn only to be insta headshot and punished, unable to see the widow because of the huge red bar across their screen.

This is embarrassing. the game is literally making people mess up their pathing, ability uses, you know, playing the game. The game is making people lose. it’s so dumb blizzard.

Any outside influence affects the match, having a notification in the middle of the screen and being threatened to be kicked is an immediate disadvantage.

I’ve been playing this game for 5 years. I’ve spawn camped and been spawn camped so many times because it’s a perfectly viable strategy. nature of a game with spawn points and health pools. it’s not cheating or unfair, it exposes the defense because they have to be close to the spawn. they could C9 or completely throw because of an overconfident spawn camp, it’s a high risk high reward strat. and punishing the other team for being better isn’t necessary, the loss is punishment enough. and it’s not even necessarily a loss if the spawn campers mess up. maybe that valk could have ushered her team out of spawn to a nice victory, but we’ll never know because of this dumb system that forces players to walk out of spawn immediately or be kicked, even if there’s a hog 5 feet away with his hooked aimed at you.

get rid of this it’s so embarrassing. let the game be player vs players no handycaps.

It was already confirmed that it is some sort of a “bug”, that they implemented in order to prevent bot accounts throwing games, staying in spawn the whole game. They are working on a fix for this. But when will it be fixed, we do not know:

Hi folks, We are aware of this issue and are working towards a solution. No ETA as of yet. Apologies to anyone who’s been affected by this.

get rid of this it’s so embarrassing. let the game be player vs players no handycaps

No, this is here to prevent bots throwing in spawn.

Spawncamping is a legit strat. I have had games here in GM where the enemy team was able to spawncamp us First Point Havana Attack without us being able to leave the spawn for a couple of seconds.

We were outplayed, GG

I just want to confirm something, have any of these instances happened since the implementation of the new patch on Tuesday? The bug report forum has been quiet about this issue, so it may have been resolved without documentation.

It was happening in my game on hanamura on Xbox we were getting spawn camper and the inactivity time went off even though we were moving around in spawn and even damaging them from the room.

Ive gotten it in the middle of team fights on ana where im shooting the enemy and a red banner that gets me killed. Yes its recent

i feel for you, this happens to me all the time. the game is a joke. competitive mode is an even bigger joke. I know the correction squad will show up to tell me how wrong I am. Blizzard is a dumb company if they think im gonna spend 60 bucks on overwatch 2 when the first one is such a mess.

Blizzard is a dumb company if they think im gonna spend 60 bucks on overwatch 2 when the first one is such a mess.

OW2 is a free upgrade, you only pay for PvE

First comment that clearly has not seen the video. Not surprising at all

Thank you for saying it lol

Hi, this isn’t my clip so I do not know the exact time except when it was posted on Twitter.

Don’t know if Tuesdays patch fixed bugs, but if the “kicked for being in spawn” is still part of the game, with the timer on the screen and everything, I don’t feel any amount of bug fixes make it better. Even without any glitches there are too many clips or stories of people losing games because of this feature. I made my points in the original posts, I just hate how it ruins the integrity of the game by forcing someone’s hand to leave the spawn of be kicked, even if the whole enemy team is there. Seems like an advantage to the spawn campers which is really unfair and honestly kind of a bad joke.

I don’t play any other shooters, but we went for years without this feature without incident but suddenly every YouTube montage or Twitter thread has tons of clips and stories about people losing games because of this feature. Jay3, one of the biggest streamers of OW on twitch, got this message, left spawn in a panic in his top 500 game, and got snipped by the other widow because of the huge red bar in the middle of his screen. I don’t care if it’s bronze or top 500, everyone playing this game deserves to try their best to win without the game forcing their hand. Making people move positions on a time limit is the definition of that. I really have to leave spawn when the nano-visor is out? I can’t wait the extra 10 seconds, the game has to kick me because I’m making the objectively right move not to feed?

Think I made my point, thanks for reading and hope this feature gets removed.

but we went for years without this feature without incident

Unfortunately, this is not true, for several years there was an exploit in which a coordinated 6-stack could idle in spawn and force kick their opponents due to inactivity and it was a problem that I was very much aware of.

The feature is not getting removed but it should be getting fixed to ensure fair play for everyone.

That being said, I did confirm that the current bugged spawn inactivity rules is still not corrected and we will need to be patient a little longer.