I know this is a big change, but can we all try to be civil and not attack each other or the devs for this decision? 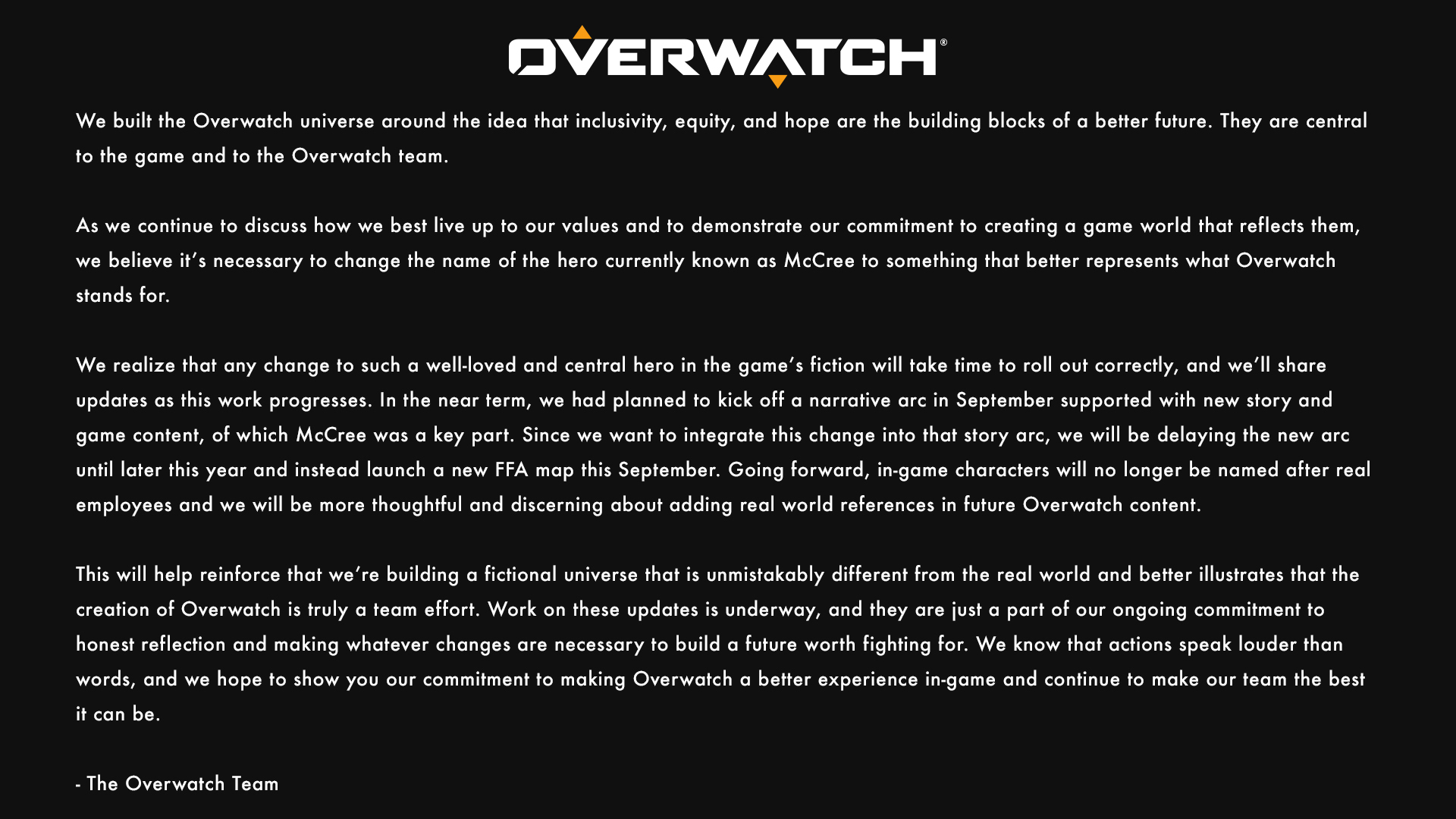 @PlayOverwatch
A message from the Overwatch team.

We built the Overwatch universe around the idea that inclusivity, equality, and hope are the building blocks of a better future. They are central to the game and to the Overwatch Team.

As we continue to discuss how we best live up to our values and to demonstrate our commitment to creating a game world that reflects them, we believe it’s necessary to change the name of the hero currently known as McCree to something that better represents what Overwatch stands for.

We realize that any change to such a well-loved and central hero in the game’s fiction will take time to roll out correctly, and we’ll share updates as this work progresses. In the near term, we had planned to kick off a narrative arc in September supported with new story and game content, of which McCree was a key part. Since we want to integrate this change into that story arc, we will be delaying the new arc until later this year and instead launch a new FFA map this September. Going forward, in-game characters will no longer be named after real employees and we will be more thoughtful and discerning about adding real world references in future Overwatch content.

This will help reinforce that we’re building a fictional universe that is unmistakably different from the real world and better illustrates that the creation of Overwatch is truly a team effort. Work on these updates is underway and they are just a part of our ongoing commitment to honest reflection and making whatever changes are necessary to build a future worth fighting for. We know that actions speak louder than words, and we hope to show you our commitment to making Overwatch a better experience in-game and continue to make our team the best it can be.

Interesting thing but we’ll have to see that they actually deliver.

Wow, they’re actually changing his name. Totally unnecessary and ridiculous, but at least there’s already grounds for it.

Why? Why people are that stupid to make Blizzard do that? Seriously? What the hell?

Why? Why people are that stupid to make Blizzard do that? Seriously? What the hell?

No one’s making them do anything. They’re just virtue signalling.

There is no way this is happening right now

Ngl I might still call him mccree, I dont really care

…
So does this mean his name really was Joel?

They can’t possibly be virtue signaling this hard. Not after they were found out shredding important documents regarding to the lawsuit.

I guess it really was a terrible name for a cowboy…

Shouldn’t be named after vile filth.

This is just an easy low hanging fruit PR stunt. Blizzard is not a company that cares about causes or the well being of people. It’s just marketing and trying to appease people into buying more product.

Today was full of ups and downs for me

hahaahahhahahaha rly? xD what a stupid decision. back off while there is still a chance…