Is it time to rework "Tanks" and team breakdown

Now, we all know that Blizzard pretty much caters to the elite player, however this is something that they may just look at. We have 8 “Tanks” but in reality, we have 3 (maybe 4) true tanks. The Hamster, DVA, Roadhog and Zarya (Winston is the grey area) are primarily played by those that wish to do dps, rather then “Tank”. Now, I am not being critical of those players but there is an issue.

Perhaps by changing the match setup to 1 tank, 3 dps and 2 heals … plus moving the above listed “Tanks” to the dps field, we could have a better match. If the person is going to play Roadhog as straight dps, great… but que up as a DPS, same with Zarya. The concept of dps having a shield is not new, Bastion use to have a shield (switched to self heal). By switching those toons into the DPS pool, it would also allow those that really want to tank, a true tank toon, not the hybrids that we see. Yes, I understand many play Rein already, but that is because defensively, a walk around shield has so many more advantages then a static one.

Now as far as what i think of as a tank, or perhaps what you do is up for debate, but i think most will agree that if you get into a match, with 2 offensive minded tanks, who are rewarded for doing so btw (extra boxes), then it is much more of a challenge just to over come the team makeup and your opponents to boot. Give it a think.

Give it a think.

Sounds good to me. Although maybe something they shouldn’t do until OW2. 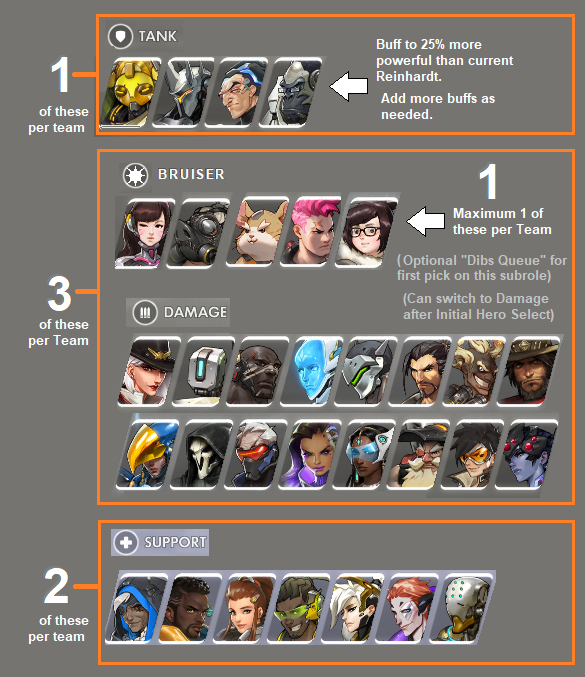 LOL hojnestly i didnt even know this was a thing

How would you feel if doomfist was added to the “bruiser” roster?
Also I love your images and ideas.

LOL hojnestly i didnt even know this was a thing

Yeah,… I have put a lot of thought into this subject… too much…

How would you feel if doomfist was added to the “bruiser” roster?
Also I love your images and ideas.

I could see it happening, but I think he’s too flank oriented to be providing peels or standing on objectives.

I was thinking about his “best defense” passive could be a great tank tool.
Possibly gives shields to allies in a radius?

They are off-tanks… An off-tank is still a tank and a rather important one since they are the ones which are suppose to punish overextenders and flankers.

I was thinking about his “best defense” passive could be a great tank tool.
Possibly gives shields to allies in a radius?

Well, or the better alternative to my argument is that fielding a Doomfist would actively prevent you from using more valuable OffTanking abilities.

Incidentally the “Flanks too much” thing is also why it’s problematic if Sombra was in the Healer role.

That’s why he would need a rework.

agree to disagree. They are not off tanks and they get a bonus for playing Off tank… if 2 people choose off tanks that really hurts the team makeup.

That’s why he would need a rework.

Or just leave him as-is, but cut down on his annoyance factor somehow.

Possibly then give him airwalkers doomfist RP rework

Makes him less “unfun” to play against, but a strong hero.

Well one I’ve seen that seems good is making is so that the distance you get knocked back is inversely proportional to the distance Doomfist has traveled with his Rocket Punch.

The changes are aimed at making Doomfist a little less frustrating to play against.

Also maybe make it so that if Doom is coming in from above you, that it pops up a Tracer/D.va bomb style visual warning.

It sounds like a good idea definitely, but honestly I’m going to have to go for airwalkers one. I like the idea of reducing the amount of “one shots” in the game.

Problem is, what happens if you mini charge? You throw them off to narnia xd

Little off topic… but Phara and that new extra damage to blast ratio… crazy… didnt hit me once… just shot at wall near me… and i died lol. So… shooting at a wall, not actually hitting a toon and dead.

if 2 people choose off tanks that really hurts the team makeup.

That’s the fault of bad players then, and isn’t something that Blizzard should try to fix.

Dude… seriously… come on. That answer could be made to ANY situation… I said give it a think… i meant with the lump of coal 3 feet above your belt… not the one 3 inches below it…

D.Va is played to peel. That’s something a DPS doesn’t do. She also is meant to protect the team. She’s not a DPS, she’s a DPS in a DPS players hand, in a tank hand she’s a character that protects the team.

Perhaps by changing the match setup to 1 tank, 3 dps and 2 heals … plus moving the above listed “Tanks” to the dps field, we could have a better match