Are you god damned kidding me man, mystery heroes garbage

Bastion and 3 mercys healing and damage boosting him, are you actually serious with this BS. Last time I ever play that trash piece of crap arcade.

that’s how u win Myzery Hero’s

Smart players would still struggle against that

Hero stacking does not belong in that game mode…

yeah i left the game. never touching it again

Hero stacking is part of the RNG of Mystery Heroes the problem is losing all ult charge upon respawn even if you come back as the same hero.

Remove stacking and Mystery Heroes would be fine.

Unfortunately Blizz won’t do it for no reason other than, they won’t do it.

It’s typical of their generally terrible attitude to their players; ‘We’re right because we’re right!’

Hero stacking is so bad in mystery heroes. “Ok, guys, I got emp to shut down their bastions”, 50% of the time, you’ll get one shot by a stray headshot before you attempt that and 49% there’s no follow up. The elusive 1% is when it works.

I mean the mode is completely and utterly pointless, like you don’t get better, hero stacking doesn’t exist in QP or comp. You learn the wrong things.

Stacks aren’t even that big of a problem, the worst and most undefeatable comps I’ve gone up against have had 0 stacks but just a REALLY effective combo.

I keep track of who/what won for these threads complaining about stacks and MOST OF THE TIME stacks have NOTHING to do with it. It does happen yes absolutely but you just tend to notice it more and it’s an easy thing to point to and say “this is the problem” but ACTUALLY it’s not

People who complain about stacking are the same people who only play the mode for boxes and then don’t touch it again for a week.

AS some who spends 99% of his Overwatch time in mystery hero, I say that STACKS ARE NOT THE PROBLEM. It’s ironic that people what “hero limits” because they think it’ll make the mode easier but actually it’ll make it 10x harder (and just ruin the mode)

People complain about things like triple Orisa but do you really think it would it be any better if it was Orisa/Rein/Winston? NOPE!

Dva/Ashe/Basion/Junkrat/Orisa/Wrecking Ball
Brig/Sombra/Mercy/Tracer/Zarya/Dva
Mercy/Zen/Brig/Zarya/Soldier/Pharah
Winston/Orisa/Soldier/Widow/Sym/Mercy
Doomfist/Soldier/Orisa/Rien/Torb/Wrecking Ball
Wrecking Ball/Zen/Widow/Rein/Hog/Dva
Ana/Hog/Sombra/Soldier/Mercy/Pharah
Lucio/Reaper/Orisa/Bastion/Rein/Winston
Orisa/Doomfist/Bastion/Reaper/Ashe/Zen
Orisa/Torb/Junkrat/Reaper/Ashe/Zen
Brig/Bastion/Torb/Zen/Rein/Mercy < We were attacking on Blizz world and it was an absolute slaughter, 0 deaths for me and there were 0 stacks.
Zen/Reaper/Mccree/Ana/Widow/Orisa < this is what the enemy had on Defence Numbani 1st point, the Widow was pocket and protected the entire game and we couldn’t do ANYTHING about it and not even having 2 Mercys could help us break the hold and again ZERO stacks for the winning team

Like I said, it’s just easier to point at the stack and say “this is why we lost” and when it’s not a stack you just ignore it. If you get a hero limit the next thing you’ll be demanding is a class limit because “they got 5 tanks and a mercy IT’S NOT FAIR WAAHH”

This mode isn’t about 2-2-2 it’s about wild RNG and I don’t want to see it ruined by people who only care about it when they want their loot boxes.

Well, you know my opinion on the subject:

Having randomized heroes is a good idea. Having purely randomized heroes, with no rules on team composition can get to feel like whichever team has the best RNG automatically wins. Killing the fun of this gamemode. But there are some easy rule fixes on next-spawns: If a team has 3x healers, don’t spawn more healers. If a team has 0x healers, next spawn is 100% a healer. If the team has 2x self-heal non-healer, don’t spawn any more. (These are overpowered in this mode). If one team has a Phar…

That said, you ever wonder what Lucio does with his Hair? 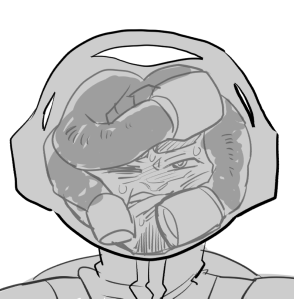 Context: Was looking up non-pepe stressed frog memes for your username.

No because it ruins the “mystery” if your team has no healers then you know full well you’re going to end up as a healer when you die.

Keep it pure RNG, the game looks at you and only you and rolls a 29 sided dice and boom that’s who you spawn as.

When you start making it look at what other people on the team are or what the enemy has and basing the decision on THAT instead of it being purely random, you ruin the whole point of the mode.

Stacks aren’t even that big of a problem, the worst and most undefeatable comps I’ve gone up against have had 0 stacks but just a REALLY effective combo.

This is exactly where I get most frustrated in Mystery Heroes—not when I go against a broken comp (because at least getting annihilated by 3 Bastions is funny), but when I go against a good, synergizing comp. Because in a big stack of goofy heroes, they have stacking weaknesses, too. One well-placed Junkrat tire can wreck the ultimate Bastion Bunker. Running up against unorthodox team comps means you are forced to get creative about how to use whatever tools you actually have, and you have to try and figure out what the enemy comp adds up to, and what you’re going to have to try to accomplish to start swinging the fight.

But if the enemy has a nicely functional 2-2-2, and my team has a whole bunch of non-synergizing nonsense, then it’s going to be hard to poke a hole in that, because there’s no obvious weakness to try to exploit. They’re just going to function, and we’re going to flail, and I can get that experience by going into QP.

No matter how non-random the game gets—you could straight-up force mirror matches if you wanted to—there’s always the possibility that RNG can essentially hand the win to one team or the other. Allowing stacks allows a certain kind of dynamic strategy that the other modes don’t have (rightly so!), and if stacking was removed, I think MH would be poorer for it.

When you start making it look at what other people on the team are or what the enemy has and basing the decision on THAT instead of it being purely random, you ruin the whole point of the mode.

Big agree here. Any time the RNG gains an element of predictability, it becomes gameable, and the last thing I want is for meta-micromanagers to have an inroad into MH.

True, when you get a Mercy in mystery heroes you protect her with your life. Rezzing people with 50% or more ult charge can hard carry that game mode.