The Whirlwind Rend Nerf is effectively more than 7 Tiers

That just reeks of dishonesty.

I don’t have a beef with you, but since I’m pretty well known in the Barb community, I want to chime in to prevent further conflict.

Ulma is one of the best Barbs on the NA server. He’s also one of the best group Wizards, one of the best solo DHs, and one of the most knowledgable people about the game, on any server, period. I don’t say this because he’s a friend and a clanmate. I say this because time and time again, over the years, he and I have collaborated on builds, on theorycrafting, on pushes, on optimizing, and more often than not, his intuition–and more importantly, his knowledge–are to be trusted.

That’s not to say anyone, including him (or me) is right 100% of the time. There are a lot of variables at play in a GR push, and you’re right to look at his videos and say, “Well, this could be optimized, and so could that…”, but please understand that Ulman and I have spent hours on Discord–and countless hours since the PTR dropped–working on WW. And when he says the nerf is a minimum of 7 GR tiers–and likely much more for the vast majority of players–he isn’t kidding. My own tests have confirmed it. The play experiences of many Barbs have confirmed it.

On paper, that amounts to a 7 GR nerf, give or take 1-3 tiers for variables in how the build performs in density, how quickly the build deals sufficient burst damage, how much it benefits from AD and other procs, and how much fishing or persistence is put into the build. If the belt had gone live with 200%, we would have seen 141, 142, and 143 clears.

But what I can tell you is that his estimations–which are shared by myself and several other smart Barbs–are accurate given the mechanical and numerical limitations of the build.

Frankly, I’ve lost your point amid the arguing, and I’m no longer sure that you understand the core problem of the build at present: without Lamentation’s multiplier, it can’t load all its damage into Rend, and it if it loads even some of its damage into WW, the build is a janky, uneven mess that is at odds with itself.

And really, what are we even arguing here? That a 133 can be done better or definitely cleared? Or at a certain Paragon?

I just don’t see how the nerf could be more than 8 GRs. 3x damage is a smidge over 7. Round up to be safe and conservative.

Something else has to be missing

Reason is that when Rend was dealing the damage, build didn’t need to rely on AD and bloodshed explosions, nor 3 screens worth of mobs. When you took the Rend damage away, you basically went back to the old build that needs all that, and because of that you are back to same issues the set had.

My point is that if you don’t change anything about your setup, just play on live as if all your damage was still rend, then you should not clear more than 7 GR below PTR.
That would match the loss of rend damage and ignore the still negligible amount of ww damage (just with a quick d3planner check, with istvans and ambos, rend has ~75 times the dps of ww on live (acounting for lamentation on d3planner still havong the 200%))

edit: had actually forgotten to put rend skill damage in, so now even bigger gap

it basically is 2 different builds,

The way WW deals damage and benefits from AD and Bloodshed is completely different from the way Rend deals damage.

7 GRs worth of nerf may be a conservative estimate. This is what the developers didn’t understand. They saw a static multiplier and didn’t take into account how the build dealt damage and how it will deal damage.

7 GRs worth of nerf may be a conservative estimate. This is what the developers didn’t understand. They saw a static multiplier and didn’t take into account how the build dealt damage and how it will deal damage.

I don’t know why, but they always chose to ignore barb mains when it comes to feedback.

Tell me about it.

I discuss that at the bottom of the OP here: A Barb Response to the Lamentation Nerf

I did not enter this thread doubting his intentions. I just got frustrated along the way. I still do not think he tries to mislead anyone.
I just disagreee with his testing method, which is why I asked him to show a Rift Guardian fight.
I think the mechanics of rend bloodbath just make assessing rifts extremely difficult, which is why I mentioned a few times how insane the mob type for 140 was: Grotesques, Zombies and mothers all generate extra mobs in some way (though Zombies not reliably), thus giving more damage through bloodbath and higher Rampage uptime

As for the nerf to Lamentation changing the entire playstyle:

My point is that if you don’t change anything about your setup, just play on live as if all your damage was still rend, then you should not clear more than 7 GR below PTR.
That would match the loss of rend damage and ignore the still negligible amount of ww damage (just with a quick d3planner check, with istvans and ambos, rend has ~60 times the dps of ww on live (acounting for lamentation on d3planner still havong the 200%))

Unless I am missing something truly major on d3planner WW damage should be completely irrelevant and not really influence the overall feel of the build (it should literally be < 5%, even after acounting for dust devils)

That doesn’t make sense though.

Why are you changing anything?

Rend damage lost a 3x multiplier. Play it exactly the same. Rend damage should only do about ~7 GR less damage if you change nothing else. This assumes mob type and density of course.

It’s not like you’re adding Area Damage back or Skull Grasp back obviously. So why are they two different builds?

You’d still use IB/Bloodbath and focus on Rend damage.

I’m confused to say the least.

There’s no reason it should be more than 8 GRs unless you’re changing other factors. Which begs the question, why are you changing those other factors?

I mean maybe you don’t kill as fast, so you go for a tankier build. Maybe that also adds more damage loss…

I dunno. I just don’t agree with the “it’s two different builds” just because Lamentation lost its multiplier.

Add me on btag, jay#1401. Not going to discuss it here. I’ll be on tomorrow night at around 9 Eastern hopefully.

I did say it was going to be more like 9-10 tiers but got ignored because I’m not a barb main and everyone just focused on Rend damage maths which is fair play.

But when you shift powers like that on a separate multiplier that’s no longer there things are going to be more effected than the minimum, that’s why if you at least had 100% it would likely be the maximum of 5 GR’s difference. Oh well carry on.

It should be the opposite.
Builds should be less affected than the maximum. If one part of something gets reduced by x% then the total will be reduced by less than x%.

Ya. That’s a good point.

Something ain’t adding up.

If y’all are experiencing 10-12 GR drops something else got changed besides just Lamentation’s 200%.

While I disagree with the barbarian…temper tantrum…of the last two weeks, no question the nerf was too much. The fact Crusaders are soloing 150s now makes a mockery of it all. Nerf them, and revert the Lamentation nerf before the season goes live.

D3 has zero credibility right now. It’s a joke. D3 credibility is normally in the toilet, and it’s even lower than usual.

Sorry to seem cynical or like a troll. Maybe I’m too dumb or this is too complicated, so I need some nice person to clarify things for me, it would be very much appreciated.

I haven’t played a Barb for years, but isn’t Whirlwind meant to be the AoE good for T16 kind of a build similar to DH Multishot (with either Marauder or Unhallowed Essence)?
I don’t see DHs clearing 140 with Multishot, so why are Barbs complaining, that they can’t clear 140 with Whirlwind?

I don’t remember reading Blizzard’s official list of what builds we’re allowed to play which roles in the game. Please share.

You got scared about a 140 clear in PTR when 140 at paragon 10,000 with a modern DPS build is absolutely expected. WD, DH, Crusader, and Wiz can all do it at that paragon or less. No one’s calling for them to be nerfed. I play both Barb and DH and I am happy other classes get fun stuff for high tiers. Why don’t you feel the same way about Barbs?

There you go here too. This is the fan boiz of steamers. Not us (“the elitist barbs”), as we are ROFL 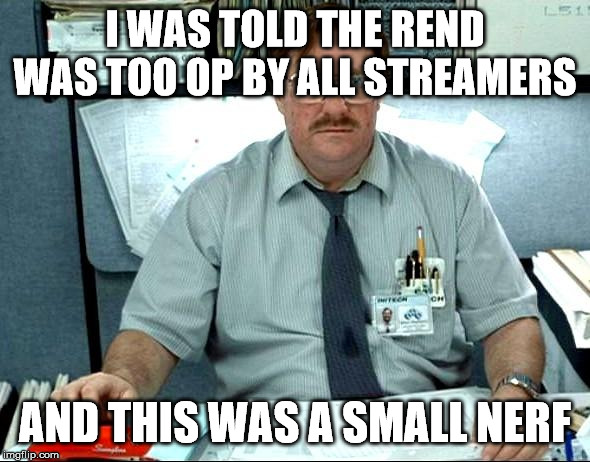 Unfortunately the above image may be applicable to the people planning and implementing these updates as well. State of D3…

I mean, the game is pretty much dead. The vast majority of what would be the Diablo player base are playing other games.

Focus on the topic if you’re not a troll.

The game is dead or not has nothing to do with the topic, and by saying that you are pretty much claiming your debates are meaningless. Why bother posting then?

I was asking the same question but no barb bothered to answer me. All claims seem to be from experience.

This may be an effective strategy if their purpose is to get barb buffed and don’t care about power creep. Crusader clearing tier 150 GR has told us devs doesn’t know or doesn’t do math before releasing anything.

Your only thinking about the math from loosing lamentation buff. There is still Rend damage in the build now that makes other stats required in the build.

WW damage uses area and attack speed in high trash count pulls
Rend damage uses damage%/cooldown in crimson build.
The damage sources need opposite stats with only a few possible spots to fill.
so there is no way to optimize the build properly. No matter how you roll your stats it will hurt you some way. In the PTR version on wwrend we could lode up on dmage%/cooldown and go one shot everything 110+ and even trash in 115s where getting one shot when my COE cycle rolled thru. Now Im losing my rampage stacks even in my 105 speeds. When I cleared 118 on the first live day my rampage stacks were almost nonexistent. Because there is no area damage trash kills suffer bad and create a nerf directly to rampage passive. You add all this together add it is -7 plus an unknown number. I would say that wwrend is weaker then a core zodiac build at the very top end if say Wroboss decided to come back and really push like old times.