Well pre-patch the max I had reached was GR103. Post-patch, exact same setup and items = GR106/7 giving me just about the same level of difficulty clearing it as 103 pre-patch did.

I’m not seeing any real benefit whatsoever. This is with a Valor set NOT using HF because its gameplay SUCKS, doing all of my damage with FotH.

I find the FotH steed build best for speed farming. It’s not going to do much for pushing GRs. Then again, I don’t push GRs much to begin with. Sure, the timing and clunky game play feel to HF using steed isn’t the most enjoyable, but definitely should do better at pushing GRs than FotH steed.

Fist of the Heavens is underestimated, I trashcleared GR144 on non-season in a meta type group with some missing augments. I have seen 2.5Q hits, and 2.5k ping at the same time.

There is more to this build than meets the eye, the downside is group lag and fragileness, which is a quick pass since A6I2 Bombs is stronger.

2.5Q as in Quintillion? A million times a trillion? Heck, the most damage I’ve seen my character do is 44T with HF. Though I remain skeptical, I looked at your build and see some of the potential my character is missing. Almost 60% more FotH damage from affixes rolled on four of your gear items sure sounds nice.

I’m not sure that’s mathematically possible with fists of the heaven. I seldom see those with my bonespear necro in poison cycle. Bug perhaps?

That’s probably area damage. When a monster get hit by multiple area damage proc at the same time, the game will show the total damage done by all those proc.

That would make more sense. Myself though, I usually only have critical damage show in my game.

theres numbers popping out all over the place. it’s hard to keep track of them without overlays.

That is not solo damage, it is with zBarb + zDH buffs, yes a smaller formatted Area Damage number in best condition, Oculus Ring/Lightning cycle. Solo i believe I saw numbers as high as 500-600T.

Here is a video from PTR: 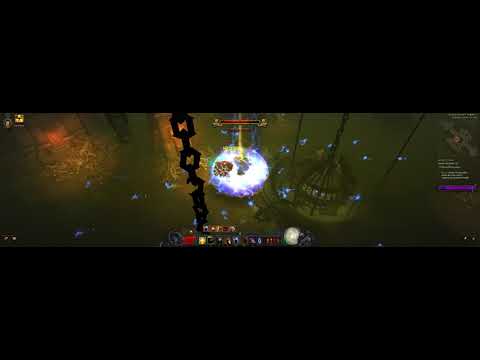 Any specific time frame in the video to observe those numbers? Watching the video for a minute from the start on 0.25 slow mo, the most I saw was perhaps 60T (which is still fairly impressive for FotH).

was it with a power pylon? lol

Here are some numbers:

I took a screenshot from the original video since YouTube’s resolution made those area damage numbers impossible to see. 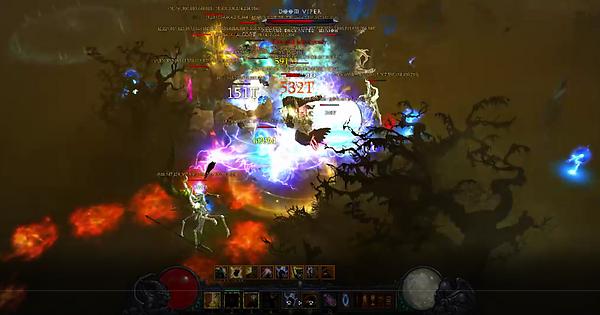 I took a screenshot from the original video since YouTube’s resolution made those area damage numbers impossible to see.

Okay, it’s clearer in your last post, but I realized I was looking only at the yellow numbers. I notice the red ones occur right on top of your character, plus she uses Zei’s Stone, which is puzzling to me. I would think your biggest damage would show further away from your character?

No, it’s not useless. It’s definitely sigificant. If you push GR106 now as opposed to your old GR103 it could be many other things too. The mobs could be more difficult, the geometry of the floor could be bad, a good usage of pylon can mean the difference between success or fail, or simply you didn’t play that well. The new reworked set seems very decent to me at least, although i am not that experienced with crusader. I used to play Aegis FOTH some time ago with the old set (100% multiplier) and the difference with the 400% multiplier is definitely noticeable.

Yes, it was much more difficult to see anything in the YouTube footage.

The zbarb+zDH combo will pretty much multiply your damage by ~4x and you can drop stricken too.

The build’s single target damage is surprisingly good, most of the big numbers are double hits due to Darklight, and I’m guessing the Fissure damage equates to quite a bit if many are overlapping the same target.

The build would work better if it had more defense and you could survive in density, in that GR135 clear, many opportunities to move to an oculus ring were missed, i counted on the Shield pylon and cheat deaths to dish it out. A6I2 and other builds are safer on density. Khassett’s cord should pack a regular 60% RCR buff so it can work with Capt Crimson — not having permanent AC is a big problem. Steed set should really help us with AC.

Zei’s gem is helpful since this ultimately is a kiting build, but it could be replaced by Esoteric, but even that leads to numerous death.

Well, the big thing for me to realize here is that you did indeed achieve 500T damage, but how often does that occur really. I look more at the yellow number damage and go by the average most often.

When you think about other builds, and how much damage they do, my season 22 crusader running A6I2, also barely clearing GR135, hits stuff for 800-1Q in peak conditions, and the random off cycle hits are like 25T.

AoV6 HF with Ivory Tower has a similar set of numbers to FotH.

My S22 A6I2 build is slower on the guardian than my Non Season FotH.

As an FYI, i’m not advocating for a better FotH build, i think it has too many flaws with lag, while it does great for speeds/key farming. I’d much rather see Phalanx, Blessed Shield, Blessed Hammer and Sweep improved.