I had multiple sessions where my < 70 lvl Monk with:

The first time I encountered this bug I kept playing the rift for a while, but I kept on getting only 1 XP for the whole time. Outside of the rift I got normal XP (rift was left open).

I Googled “diablo 3 ptr bug report” (I checked my History, so I am sure I Googled PTR), which led me to Reporting Diablo III Bugs - Blizzard Support . Thus I ended up on this forum.

I would delete my reports and re-post them on the correct forum, but I am locked out for roughly 24 hours. Thus, I’ll leave them for now.

That’s fine… you might be able to move the topic to the PTR Bug Report forum, if you want to give that a try.

Scroll up to the very top of the topic and click on the pencil to the right of the title… as if you wanted to edit the title. This should allow you to change the category from Bug Report to PTR Bug Report… approve the change to move the topic (your original post and all the replies) to the PTR Bug Report.

Best of luck in your games !

Unless you equip a Gem of Ease in your weapon it’s quite easy to get leveled up so far running a rift that you get almost no experience from the kills. This is because every monster (except for the Rift Guardian – the guardian will be your current level) are the level you started the current rift floor at. So if you’re level 20 and kill enough to level up enough you’ll get the experience reduced for each kill. But, with a Gem of Ease of at least Rank 25 you’ll get 3000 XP per kill regardless of the scaled XP.

It’s presumably just a case of having the +100% PTR XP bonus being applied before the XP scaling adjustment, but I failed testing outside the rift because monster XP is zone-loaded rather than level-loaded.

Anyway, as ontheleft has already stated, it’s not a bug. You’ve just exceeded the XP of the zone you’re in.

There’s a misconception that enemies will spawn at you’re level. This is false. And don’t think of a zone as one contiguous zone. Think of each zone as a series of subzones. A rift is a zone, with each floor being a subzone. But outside of rifts, something like The Cow Level might actually be 9 subzones.

Every enemy that spawns in a subzone is snapshotted to the level you are on spawn on entry. Even enemies that haven’t spawned yet, if they spawn in that subzone, will be that level. Upon entry to a new subzone (e.g. a floor in a rift), you’ll have a new set of enemies which will then snapshot to your newest current level.

That is why, outside the rift, you’re getting “normal” XP. But if you keep killing stuff and gaining obscene amounts of XP, which is what happens on the PTR with the XP buff, you’ll soon gain no XP in those zones either. One small difference though is that if you move further in, you’ll cross an invisible boundary to a new subzone.

A demonstration of how this works: 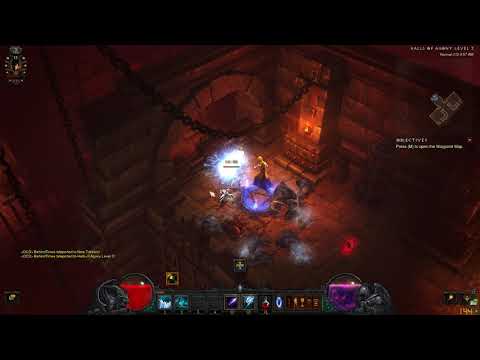 Along with rift guardians, enemies that don’t naturally spawn will be your current level, such as with Cursed Shrines or Cursed Chests.

Like you said, it’s implemented as doubling the earned XP to 0.00002 and then rewarding 1 XP. But the community buff promises a +100% increase in experience rewards (see the upper right icon in-game), so for me it’s a bug.

Returns the smallest integral value greater than or equal to the specified number.