I recently reforged a level 70 vengeful wind fist weapon and received a primal ancient version which has approximately 1/6th the damage of its ancient counterpart.
my query is weather or not this is actually a display error or an actual damage value and also do primal ancient not have forced maximum damage values?
I have included a screenshot of the side by side comparison

Things That Are NOT Bugs Bug Report

“Migration from Old Forums” Since I see so many of the same exact posts for the same exact “bugs” that are not bugs, here’s a short list of things that are NOT BUGS so don’t post about it. Will be updated. Handy Link as well to posts. Also if anyone has anymore to share (looking mainly for common not bugs) ill update and provide credit. NOT BUGS 1) Gem Level Requirements for Season Journey: Urshi has to see 3 gems above the required level at the same time. If you used one as an augment o…

Never change the first of the first damage stat. NEVER.

The point is not that you did or did not enchant the Weapon Damage off.

You can test this by re-rolling the Percent Damage on the Primal to the maximum Weapon Damage.

Best case scenario would be to have both, Percent and Weapon Damages on your Primal. Unfortunately, you will have to sacrifice one of them.

And, just in case the Weapon Damage does less Damage, which I doubt, you can always enchant Percent Damage back. (As you said, it will always roll max stat). 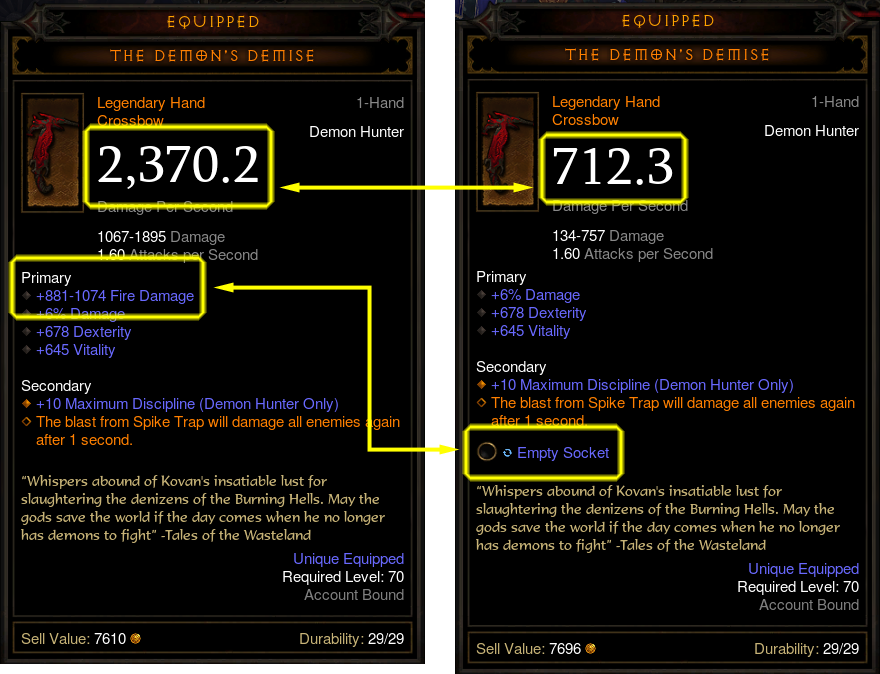 i moved this thread from the bugs topic. sorry i’ve been in diablo 3 for a little over a week(a friend of mine has recently rejoined from years ago so he was uninformed on this issue as well but has helped me progress into getting primals)
Plus the searches i did were far less than helpful and i did not know how[or where] to dig this info you’ve shared up(I.e. i didn’t even see sticky topics on the bugs pages to know i should read them)

A last and little information:
Don’t care about elemental damage on your weapon

Now that you know about not rolling off the elemental damage, you would have been better off rolling off the vitality into 10% damage. That would have left you with a weapon with 10% damage, dexterity and 24% area damage. The more paragon you have, the less important main stats like dexterity and vitality become as you can allocate paragon points to make up for it being missing on gear, in order to get offensive stats that you can’t otherwise increase.

Don’t care about elemental damage on your weapon

YES! This is very important!

But, Weapon Damage range does not matter what Element Damage is specified because it’s just extra Damage. A LOT of extra Damage, as seen in the image I embedded above.