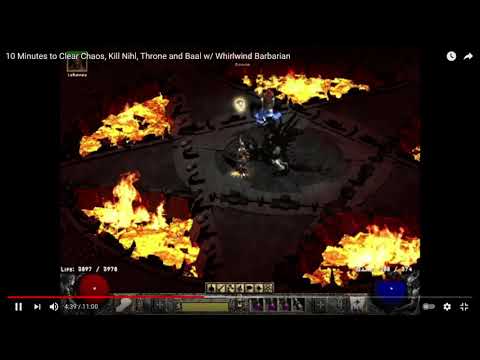 I would love to see his equipment set up.

I really hope D2R can overcome its current limitations, some self imposed, because it would be fun to get back into it from scratch. Rebuild the whole mule army again without having to continuously perm them all.

I’m bringing up another barbarian, this time using the Immortal King set. I just started hell Act 3, and the character is currently clvl 84. I easily soloed act 1 and 2 on /p8 with the set. I’m using the same damage philosophy I applied to the character that killed Diablo in less than a second. If I can do the same thing with the IK set that only has 5K whirlwind damage, I’m going to create and in depth build video guide. Right now, I have the IK set killing faster than my whirlwind Grief barbarian. If I kill Diablo in 1-2 seconds with IK, I’ll post the video.

Ebotd tm and I’m assuming you got a deadly strike on each hit frame of ww?

Hell D has like 113k hp so i’m guessing each hit was a crushing blow, deadly strike and the near damage cap of a thunder maul.

Merc landed the first CB and my first hit was CB, the rest was damage.

I’m assuming you got a deadly strike on each hit frame of ww?

How is that possible if CB is landed? How is it possible to know when DS is applied?