“Our team of artists has remastered this old-school ARPG with the graphical fidelity of the current generation. They’ve taken great care to advance the visuals of monsters, heroes, items, and spells while preserving the familiar aesthetic of the original. We hope Diablo II: Resurrected reignites treasured memories of gaming’s past for veteran players. For new players, we hope it captures the same wonder and awe felt by fans two decades ago.”

For me, in between the lines says: models are fine, no changes will be done to amazon’s age, assassin’s ethnicity, or everyone’s old depression face.

They changed a lot of the graphics of items and spells acording to player feedback, and I believe it’s very likely that more will be changed. That is the easiest thing to change (simple 2d graphics), so it makes sense to me that they’d address it first. Those changes are things that I’ve seen specific complains about (I myself agreed about some of them, like the Blizzard animation that was pretty underwhelming compared to the CHOMKY ice meteors of the original) and were addressed in the way that the feedback was presented. Character models are a bigger change, and I think that if you keep being vocal enough about it, it is not unlikely that they will change it. And always remember that a beta is not always representative of a final product.

Hell, I’d doubt that they’ve seen only the complaints about things like gem graphics and not the huge ruckus about the Amazon

TLDR: keep being loud on the forums, it seems to be working

as a 3d artist i always ponder if 2d is really easier than 3d.

Well, if they can reuse elements like rigging and such, it should be faily easy to redo the 3d, but simple icons like those I believe someone skilled with vector or photoshop or anything like that can get done in half an hour

no word on character model changes since february tho. i don’t really think they CAN’T change them, like i’ve said it’s a super easy change. it’s more like they don’t WANT to change them because social justice. i can really say anual raping crimes will be less when manazon arrives in september, you’ll see.

I honestly don’t really think the SJW thing is that much true in this case considering the type of content creator they paid to promote their alpha. Could be though, they could be hypocritical enough to do a collaboration with an anime girl with bouncy “features” despite wanting to pander to those audiences, idk. As for the silence, unfortunately they never say anything before they actually do things, it’s classic Blizzard. The biggest example is how they consistently dismissed the notion that they were ever gonna make vanilla wow servers, until the day they actually announced WoW Classic, or even, that “there are no plans of remastering Diablo 2” until they one day announce D2R.

I’ve had multiple discussions with folks about d2 being re-done. Some of those run back 2007.

Blizzard was always a display of authoritarian social controls. They, never tell the end user; any more than a very simple version of why, if there is ever one delivered.

Once we all saw the real money auction house in D3, the loot boxes and simple gameplay of Overwatch, and then the incredibly cheap game model of Hearthstone. How could more simple models not be applyed to the IP that blizzard holds?

This has been coming for a long time. The reel question is why did the Call of Duty recyclers take so long to do this?
My money is on a legal right, held by ‘someone/something’ that had to be bought out, or expired. Of course the very wild speculation is that the 3rd parties had influence on the IP, and while they could be used as valid money laundering/creation vehicles - they need a reel game to do so.

an anime girl with bouncy “features”

aren’t them all bouncy? anime-wise i only know either old school anime (like mazinger, voltron, macross) or bouncy characters (everything people at conventions consume) is there an anime girl without bouncy features? wait, im not sure i want to know and i don’t want bouncy features on D2 either.

aren’t them all bouncy? anime-wise i only know either old school anime (like mazinger, voltron, macross) or bouncy characters (everything people at conventions consume) is there an anime girl without bouncy features?

There is a whole archetype of “flat” anime girls actually but that was not my point. They already used one such girl to advertise the beta for the game. Doesn’t sound very “social justice” to me

Couldn’t care less about it. Grandmazon isn’t pretty, but she does not have to be pretty to farm cows in hell.

Imo: We are extremely lucky, that we are fans of a game, that has been outsourced to a very sophisticated and well working team, to be remastered. Let them be creative with their personal interpretation of the models. The character classes did always differ from the official webpage, over concept arts and the camp fire, to ingame portraits. (And btw, look at the old barb ingame portrait. The grandmazon is a good trade for that)

Unpopular opinion: Blizz is bending in for the Chinese, so they could sell their games there, but the country has stict censoreship laws.

Blizz is bending in for the Chinese, so they could sell their games there,

The censorship issues in China are for blood, gore, depictions of death, and political things. Chinese female chars are rather revealing and often overtly sexual.

So Blizzard is NOT removing the blood, gore, death, and religious themes - which China would require. They have slightly modified some armor or faces which China does not require.

I get it that some people like to use “China” as a buzz word or excuse for all bad things, almost like a meme, but this is not a good one. It makes no logical sense.

China Joy is the biggest Asian video games conference and is held in China. It starts tomorrow, but you can look at pictures from 2019. I can tell you right now that sexy and women in small outfits is a huge part of it. China does not censor skin on women. Arguing that Blizzard is appealing to them by changing chars to be less sexy, is backwards.

Ok. Than theres no real reson why we have ugly characters, and less revealing armor. I mean where’s the edgy gothic dark fantasy mainly for adults, as in the original?

Did the women change a bit in the beta from the alpha? I think I saw on a sub that the amazon model was changed a bit in game at the face and at the thigh pads. Does she look the same at the campfire? I haven’t seen the assassin.

a little. but not enough IMO still looks manly.

Unpopular opinion: Blizz is bending in for the Chinese, so they could sell their games there, but the country has stict censoreship laws.

Look up Azur Lane, and Muse Dash. Two chinese games . Now tell me if China is worried about sexy characters.

The amazon is wrong. They failed. The amazon is a young bombshell ‘warrior princess’ type of character, as depicted in D2 and all canonical art. Making her an aged man with breasts was a strange decision.

The sorceress was also younger and had a much more feminine face and frame. Now she looks middle-aged and more masculine, but I wouldn’t call her ugly. It’s still a beautiful model, but the point of a remaster is to REMASTER, not to change. She should be changed back to how she was.

The assassin was a goth. She had paper white skin. Her race is irrelevant. Make her asian to fill some quota or whatever their reason is, but change her skin back to being pale, and give her the old body back. Why is she now covering her legs? Why did her breasts fall off? Why does she look less athletic?

Is the general design choice at Blizzard that ATTRACTIVE = BAD?

If you want older less attractive women that’s fine, I even support that and would love to see it, but this is a remaster not a remake and not a new title. Put those models in D4 and give us good D2 models.

The barbarian lost too much muscle mass, he looks like a normal dude who lifts. He was a monsterous, super-human muscle-machine before. They could have at least made him look more like Arnie or something, instead of just a regular strong guy.

The paladin looks great, I like it. No complaints at all. Paladin is awesome.

Druid is a bit fat, the D2 model is clearly a lean athletic guy. This guy looks like he’s permanently stuck half-way into bear form.

The necromancer is perfect. They really nailed that one.

They changed the look of the amazon recently, as can be seen in the Amazon trailer. I think it’s much closer to the original than it was before. Still isn’t the most babe-licious beauty ever seen in a videogame but she definitely doesn’t look old anymore 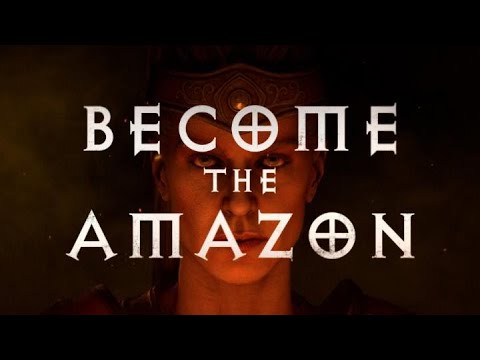