I hope it’ll start soon so I can get some gameplay done today. Due to real life commitments I won’t be able to play next time until Sunday evening. It’s 10.25 PM for me here.

If it would start 23:00 cet I could play an hour or two. But usualy I can’t stay awake and can only play the next day morning.

Can I have coffee instead? I’m not much of a tea drinker.

PTR 2.7.3 is now live with players able to update the client. Please note that that PTR Copy is currently not working as intended and is under investigation.

We will share updates on this as they come in. Thank you for your patience on this.

thanks for the update, it literally crashes my game every rift i finished! love this amazing new patch! keep making this game worst, by not listening to your fans.

it literally crashes my game every rift i finished

Meanwhile, in the stickied thread over on the PTR forum…

What are the starter sets for next season? I’m pondering what to play.

Well that was pretty fun the nightmare thing seems like it’s going to really take off; hordes of mobs all trying to kill you; peak excitement

If they can incentivize HC content at character level I’m sure we’ll see an increase in player engagement and participation.

From one analyst to another, you might be thinking too much into HC mode. It’s just the standard game but with perma death… you either want it or you don’t.

For example, at the current time, due to responsibilities around the house, I need to step away from my PC at any instance. In HC, my character will die if I do this (especially when I’m in a group). As such, I no longer play in HC mode. You couldn’t incentivise me to play in HC as, with the nature of the game mode, I wouldn’t get far based on my current point in life.

In the past, I gamed almost exclusively in HC mode on my alt account. But that was a time when it made sense to. I could sit in front of the PC uninterrupted for hours. Can’t do that anymore.

Other players, it’s a matter of whether they like playing with the risk of perma death looming over their head or not. Some players love it, others just don’t like it and no amount of incentivising will make someone play a mode they don’t enjoy. My wife doesn’t like chocolate for example. I don’t try to incentivise her to eat… she just hates it. But when I get cake, I can get two slices of different flavours if I really want chocolate.

How does it work in HC mode?

I switched over just when the servers started going bad, so I haven’t been able to test myself. What I do know is that it seems you build up the overwhelmed bar when you take damage. And unfortunately, you can’t teleport out of the new mode. And there doesn’t seem to be any end to it otherwise.

How does it work in HC mode?

No idea. I don’t have the time to test out the seasonal features (don’t have time to level up and find new gear). I normally just test out things accessible in NS.

I’m curious to know how this works in HC too… if the whole point is to get overwhelmed to the point one dies, then it better not trigger perma death. 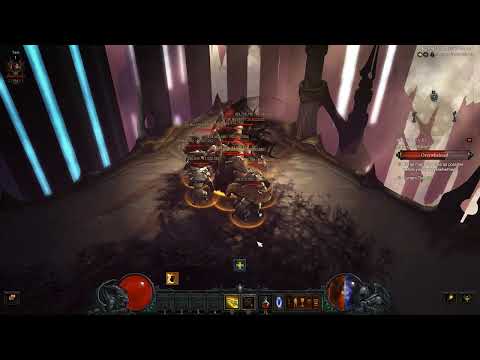 This needs to be fixed, or the seasonal buff is useless in hardcore.

There are only two ways to survive.

I don’t play HC but I do agree, this must be fixed. Taking fatal damage should not kill the player at all.

Hopefully this is just a mere oversight.

LOL. OK, those of you bagging the devs for making a non-HC friendly end game mode as the seasonal theme, it was justified now that we’ve seen the results. I didn’t think they’d forget about HC players… but here we are.

Best to post this on the PTR feedback forum as a new post if you haven’t already.

Hopefully this is just a mere oversight.

Hopefully… but quite a big oversight still.

Raekor Barbarian:
Raekor is a charger, right? Then let do the Furious Charge deal the damage! I would like this play style, but you often force us, to use only one skill / build! Why? I don’t want to throw rocks… I want to charge!

By the way, why there is the 4-piece bonus 1000% dmg for FC? Is it matters somehow? Or is it just sit there useless? (In this new rework.)

Invoker Crusader:
Happy to see, you rework the damage dealing method! It’s really great! But, let’s talk about the damage reduction method. In this “original” thorn build, what is the Bombardment right to exist? Why are you attaching damage reduction to it? Here is my suggestion for damage reducing:
If you have at least 1 thorn stack, (from the 2-piece bonus) your damage reduction is 50%. For each additional stack you gain +2% damage reduction.
I think this or something like this would be much better.
(Sorry for my english.)

By the way, why there is the 4-piece bonus 1000% dmg for FC? Is it matters somehow? Or is it just sit there useless? (In this new rework.)

The 1000% damage on the 4pc was there previously and is important to keep the IK6/R4 charge barb build viable, though, who knows for how much longer. But it’s useless for a pure R6 build.

The new R6 mechanic looks pretty cool but I’d have preferred it on one of the support legendaries. This way, it could apply to MotE too.

Personally, Barbs only have 2.5/5 sets that do it for me. I love IK, MotE is interesting and makes sense, and WotW is fun once geared up (I just hate using it to gear up).

H90… I hate managing stacks and this set is too narrowly focused. It should have supported all primary skills plus Ancient Spear, Overpower and Revenge to satisfy the ranged barb fantasy properly, and round off on support for remaining spenders. They’d do away with stacks and DR would be active as long as one of your Shouts is in effect.

R6… needs to have charging as a significant damage dealer. You think they’d have learnt how unsatisfying it is for the enabling skills to be nothing more than a flick after how much happier M6 players were after sentries were added to the 6pc damage bonus. If they want R6 to support Ancient Spear, that is fine, but at least make FC do some damage still. But if they want R6 to satisfy the ranged barb fantasy, it falls well short. The ranged barb we all have in mind is Weapon Throw + Ancient Spear… which my suggestion for H90 would achieve.