Three Versions of the Artwork:
Version A:

This is a story about an artist who made wallpaper artwork for 13 years. Tried to sell one of those pieces of art but asked advice from a friend. The art in question was made 11 years ago and it was my Kal rune. But this artwork couldn’t be sold because it had the diablo 2 & 3 runes around it and those were Blizzard’s property. A grey area for fan art as it were.

I would keep that idea in the back of my mind for the better part of 10 years. Every few years I would update the avatar but it would go from Diablo 2 runes to a mix of runes throughout Diablo 3 & the Books of Cain and Book of Tyrael. Most of those extra runes were either cultist runes, monk runes or other runes from throughout the books. I just wanted to flesh out the rune-circle to have as close to if not more runes than the original 33 and later 38 with the first iteration of the diablo 3 runes.

It wouldn’t be until the first weekend of 2021 that the spark for my new runes would ignite. I always knew they would be these Ancient/Modern “Diamondian” Rune/hieroglyphs. These runes were first made back in high school (circa 1997) on a paper created binder that if you cut it out a certain way it would be like creating a binding for a book without the glue and everything else. I was always inspired by other worlds and stories that had new languages spoken and written. Like Tolkein with the elvish language in the Lord of the Rings, as well as say the Klingon and their language as well by Gene Roddenberry from Star Trek.

I was lucky though. The original iteration of these runes/heiroglyphs I had taped a clear 8x10 paper sized plastic sheet one you’d use on an old school lamp projector back in the late 90’s I know I am old but its whatever. I had taped it over the top of these runes protecting them from being rubbed off and also from fading. Somehow the tape still holds up 24 years later. They don’t make it like they use to (haha emoji).

Anyhow I digress I used these runes as references for the final version of the Runeweaver’s Kal. Each Rune has a word meaning that almost mirrors itself from above to below. With natural elements as neutral in betweens on the sides. Also the top runes have circles that represent Good/aspects of good. The bottom have diamonds for aspects of bad/evil and their aspects, and the elements have triangles in them for neutral aspects. 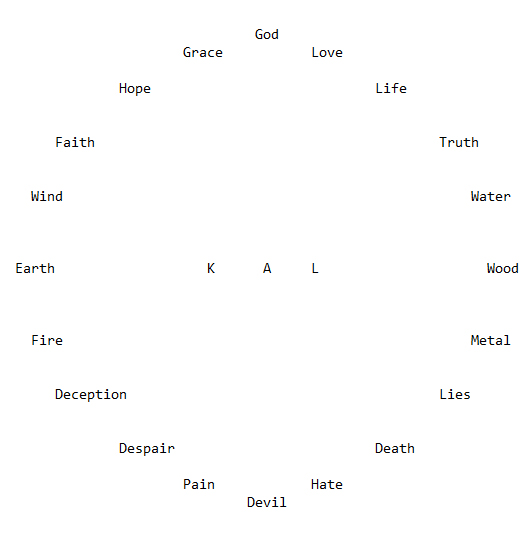 As this shows most of every runes save for the elements to an extent are the opposites of one another. Even then most of the elements compliment each other as well as the sides they are closest to. Like wind makes me think of heaven and fire makes me think of hell with earth being the most neutral in the middle. That in a way for Water complimenting Wind and Wood for Earth since plants and tree come from the earth and metal for fire since you need to heat the metal to make it into something to protect or to destroy. I made it leaning towards the bottom though.

This piece of artwork has become one of the most meaningful pieces of artwork for me personally in over 20 years. It is the culmination of what I started creating 30 years ago as well as my life’s experiences that have tempered me along the way to now.

As I started this with; this will be a year of full circles. Not just in rune-circles but in many ways. A friend of mine started in an industry as an artist for a crew on a TV show. Then joined some forums, and helped a community with a gaming company. Later make videos for that company and later come full circle with being an artist again on a game team. It was the same with me. I started creating this avatar back in 2010 wondering if I could sell it to make some money to help take care of some bills. Then come 11 years later that came full circle today with the completion of the Diamondian Runeweaver’s Kal.

If you stuck here til the end. Thank you. This went on a long time but the story behind this piece has a history I will cherish and I’m happy that Diablo 3 is in there somewhere. Which is why Diablo 3 will always mean a lot to me. Not only as a game but ALL of the people I have met online and the friends I made along the way. I hope one day to finally meet you all at a Blizzcon someday (Covid-19 not withstanding).

Thanks everyone for 13 years of Runeweaving.