Hey everyone, I am sharing my Necromancer all ubers speedrun which is completed in 2min 37 sec. I am using a heavily golem oriented build for max dps. I would be more than happy to answer any questions you may have. I hope you enjoy the vid. 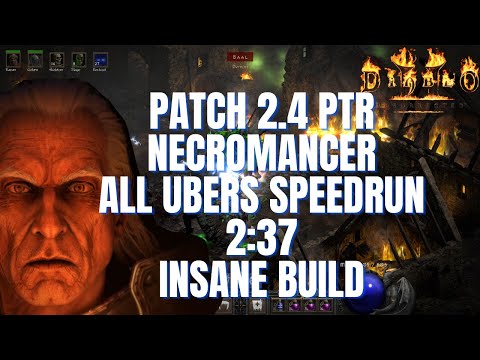 Got a little side question.

Have you tried the thorns in general farming using insight ig and seeing if those points have any effect in those areas at all?
(I’m saying insight ig since I can’t stand mana issues to be using pride in general play

I’m wondering how you get thorns in that case. I tried out a thorns mercenary but I felt it was underwhelming vs a might merc. I remember back in 1.09 when a thorns merc was the way to go and I’m far happier with might as I had trouble killing ranged and caster monsters back then.

I believe it’s possible to make a bramble out of a metal armor and turn it into an IG. that gives you an IG that gives everyone thorns it it comes at the cost of a better IG.

Have you tried the thorns in general farming using insight ig and seeing if those points have any effect in those areas at all?

I tested that earlier. Insight IG soloed Baal wave 5 with good points investment. No joke. It single handedly destroys Eldritch pack by itself on P1 Hell.

I remember back in 1.09 when a thorns merc was the way to go and I’m far happier with might as I had trouble killing ranged and caster monsters back then.

IG is very effective vs melee attackers. It doesn’t have the OP damage vs casters. One thing I noticed is Amplify Damage actually provides a positive synergy for IG. I still need verification on this but I observed this in multiple instances.

Yes that’s possible. I do think Pride IG with Skeletons still provides higher damage output though. I agree about the cost perspective ofc.

I still need verification on this but I observed this in multiple instances.

I’ll confirm this works, it always has and I verified it still does when I tried out the thorns merc to see how the changes are.

I’ll have to play with the IGs/Thorns more. My testing of the new Thorns didn’t get that good of results. I like the mechanic of always damaging the attacker and not needing to damage the target, the I felt the damage was low even when I used amp.

What did you make the IG out of? I just tested him and he got killed every time while barely doing any damage. The monsters were even healing through it.

20 golem mastery 20 IG I made 1 from insight ptr base item and pride ptr base item. I have the recordings of the test can upload as unlisted vid so you can check if needed.

Thanks, I made one and took him out for a bit. Very beefy but the damage was still not worth the 40+ pts needed to make him IMO. He did solo Shenk and Eldrich but when I took him anywhere else with ranged attackers he didn’t do much. I need to try a black runeword next

IG is effective against melee attackers as I said above, which is pretty much 95% of Ubers

Yes, it doesn’t do well against ranged attacks but I really like the fact that IG became a melee killer by itself

Instead of Black runeword, why not use Ber Ber Shael Ber Ber Shael on a 6 socketed metal weapon (edit: To check if IG attack frame can now be increased? You never know what could be broken with new patch) I will also try it to check CB. Let me know about what you found please!

Test 1: Okay so I tested a Gemmed War Axe 6 sockets on PTR with of course 4x Ber 2x Shael. This gives 80% CB and 40% IAS. Gemmed War Axe was the default PTR base so I did not bother. IG IAS did not increase as expected. Iron golem skill level reached to level 40 with CTA buff + Arm of King Leoric (hoto for golem could have been better for 1 extra level -Arm gives mostly +2 summon rest is skeleton whereas Hoto gives +3 skills so hoto is better for summoning Iron Golem but oh well). Anyway long story short Iron Golem LITERALLY soloed Baal on Hell players 1 in 3 minutes. IG had the benefit of Fanaticism aura from my beast and amplify damage curse on Baal. I recorded the fight. Let me know if you guys want me to upload it and I’l see what I can do.

Test 3: So I used the PTR unsocketed IK Maul (which should have 2 sockets) with 39% CB and used a Ber Rune. I then transformed this item to IG. Soloed Hell Baal in 2 minutes by itself.

Inspired by your post and videos I tried to replicate this build on PTR. I did not see impressive results on the thorns aura at all… I tried the IG itself, and with Bramble on myself. The mobs took really long to kill. I tested this in the second round of PTR, when Thorns was supposedly buffed up.

If I recall correctly, I played around with several different IG weapons. This is partly due to the IG dying, partly respecs. I tried Ubers with having the Golem as a source of Open Wounds. This didn’t seem to work at all - like his hit rate was horrible or OW not working on IG.

Are you sure the IG is as much the source of the speed you are clearing Ubers with as you think? Not simply other factors of the summoner build? If you stand by the IG, could you offer a structured deep dive into how it works, and in which setups he is viable?

IG attack frames are limited as you know. Therefore, IAS or higher fanaticism buffs do not matter that much, other than just speeding up the attack animation. There is a fix duration between the attacks.

When you combine Pride with Fanaticism, your mercenary and all other minions deal super high damage. Also ,your IG thorns reflects flat amount of damage (now also buffed by % damage as well) and this benefits from Amplify Damage. On my previous tests, my IG easily soloed Hell Baal (with amp damage up).

Let me know if you’d like to know more.

Hey I like to ask. if I use insight IG, my merc is with infinity and I holding beast for fana aura. Would it be better?

Infinity merc is good, beast for necro is good. However Insight IG does not add any damage at all. Insight helps with your mana. For pure speedruns maximizing damage, Pride IG is the best option. You can use 1-2 mana pots to take care of mana issues anyway. However if you want overall quality of life, then insight IG can grant that comfort, which helps with mf runs etc since you’ll be using corpse explosion frequently.

Thank u for the advice

Have they fixed IG at all to fix despawns when you get too far away?

I’m currently jumping back and fourth between sorc and necro. Do you think its possible to just main necro or is it key to have a MF sorc to fuel your necro?

IG has damage reflect thorns aura. Merc is might.
It depends. If you like to min/max everything you can play necro. If you want to press buttons and kill enemies fast then sorc should be for you.