The largest content creator joined our community to try PVP in a tournament setting. We teamed him up with some of the best players to give him a taste of what we love Diablo 2 for.

He had a blast.

We also dueled last night as well if you caught his stream. I hope to see him more often, he was doing extremely well!

I would 100% suggest trying dueling, it’s a great chance of pace from mfing/pvming! If you have any questions definitely ask me and I can point you to a great starting point. 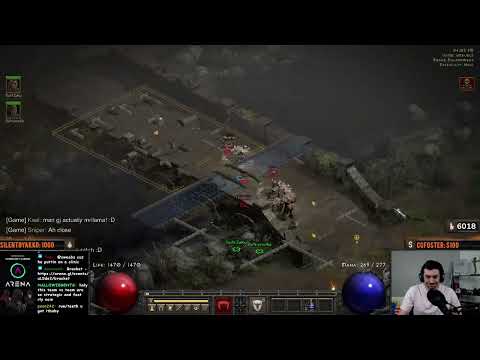 Grats!
I’m happy for your excitement
Watching that video just confirmed its a pvm game for me though
To each his own!

Yeah its a pvm game at heart, and rich people or streamers enjoy to show off the gear in pvp. Have fun though.

We teamed him up with some of the best players

I watched some of it too. PvP in this game certainly has dimension to it!

HC PVP doesn’t even exist, kid… If you call pking random people on public games skilled pvp, then I guess.

what are you talking about… People in hardcore never do serious pvp, how could they be better at it that people who play pvp all the time…?

There is not real pvp on hardcore, its mostly player killing or trying to find some sneajy way how to kill other person in 1v1. With enchant or something. Good pvp on HC is pretty much nonexistent.

That’s only because PvP is at its peak right now. Also, no one denied PvP can not be fun, but it’s just a mini-game. It’s fun for short period of time every once in a very while.

Unbalanced, non-skill requiring (best gear wins), broken mess (still today) and just a mini-game to not be taken seriously. Much like D3 brawling.

Good that you wrote content creator cuz he is terrible player

To be actually honest, the difference in his gameplay skill from the start to end of night for the fun duels we had two nights ago was amazing to see.

He looked at each situation where he died or got caught and adapted instead of saying oh well, that is OP/broken. He’d ask a question, or if I killed him, I’d give him tips on how to potentially avoid that in the future and I’d notice he would try it next time around. Very open minded person which is rare.

I wouldn’t slight him entirely tbh, I was pleasantly surprised.

look at how cool you are!

Our lord and saviour MrLllama - hopefully he’ll stick with pvp and maybe influence some changes.

He’s 20 years slow and a PvP noob like many people on these forums who thinks PvM is the hardest thing in this game… HC PK and SC PvP are the most enjoyable things in this game.

That may be the case in D2R, but it was not the case in D2LoD. There was much pvp in HC, particularly at lower levels. And many times at high levels pvp would organically begin when someone decided to hostile a group. Until the hacks became out of control, pvp was the bomb in HC.

These days… i can see the player population not even trying it. Made up of a bunch of wussies now. HC itself isn’t even pushed by the devs, even though it was originally intended to be End-Game. I honestly think they don’t even play the mode, themselves, and wouldn’t have included it if not that it had to be included.

Anyways, it’s good to see PvP get some love by the streamers, at least. Even if it isn’t HC.

There was much pvp in HC, particularly at lower levels.

I was dueling on hc in old d2 but it was nothing like sc duels. It was often just about some sneaky way how to kill other person. Basicly suprise kills than kills about skills.a lot if people also cheating with chicken and godmode.

what are you talking about… People in hardcore never do serious pvp, how could they be better at it that people who play pvp all the time…?

tell me you dont play hc at a high lvl without telling me.

I have literally pvp’d in HC for the past 10 seasons you donk. We just dont make YT videos for clout and stick to private rooms. JSP has a gigantic pvp community you’re just not a part of it because you’re a care bear sc player.

Pvping and rebuilding has been on the scene forever you guys are just forever SC
babies.

That video was some of the worse pvp in diablo I have ever seen lol. Good on him for starting to learn tho.

the art of pressing escape and clicking

smh HC PK & SC PvP is not comparable but they are both fun and both things most noobs on this forum never get into because they think PvM is the only thing to do in d2… pointless to argue, anyone who is super into either posts in legit dueling section at d2jsp…