It is extremely wasteful of old content to act likes its a prestige to happen to play at the time. Just make it scaled so it’s always the same difficulty. All players have to earn it still.

I bet they were the same 5-6 people that highjack post, jus to oppose new opinions

But I think it’s a bad idea to talk about this any further in this thread.

It is extremely wasteful of old content to act likes its a prestige to happen to play at the time.

Respecting the efforts of Players during a moment in time is not necessarily always about prestige - although it can be.

The “Black Harvest” title, for example. I would like it - even if I rarely used it. The Warlocks who have it put in the effort at the time.

I was almost virulently opposed to playing a Warlock for most of my WoW days. I didn’t play mine very much until the title was unobtainable. I likely was subbed at the time that content was live - so it isn’t simply that “someone happened to play at the time”. I was playing other classes, I didn’t play a Warlock much, and I didn’t think to do the effort. And now it is gone.

You can get the green fire - and that is nice. But not the title. I am OK with that.

I don’t see it as wasteful. There is nothing wrong with providing content and rewards for a limited amount of time.

This whole Mage Tower argument is curious. I was around at the time. I got the ones I had time for. I didn’t get all the ones I wanted. I got 3 out of 4 of my Druids Challenges done, but I didn’t have time for the Feral one, as I waited until the last minute for a lot of my Characters.

My Druid Main is incomplete. He only has 3 out of 4 Mage Tower appearances. The Feral one would be great, especially now that you can mog forms a bit more freely. And I am OK with that.

Maybe they can do a Mage Tower Time Walking thing, with a different tint or coloring or something. But the rewards shouldn’t be the same for different challenges.

I mean, heck, they took away interrupts from every healer except Resto Shammys. My Resto Druid used Solar Beam to interrupt, and he doesn’t have that, anymore. These new “Timewalking Mage Tower Challenges” would not only have to be scaled, but reconfigured to the point that they are different Challenges.

Ion is personally responsible for the state of the game being highly skewed towards esports and M+ since he was promoted in WoD and it hasn’t be making the game better but making it worse.

First time I’ve seen someone say M+ was a bad thing considering the general viewpoint of ‘keeping content fresh is the only way to keep the game alive’.

Nah just use templates of how the characters used to play

true, and what a shame; most people seem to always claims “gameplay” made wow great…

But they all seem to forget… lore, fantasy, artstyle and everything else, had a major role in that, without the lore especially, the game wouldn’t be where it is or was in its peek time.

Wow greatness has a lot to do with Warcraft RTS, and it is becoming a fact.

eugh, glad some people can think that.

Respecting the efforts of Players during a moment in time is not necessarily always about prestige - although it can be.

My issue is them cutting content to artificially create, ‘Prestige.’

The Mage Tower appearances are one thing. Another is the MoP Legendary Cloak questline, or the WoD Legendary Ring questline. In those case in particular, it’s not just these items that have been removed, but also the quests and lore connected to them. In the case of the MoP cloak there is a place in the game players still cannot access if they never got one.

Transmog is an integral part of player experience, of customizing one’s character. No transmog appearance in this game should be impossible to obtain. That’s my two copper on it. Prestige should come in the form of titles, or being able to show off using something first before it becomes trivial by a new expansion.

I got the 100 Exalted Reputations mount before BFA ended. Hardly anyone had it. I’ve seen a lot more people with it now. I don’t care in the slightest that they had an easier time getting it, not having to grind some truly mind-numbing reps like the Goblin Cartel from Vanilla.

In those case in particular, it’s not just these items that have been removed, but also the quests and lore connected to them.

There’s a bunch of stuff they removed when they didn’t tell people they would to start. And they should put those back.

Having said that, their argument on the Mage Tower was making time limited content in the context of what was going on in that Xpac, where they were also already putting extra time in the Artifact appearances.
They are unlikely to change their position on those looks. They believe them to be linked to encouraging people to play specific content in a specific time (like Ahead of the Curve).
It would be quite a haul to convince them that it wouldn’t be detrimental to their game theory views to open them up as they are. The road most likely is lacking effects and with different colors.
I think they feel that the players talking so much about the Mage Tower looks confirms they were right in their approach.

Players should probably convert their discussion of Mage Tower Timewalking to needing Blizzard to add looks over time to make it actually evergreen. It was not such when it was in game originally, and it won’t be with a class set recolor either.

And the standing philosophy of the past 20 years, of Gameplay (and the Elite Gameplay People therein) before all else is no longer sustainable for WoW.

They never followed that philosophy.

Oh nice, now if only la roux and the other god awful writers would leave maybe the story could be saved. Also the game isnt dying cause of mage tower you’re delusional.

Honestly I’ve never really had a problem with the removal of “prestige” rewards. If they want a Legendary or a special Transmog to be limited-time, current-expansion-locked, so be it.

What infuriates me is eradicating entire swathes of story to do it. The Cataclysm Legendary Dagger quests, the MoP Legendary cloak quests, the WoD Legendary ring quests, Legion’s Mage Tower quests; the latter in particular contains several important story beats that wrap up zone storylines. Storylines that go unfinished for anyone who didn’t get to do them in their proper time.

Just swap out the Legendaries for lesser equivalents or story-flavored greys. Or a heap of gold. Or some lesser “I finished this questline after it was content-relevant” achievement. This business of gutting entire swathes of story content for the sake of keeping the rewards “special” is just sloppy and needless, and prevents anyone from ever experiencing the whole story ever again just because they want to keep some item exclusive that isn’t even viable for use in play any longer. 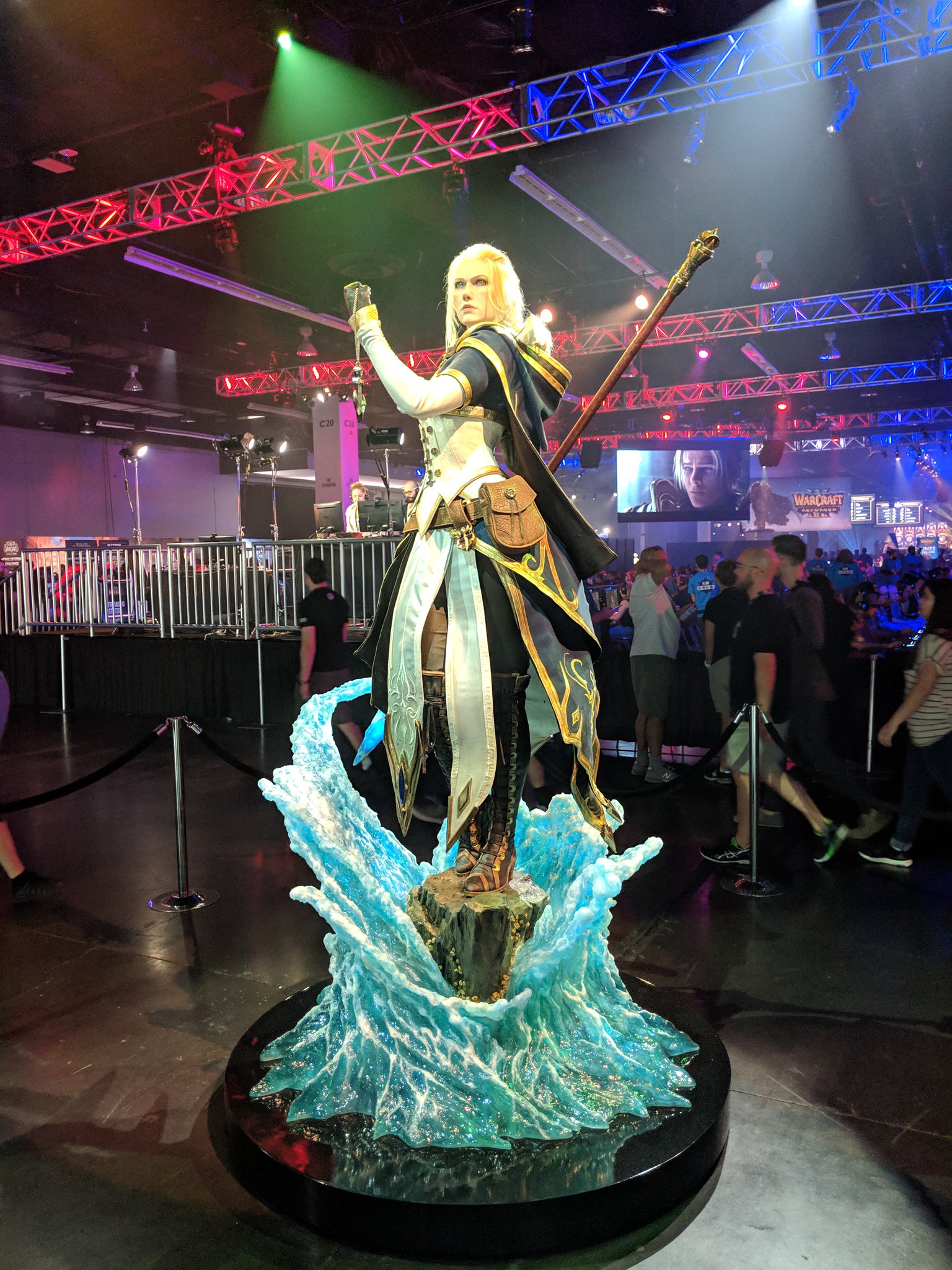 @RoBrooks13
Friday was my last day at Blizzard. For almost ten years I’ve had the chance to work alongside some of the best designers, artists, and technical wizards in the universe. I’ll be forever grateful, both to my coworkers and the Blizzard community, for countless good memories. 💙
10 Likes
Zerde-sargeras (Zerde) September 27, 2021, 10:40pm #37

He has authored alot more then that. Man, I remember asking him about if the Alliance would get Pandaria short stories.

I sometimes forget how long WoW has been going on.

Curious. I wonder how and why that occured.

It doesn’t look like he was purged in the righteous fire. Possibly he was removed for creative choices? It appears like he left of his own accord. He talks about believing the victims and stuff. I get the impression he didn’t want to be associated with the company.

Anyway, I liked A Good War.

Brooks didn’t only write for WoW, I doubt creative choices would be the issue. My personal impression just based on his own tweets about it and a comment made by Jeff Hamilton after Hamilton re-tweeted Brooks is that he may have chosen to leave because of the all the stress of the last few months. He wouldn’t be the first person to leave Blizzard for that reason if so, there’s been other employees across the company who’ve chosen to leave for that reason and have said as much. I’ll miss seeing new WoW stuff from him; in addition to the already mentioned stories, he also wrote the Legion audio dramas, which I quite enjoyed.

Honestly thought he quit a long time ago but it might be burns i was thinking about or Neilsson.

I just know that those 3 were good and loved on the lore team.

Which is hard to say for the rest.

While his departure could be nothing more than his contract expired or a statement of support for the victims in the lawsuit, why purge his Twitter account?

I’m also getting a “rats leaving a sinking ship” vibe from not just WoW, but the company itself. Given what they’ve done to their other games WoW is Blizzard’s “hill to die on”; they’ll abandon their other games end as long as WoW continues… and if WoW is abandoned, the company’s done.

By the way, while I do like this Mage Tower mechanic I keep hearing about, it sounds like a fun version of Torghast.

To be honest, I’ve had the impression for quite some time now that the hands of CDev and the writers are tied and they’re forced to tell whatever narrative marketing thinks will sell, rather than the stories they want to write. Authors may be able to sneak in passion projects in the form of moments for specific characters now and then, but if Marketing tells them we need WoW’s version of Thanos collecting WoW’s version of the Infinity Stones, then no matter how much those writers know it’s not going to go over well with the players, they have to write it anyways.

I think you’re onto something there. It reminds me of what happened with the Mass Effect franchise after Drew Karpyshyn left (though Bioware/EA had more talented writers still there at the time).

Because social media is a two-edged sword. Its just safer to purge it, or not have one at all for a lot of professional work.