Honestly i can flush your ideas to toilet.

With that enormous amount of feedback to remove crap void form, you asking how to make vf fun?

Remove void form and all spells attached to it, bring back old shadow as it was prio void form.

And mine is that, at that point you have done a mechanical overhaul / rework. Whether the buttons / buffs keep the same name or not is irrelevant. If we believe we are past the point where blizzard are going to do a rework / mess with resource systems (Which bliz said themselves was the end of alpha), then it doesn’t matter

If your solution to fixing voidform involves changing the mechanics and interactions which have defined it for the past 4 years, then it is the same as removing it.

So I don’t believe these changes would actually be a rework. A rework would be designing new mechanics. I’m suggesting we simply tweak the numbers on mechanics that already exist so that it plays more closely to Fury. Number tweaking is still on the table I believe

First off, I don’t care where live shadow is at DPS wise as everything is crazy and unbalanced right now with all the systems on top of systems. I care about the baseline functionally the spec will be at going into SL. Most specs going into SL so far have everything they need to feel “complete” and all the borrowed powers just makes things better. The issue with shadow right now is once again you need legendaries, conduits, soulbinds to make the spec “function” at any level that feels “complete”.

Of those changes, nothing is addressing the core issue and that is with Void Form. The entire spec baseline toolkit and talent tree is build/designed around Void Form up time yet it doesn’t “work” and so far everything that “fixes” the spec is through borrowed powers and they do it in a way to not interact with Void Form because if it did… it would be OP because it will scale out of control.

Secondly, I don’t measure a spec that is clearly designed for 1 type of content to be good/decent in THAT type of content. I measure it in the content it struggles with and with Shadow, it struggles in SHORT duration fights be it PvP, Torghast, outdoor content or dungeon trash etc.

After considering those, the “evidence” that I would like to see is really something I consider impossible, this why I asked to see it because I can’t for the life of me see it working in the game for the reasons I have just eluded to because as long as you have a “ramping” mechanic in THIS GAME then it will not work because that is not how THIS GAME is designed around.

Think about the parallels between Rampage into Enrage and Void Eruption into Void Form. Both are builder spender, both give you windows of a haste buff, both are a minigame where you’re trying stay in the buffed state as much as possible.

I haven’t played fury since WoD. So does fury DRAIN away while your in combat and not able to press your buttons because your stunned or CC or the target is immune to damage? If so, then I find that odd that it would be considered “beloved” as you claim. If not, then NO it is not the same.

Shadow’s Void Form has many issues, not just ramp. But those issues will be less annoying to deal with if the ramping aspect was REMOVED so then your “windows” of power will always be at 100% power instead of maybe getting to 70% power only then you get CC or the target goes immune (cloak of shadows) and yet all your power is drained away as you cant “pause” the drain and even if you could, it would be clunky as heck.

Need more evidence to support that claim, because anecdotes are not proof.

Ramping mechanic in this iteration of WoW, with the rush burst style gameplay is sort of bad, he has a point…

Notice how Afflic Warlock suffered extremely in BFA M+, Visions but just like Shadow Priests did ok within raid, but Blizzard did amazing work with Affliction in Shadowlands Alpha/Beta that’s why I have hope for Shadow Priests.

But don’t get me wrong, with corruption both Shadow and Affliction can do everything currently.

I haven’t played fury since WoD. So does fury DRAIN away while your in combat and not able to press your buttons because your stunned or CC or the target is immune to damage? If so, then I find that odd that it would be considered “beloved” as you claim. If not, then NO it is not the same.

Actually yes. Its a buff that disappears after a few seconds of time. It doesn’t work exactly the same way but it shares a lot of similarities.

Warlock had Demonic Fury, MoP/WoD till prepatch used it, literally best Demo Warlock ever so much fun, dancing inbetween forms for the on demand burst… exactly like insanity really.

…having played both I’d say they are nothing like eachother. Except I guess that they both have a bar and a form you can go into. How they play / interact / what their strengths and weaknesses are from that point are completely different.

Enrage
Becoming Enraged increases your damage done by x%, Haste by 25%, and movement speed by 10% for 4 sec.

Okay.
Its quite a leap to make something like this work for shadow.

Conclusion:
I just think this is something that works fine for melee and instance attacks in short windows. But granting a ranged that has to cast spells and can apply to anything in a 40 yrd range will make it OP if similar buffs were applied OR annoying/nuisance to deal with if it was balanced to only abilities that cant be abused like dotting everything up… or dotting everything up then activating the buff and just get free damage buff ticking on all dotted targets for duration.
So it would only work with an ability that cant be spammed as it is restricted via CD or single target like Mind Blast, Void Bolt, Mind Flay.
This is exactly what one of my past ideas was, was to “empower” some abilities instead of x stats while in Void Form.

Stuff like that. Make your abilities “meaningful” in Void Form instead of a ramping stat/dmg mechanic that has no cap.

The two “shadowed” priests in the pic make me think they are going to be doing something with shadows of yourself somehow…idk. Hopefully its meaningful change.

The two “shadowed” priests in the pic make me think they are going to be doing something with shadows of yourself somehow…idk. Hopefully its meaningful change

I don’t think people should be reading into the specific image. It’s one they’ve used when talking about shadow before, as have many fan sites (It’s artwork from the WoW TCG so it’s art Bliz own too), and it’s just the top google search when you type shadow priest for a lot of people. 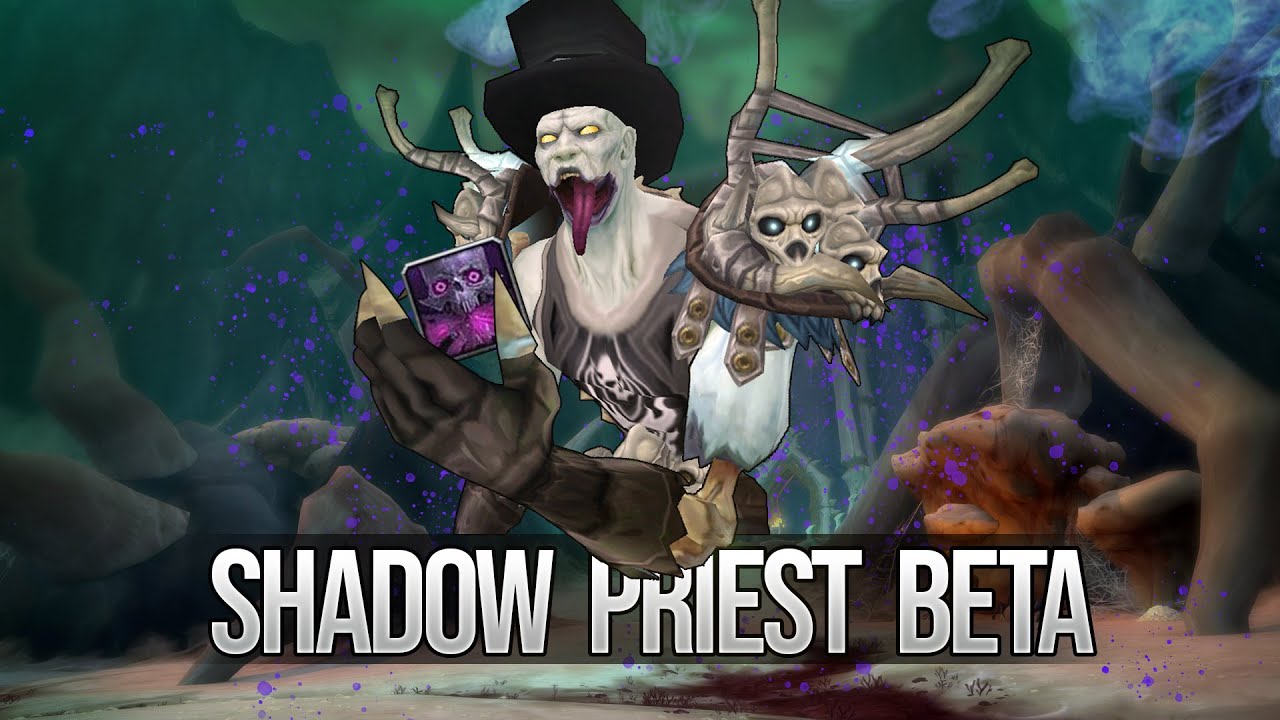 I just googled “shadow Priest” and I am shocked he didn’t use one of the many tentacled images lol.

I am shocked he didn’t use one of the many tentacled images lol.

Like I said in my post, the fact it’s artwork from the WoW TCG and therefor owned by bliz might have made it a better choice. He did the same with the more generic priestly image he posted at the start of Alpha.

I think it was quite funny that he didn’t have beta when they did this interview/made the video and mere days later, he got the beta.

I refuse to think it was a coincidence lol. He should have gotten into the Alpha imo. Not wait till weeks into the beta.

Shows how tuned in blizz is lol.

Ellipsis, do you know if their was a full version of this interview? I know a lot got cut but I did enjoy it and would like to see everything that was cut.

Also,
It sounded like he either didn’t want to remove Void Form or he just thinks its too late for that and didn’t really want to talk about it? I’d like to know what he thinks about it compared to past shadow iterations. Is this something you could answer based on your conversation with him?

Ellipsis, do you know if their was a full version of this interview? I know a lot got cut but I did enjoy it and would like to see everything that was cut.

We spoke for 3-4 hours. You can see the edits on the clock behind me

Also,
It sounded like he either didn’t want to remove Void Form or he just thinks its too late for that and didn’t really want to talk about it? I’d like to know what he thinks about it compared to past shadow iterations. Is this something you could answer based on your conversation with him?

The conversation was focused on the assumption voidform wouldn’t go away. I don’t want to put words in Anboni’s mouth as I can’t remember everything we said, but we both agreed the less relevant VF was for pvp the better, and definitely had fond memories of aspects of previous iterations.

Ok so to start I just want to thank you for actually engaging and having real arguments. I’m able to be swayed and convinced to your side of thinking if your argument are compelling.

Also, considering a rework is completely off the table, can you at least consider what I’m saying through the Lense of trying to make VF less clunky?

This is a problem every caster has right? Idk how to get around this aside from just never playing a caster spec. Getting knocked back and stuff is lass of a problem for ranged, right? And at least Mind Flay/ SW Pain and Void Bolt/eruption are instant

Currently its only activated by Rampage and there is a 30% chance to activate it with another ability called bloodthirst. It doesn’t activate via incoming damage to my knowledge but I could be wrong. I’m not super familiar with their borrowed power. I don’t think having a second button is a hurdle we can’t jump with number tuning but maybe I’m wrong.

Sorry, I’m missing the difference between this and Enrage. Doesn’t enrage also buff All of a warriors abilities?

So my counter arguments here ate that Warriors have great mobility and Priests have to cast which slows them down a bit.

So I feel like I need an answer to number 3 to respond to this because I think its our fundamental disagreement or misunderstanding. Doesn’t the voidform buff currently buff spriest in all the ways your saying it would be a problem if they were buffed that way? I’m not understanding you here.

Again, thank you for engaging in a dialogue with me