What the Flux are we supposed to do with Cosmic Flux?

So, we had a brand new currency added to this patch which is pretty abundant, however there’s not really anything to spend it on.

Sure it’s used to upgrade legendaries and to create items with the Creation Catalyst but you are still swimming in Flux after spending it on everything.

There are items from previous raids which are still desirable even today, however it’s not really possible to obtain them due to a couple of reasons:

During Legion we had a fantastic way of resolving this issue and FOMO. There was a vendor we could trade currency to get gear tokens which would be items from the old raids/world bosses.

This would mean that for example Rogues & Hunters who look to join the game this patch will not be permanently behind ones who played last patch as they will be able to obtain high value items from Sanctum of Domination. Tanks who start this patch are able to obtain Cheat Death trinkets. Additionaly it would serve as yet another source of catch up gear for those who still need it for alts or returning to the game.

Not to repeat myself too much from the Zereth Mortis feedback post:

Cosmic flux!.. I have more than 10 000 of it, and I don’t know if I’ll ever use any of it. As far as I know, it is only used to upgrade a legendary to its highest form, or change any season 3 item into a tier set. I’m unlikely to get either of them, as I don’t participate in raids, pvp or m+ to get tier-eligible items, and the legendaries are so expensive that I can’t justify spending so much gold on an item I know that I won’t need to do the content that I’m doing. Yet, I keep getting more and more cosmic flux, and a cool reminder that I’ve just looted it every time I open a treasure chest, kill a rare, or complete a quest. My question is, can we get to change Cypher equipment into tier sets, and could we get another way to spend our cosmic flux? (the latter also kind of applies to soul ash/cinders).

I’m now at 30k cosmic flux and still have nothing to use it on, and it keeps piling up :> It’s starting to get worse than soul ash, I have almost 70k of that from more than a year of playing Torghast.

I think gear from “old” tiers would be a cool solution to this. Even if you don’t need the catchup gear or other useful items, you can get some transmog out of it!

I’d also suggest letting us trade it for other useful items. The item that lets us add sockets would have been great to have, for example, or perhaps you could trade flux for other currencies like anima, cyphers, sandworn relics, and so on? It would be particularly neat if there was a way to use it to help alts along, a renown 80 boost, upgrades to their covenant sanctums, reputation boosts, the list goes on and on.

I honestly thought flux would be 10k per legendary at the rate it was given out. If they let us trade for sockets that would be a fantastic idea

Why not make Progenitor Essentia buyable with Cosmic Flux? I am currently sitting on 31k of it. As someone who doesn’t raid, M+, or PvP it really has no use to me. My only real hope of getting tier is getting lucky out of the weekly event and converting that piece of gear using the Creation Catalyst when that becomes availble.

By the time that happens tho, I feel like I could have upwards to 50, 75k flux? Who knows!

. So why not give the Flux more use? This would (hopefully) drive the costs down of some of the Rank 7 legendaries as well. They could put the Essentia behind the revered reputation as well so we don’t see bot farms crop up and just chest farm all day to turn that flux in to Essentia.

There’s a new item on the enlightened vendor for 3000 flux that gives you enough mats to craft a rank 7 legendary minus the base item. 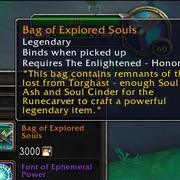 I have so much flux in my pockets I don’t know what to do with it! I feel that it should either be made BoA or the bags you can buy from the vendor should be BoA… or add something else to the vendor that would be useful and BoA

They should do a legion style crafting mats vendor

At this point in the patch I’m feeling quite happy with gear acquisition now that the Creation Catalyst has opened, but there’s still an abundance of Flux with nothing to spend it on.

Something I would personally enjoy is an alternate way of getting sockets which can also serve as a way to dump Flux.

For example 15k Flux for a Socket.

I also sit on a pile of like 80k flux and I have no idea what to do with it, while I’m still getting more and more from all kinds of content. I’d love to spend it on:

Also got an issue where my alts are really struggling on Flux and honestly I don’t care to farm it on them. Would love a way to transfer it across characters.