Those were zombies. The abom was a glyph for your ghoul and also a PvP spell.

I used to main an orc death knight as my redside main (she still has the best gear out of any of my toons), and I’ve always been a PvP junkie, so that’s probably where that’s coming from.

Shadowlands (and, to be fair, literally everything else) completely decimated my “serious” play of the game and needing a main. But I might get back into it for Dragonflight. Depending. A lot of extra customizations for my toons and some Darkfallen looks might refresh my zeal (HINTHINT).

Yeah I’ve finally switched back to priest after a long stint as DK. The changes to the Ebon Blade this xpac have been too much for me to bear.

Shadowlands is just in a box for me labeled “Don’t Think About It Or Your Brain Will Start To Smell Of Toasted Electrical Wire,” and that’s where it lives.

Unfortunately going from “we are the lich king’s jailors and we’re only doing what he says because otherwise he’s going to unleash the Scourge” to “the Lich King is our unquestioned leader and has very open Alliance sympathies” is too big for me to ignore.

They got rid of our ability to have abominations and geists as unholy DK and I’m still annoyed about it.

Maybe you’ll get that back with the Dragonflight talent revamp! Fingers crossed!

I want to play an abomination.

There’s a joke about you being a dwarf in there somewhere. (No hate, I have 4 female dwarves and 3 female dark irons lol)

And Fallyn, I looked in the OP when I was making the thread but didn’t really see any easily postable images for it, which is why I opted to go with the supplied “Darkfallen Skin” the people helping with the thread supplied.

Like I said in the post, I know you guys would prefer an Allied Race, and made sure to include a note about it, and that if Blizzard decides San’layn would never be an AR, then I assumed y’all would prefer customization to fit the fantasy than nothing. I can remove that line if it’s not true though.

Also, in regards to the quote someone came in here with - I said it in reply to two people who tagged me in the blood elf thread just to attack me without even reading the thread. It was a snarky joke towards the people who decided to be incredibly rude to me for no reason, and I apologize if it came off mean or spiteful. I assume you know by now I make jokes like that a lot.

And Fallyn, I looked in the OP when I was making the thread but didn’t really see any easily postable images for it, which is why I opted to go with the supplied “Darkfallen Skin” the people helping with the thread supplied.

I’m glad, at least, they didn’t go through with the threat. At least there’s that. I will acknowledge that I appreciate this work being there.

In terms of customization, yeah, I personally would be fine with it. Not the best outcome but better than nothing. Though I’d love it through a Night Warrior-like questline to include lore as well. It doesn’t have to be too long or anything, just… it’d be nice to have story ties. And it’d satisfy those who rightfully want lore explanation.

It’s a pipe dream but I’d love a ‘cloud of bats’ mount. It’s a shame no such mount was given through the Venthyr. The bat models from Revendreth, however, are very cool. I will say that. I have it on this character and it looks lovely. I never realized I wanted a ‘saber tooth bat’ until I saw it.

Here you go, I didn’t want to pester by a direct response, but I said that and do appreciate not going through with the perceived threat. I do appreciate the apology and the inclusion in that thread. I know some folks were wanting some runes mentioned for blood elves as well, like seen in the BC image on the blood elf male, so I figured I’d mention that too. 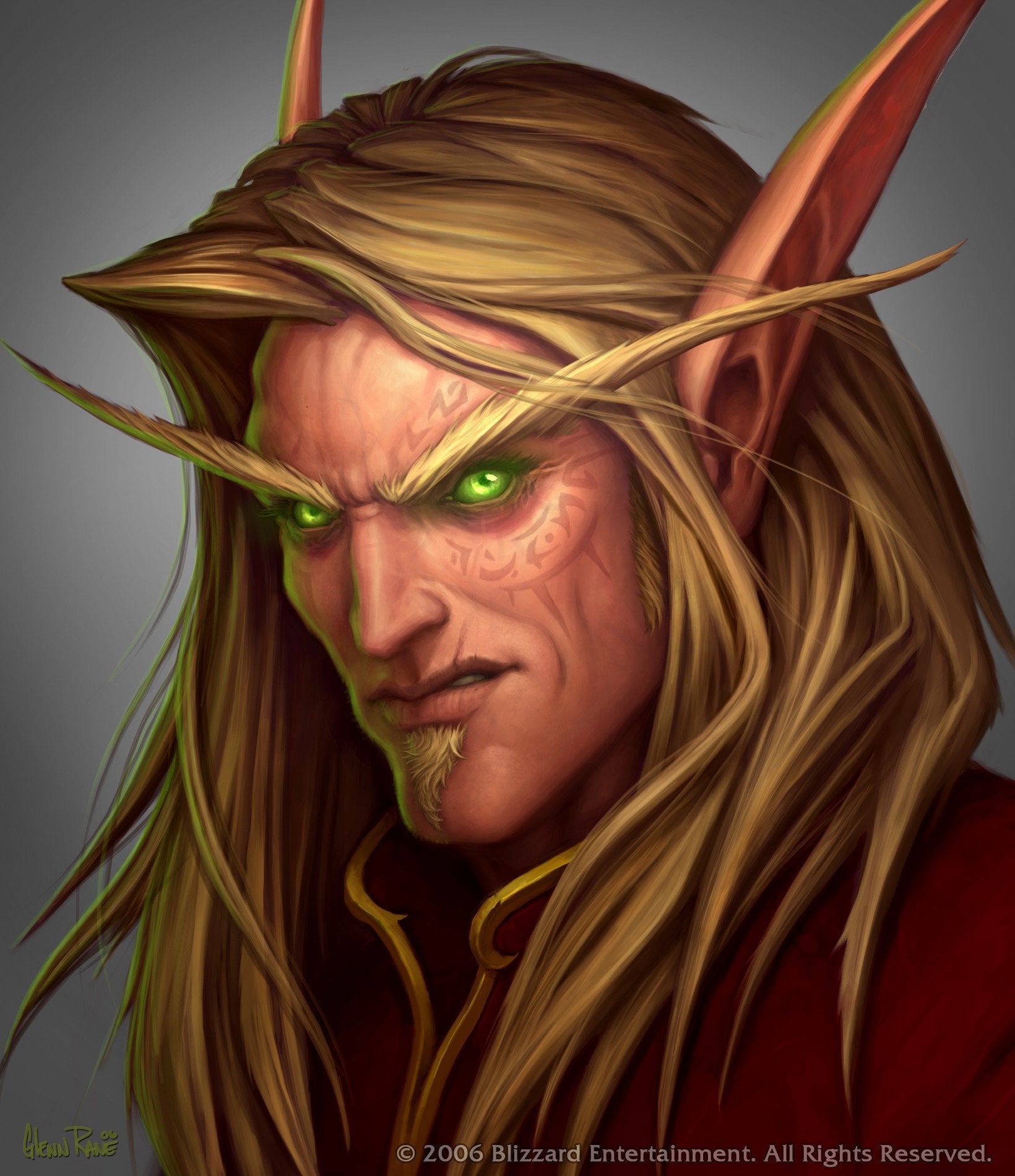 As for easily postable images, there’s some in the arrows but the ones people tend to like the most are these ones: 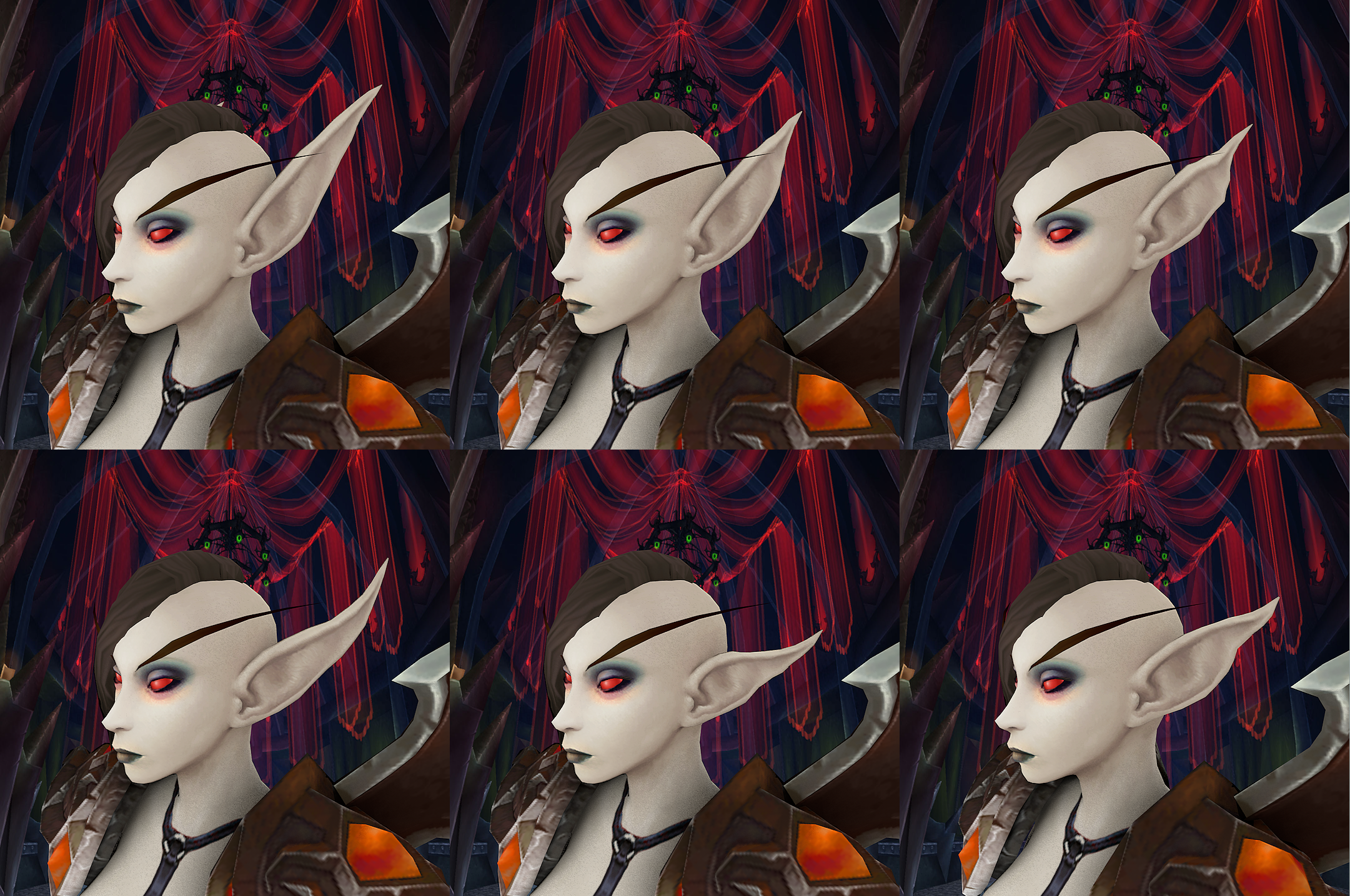 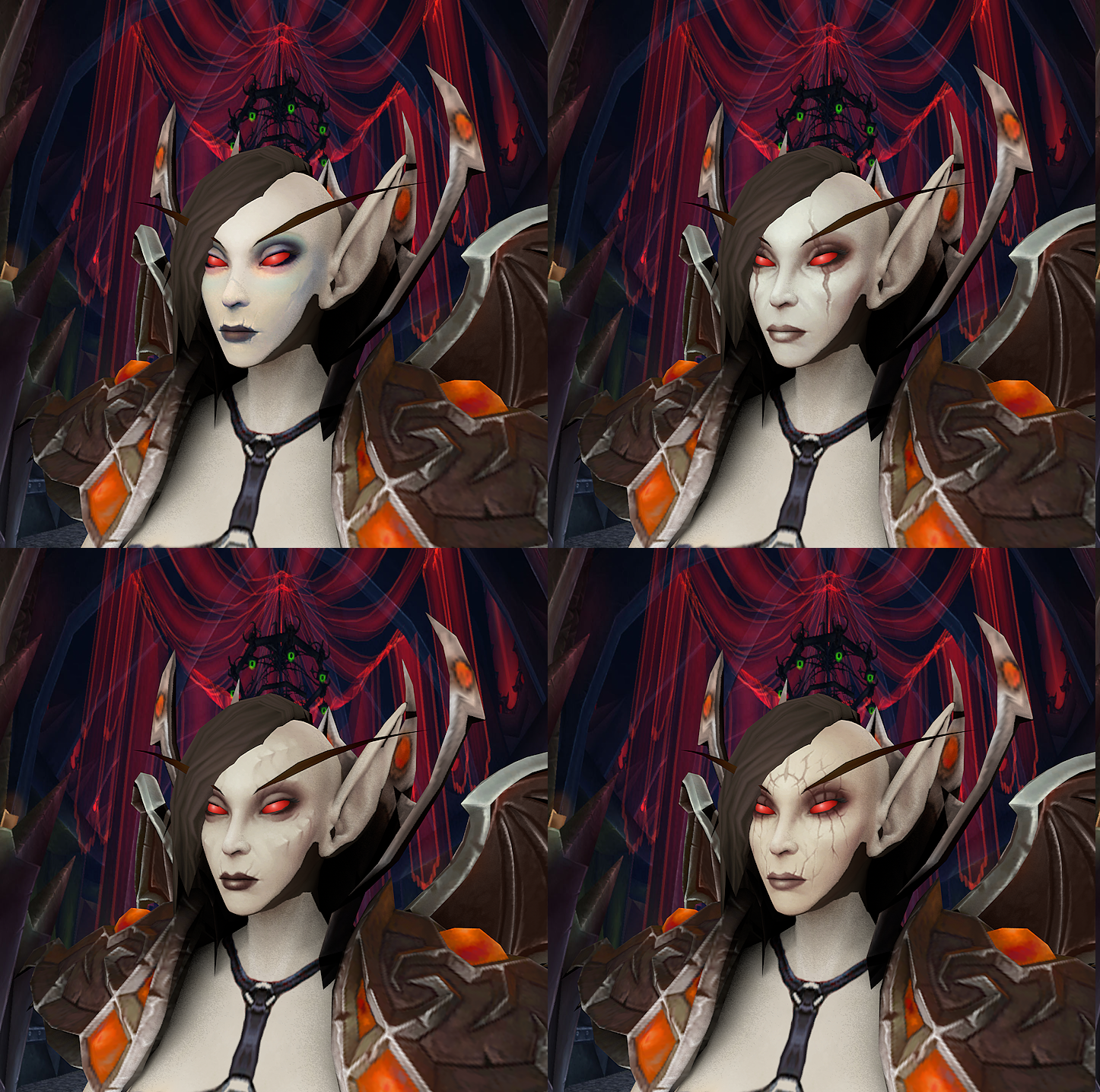 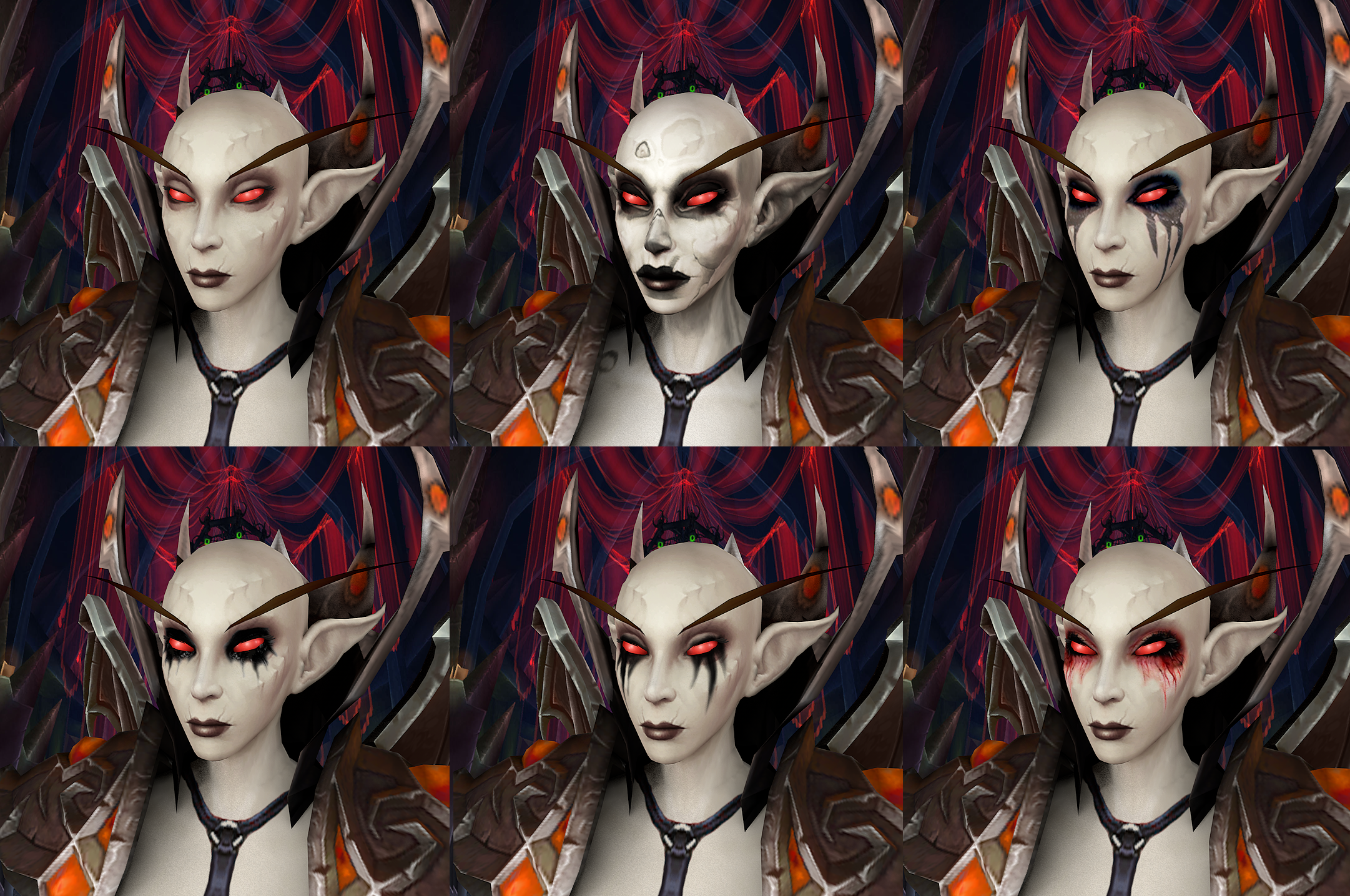 This could all be customization on blood elves, yeah. It’d be cool if it was included in some sort of Night-Warrior-Like questline, though, so we’d get some good lore with it too. Though some don’t think lore is necessary, which is understandable, but I’d love if it was added for flavor. I’d also love to see fang variations, but it might be pushing it. Regular, double, all-tooth fangs (like illidan and goblins). I have art examples of my characters, but not models like that.

Credit to that model art is to: https://twitter.com/ZombieQualia

I have a youtube video I made in 2018 with even more on it too, which people seem to enjoy.

I shall add them tomorrow. I’m in bed right now on my phone and it’s just a pain to navigate the forums, let alone copy/paste stuff on a phone. Lol.

Yeah very fair. There was an imgur album with the San’layn stuff that I lost, but thanks for checking in for images!

Edit: Oh also I’m a fan of Vulpera and know some folks might have some great suggestions in this thread!

Hello! Just making a thread (Haven’t noticed any.) For any customization ideas pertaining to Vulpera! Some personal ideas: New fur colors like a dark brown for example Scar options, maybe some swipes or burn marks based on being attacked by Sethrak Different fur types like more fluffy fur, more shaggy fur, etc. Mainly would effect tail and top of head New eye colors, would love to see that blue and green heterochromatic one from Humans New patterns, maybe something runic! More…

I shall add them tomorrow.

Figured I’d quote again so you’d see for those folks!

I have a youtube video I made in 2018 with even more on it too, which people seem to enjoy.

Absolutely crazy to think it was 4 years ago now, by the way, that I made that video. Whew. If I ever made gaming videos again, I could use my png character for it that I use on my Backrooms/SCP narrations channel. Lots of work, but it’s fun when it comes out.

I want to play an abomination.

This has been my suggestion for a necromancer tank spec.
You take over control of the abomination minion during combat and your character takes a minion caster role. Sort of like bear tank with a minion.

It was a snarky joke towards the people who decided to be incredibly rude to me for no reason, and I apologize if it came off mean or spiteful. I assume you know by now I make jokes like that a lot.

Cool, good to know. I wasn’t sure what the context behind it was.
I’m going to edit out my comment I made having seen it without knowing the context.
Glad to see someone is trying to bring awareness to the allied races and customization.

Wait a second… did you race change or have you always been a draenei?

Edit: Oh also I’m a fan of Vulpera and know some folks might have some great suggestions in this thread!

Vulpera have the second lowest customization, only after Dark Iron, so they definitely need some love. Since I deleted all my horde yesterday to make room for more toons on Proudmoore, I genuinely don’t know if I’d make a Nightborne or a Vulpera if I made a new Horde.

Absolutely crazy to think it was 4 years ago now

I had to do a double take when I made the class combos thread yesterday. Twelve Years since Cataclysm. Twelve. What even.

This character has been a draenei since I made him…uhh, I’m not even sure how far back.
Huh…apparently he’s been around since at least Jan 17, 09 according to one site.

I think I thought you were a human for the longest time because of your other helm and just never noticed.

Very possible. For a large part of BFA I had that alliance warfront plate set, quite liked it.
Then most of shadowlands I’d been wearing the Kyrian plate.
Think in Legion I had more of a draenei set going.

Thanks for sharing the love for customizations! More options and more character types we can make means more fun!

Got out of bed to edit it real quick cause the BErs flagged one of my posts, just in case I get silenced, don’t wanna leave y’all hanging.

Updated it with the bat-like ear and eye markings in the list, and added the images. I assume Scars would encompass the facial markings in combination with the image.

Also added the Vulpera requests I could see in the thread.

If there ends up being an equivalent to helfers can I move that the term be “bears”?

Also I’ll check the discord logs, but I don’t think any of our guys would have done that.